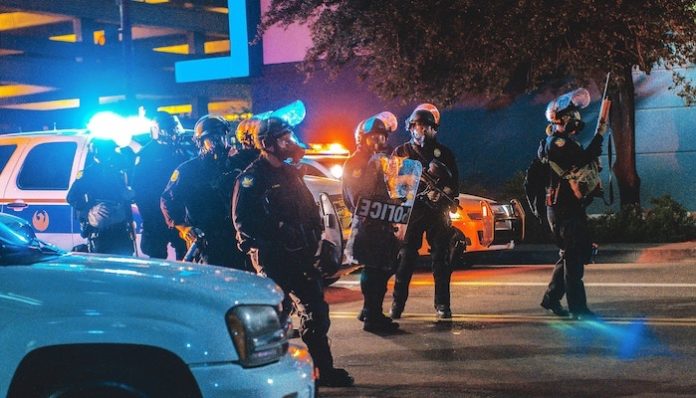 As the girlfriend of a police officer, there is a constant worry that is only amplified when a disaster is bound to hit.

For example, when Hurricane Florence was making its way towards the East Coast several months ago. My heart was in my stomach thinking about all that could happen to my boyfriend. He isn’t just a police officer, but also a member of the Coast Guard reserves. So if a storm hits hard enough, he’s pulled out to work relief efforts and put right in the center of harm’s way.

It’s honestly one of the most anxiety-ridden moments to be living through.

He goes to work for 12 hours at a time, most of which I do not hear from him. So if I don’t hear from him by the time he gets off, my mind instinctively assumes the worst. Despite the fact that it is very unlikely for anything bad to happen to him, the dreadful what-ifs are always on my mind.

What if there’s an accident?

What if something happens to him?

And what if he’s injured?

What if he’s shot?

What if he’s killed?

I am generally an anxious person, so once he got on the streets, this only increased. The fact that he can be a thrill seeker doesn’t help either. However, I can’t blame him for the fact that he’s excited to be hands-on in his career.

Nevertheless, especially during the night shift month, I can’t go to bed without praying. I ask God to watch over my boyfriend and keep him and the rest of his squad safe. I like to keep the following verse in mind. Philippians 4:6: “Do not be anxious about anything, but in everything by prayer and supplication with thanksgiving, let your requests be made known to God.”

I’m still trying to navigate this situation as best as I can every day. The one piece of advice I can give to other SOs in a similar situation is to communicate your fears.

My boyfriend was raised in a military and law enforcement family, so he has literally grown up with the knowledge and experiences he’s living with now. I, on the other hand, know nothing about this life. So I’m constantly reminding him that he has to simplify it or else I won’t understand him. He makes sure to call me on his way to work and out of work so I know everything is okay. That way, I can ease my mind.

We’ve found a system that works for us so that I always know he’s okay when I go to bed and get up in the morning. It makes it so much easier, especially when our schedules are opposite during the night shift periods.

Something that might not be comforting or helpful to others, but works for us, is that he tells me about his day — we constantly talk about our days instead of ignoring the idea that something did happen.

I’m not going to lie — some days are harder than others. But most of all, I’m grateful that he is so strong and caring during this adjusting period (because let’s be honest, I have no idea what I’m doing!).

We’ve been working on this new life of ours for the last two years that he’s been an officer. While every day is different, I wouldn’t have it any other way.