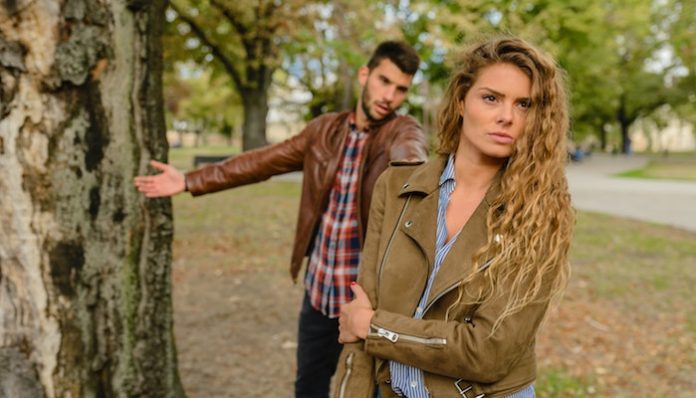 You two texted, you flirted, you slept over, and you knew every detail of his life. But despite the relationship-like bond you two shared, you never got to the next stage. Owch. But as much as it hurt to realize that you will never be his girlfriend, it hurt even more when your almost boyfriend suddenly moved on with someone else.

I would say that him getting a new girlfriend hurts almost as much( if not more) than when you ended things. It opens up old wounds that you thought were closed.

You’re pissed you got fooled. You thought he wasn’t the relationship type or that he just wasn’t interested in being in one at the moment. Turns out, he is capable of committing himself to a relationship – just not with you. That freaking hurts and proves that you weren’t important enough to him.

What you thought you had with him is completely discredited the moment he finds someone new because you clearly weren’t as special to him as you thought. You were just a meaningless fling. He was your almost boyfriend. And his new relationship is proof.

Sure, you were never official so you shouldn’t take it to heart. But your mind still wonders why she’s good enough for him while you weren’t. You want to take the high road and be unbothered, but you are too freaking pissed to think logically.

Part of you will also be insanely jealous even if you won’t admit it out loud. That girl he’s posing in pictures with could have been you, it should have been you. Meanwhile, you never got a picture with him because it felt as if he wanted to hide you from the world so that no one knew of your existence. You’ll creep on her social media pages for as long as your bruised ego can take it. You’ll show the pictures to your friends so you can shit talk her for hours on end.

You will never fully get over the fact that he chose her over you. It won’t matter whether she’s prettier than you or not – you’ll convince yourself that she has something special that you just didn’t have. It’s so catty to say that we judge other women in moments of hurt like this, but we do. And for the rest of our lives, we have unwanted hatred towards her even though she did nothing wrong but take your “man.”

Afterward, you question everything that happened with him. You overplay scenarios like it’s your day job. The over-analyzing kicks in and next thing you know, you’re subconsciously looking for signs that he was unhappy. You convince yourself that you missed them and that’s why he left. So you’re brought back to it all over again. It’s as though you are now realizing how stupid you were for missing the blatantly obvious signs and now you feel alone, ugly and dumb.

Then the real questions flood your mind about him as a person. After you’ve beat yourself up and endured enough torture, you ask yourself, “If he wasn’t the relationship type, why did he date me?”

Focus soon shifts to how good you were to him and how unappreciative he was of you despite all that. You made him laugh. You did kind gestures. And more importantly, you two had a good time together – you even got him hard all the time. Clearly, he was physically attracted to you. But soon, it cycles back to questioning why you weren’t good enough for him to actually want to date you.

Then, you’ll feel stupid for being so upset about everything. The realization will hit you as you wipe your tears looking in the mirror. He wasn’t into me in the first place, why should I care? It’s not like he was my boyfriend.

But you know what? You’re still allowed to feel that way because he had an impact on your life. You were truly hoping that one day he would choose you. It will hurt to realize he’s potentially moved on before you have. But you’ll get over it after you mourn the loss of what magic you had for a second time.

After all is said and done, at least you will finally have your answer. He probably was never going to make your relationship official. It’s also clear that he will never be your boyfriend, even if he breaks up with the new girl. You simply can’t risk having him back. As much joy as almost relationships bring to our lives, they cause constant confusion. So take the answer you finally have and move on with your life… After you’ve healed from the break up all over again.