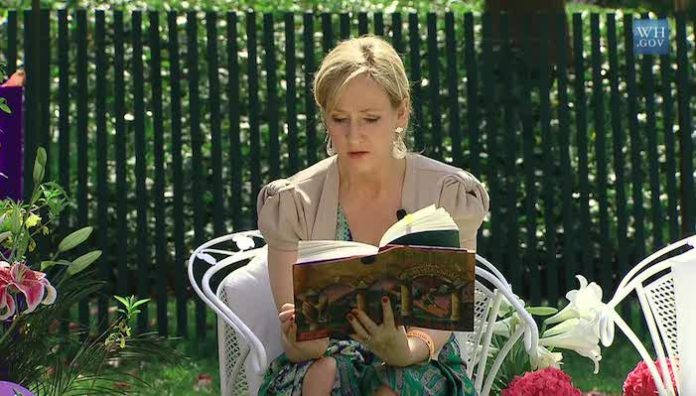 In the media blitz that has surrounded the general election, it’s not surprising that this little nugget skipped the news cycle, but here it is nonetheless: Following a court ruling that a woman’s right to express transphobic ideas is not a protected characteristic, J.K. Rowling, renowned children’s writer, decided to come out on the side of the transphobe.

For those of us who grew up loving her books (then fell out of love, then got back together with them again), this is disappointing. However, it’s not even a little unexpected. Really, the truly sad thing about this whole affair is the fact that we, her progressive audience, tried to make excuses for her for this long.

Not convinced? Here are 7 reasons why J.K. Rowling isn’t as progressive as we’d like to believe:

1. This isn’t the first time she has expressed transphobic views.

Back in 2018, her publicists tried to pass off her liking of transphobic tweets online as the author making a mistake due to holding her phone incorrectly. Setting aside the fact that this is a totally nonsensical defense (really, an experienced author and tweeter hasn’t figured out how to buy phones that suit her needs?), how did Rowling even see that specific tweet? Did it just pop up on her newsfeed? How is it that, from all the stuff on her feed, she accidentally liked a transphobic tweet of all things?

2. LGBTQ+ support… but only retroactively.

Retconning Dumbledore as gay can be excused if you squint. The publishing industry wasn’t what it is today! What was she supposed to do within the confines of a children’s book?

IDK… maybe write Dumbledore as a husband, the same way she did for her heterosexual characters? Or show another set of characters in that infamous Book 7 epilogue with a same-sex spouse? Why is everyone gay… but only off-page?

3. In fact, she loves to retcon progressivity in Harry Potter, even if it is a stretch.

There was a bit of furore when a black actress got cast as Hermoine in the play “Harry Potter and the Cursed Child” and Rowling said that “idiots were going to idiot”. Great — she lent legitimacy to the directors and cast members who received racist abuse online. But then she decides to add fuel to the fire by pointing out that Hermoine’s skin tone was never mentioned in the books. Giving validity to headcanons, but never making up her mind about it — how very progressive.

4. The wonderful world of Harry Potter is wonderful… if you are white.

I’m hardly the first person to have noticed that the major characters in the series are unambiguously white. Moreover, POC are delegated to the background, at best, or treated as objects to be fought over (at worst). Nagini is easily the worst example of this – her backstory in “The Crimes of Grindlewald” would have been terrible anyway, but Rowling’s insistence that this is cannon makes it even more baffling. Which brings me to…

5. Even when given the chance to be progressive, she is not so.

When Rowling has had an opportunity to write non-cis, non-white characters, she has miserably failed to do so. The Silkworm is a particularly egregious example of how not to write trans characters. Even if you said that the narrator of those books is flawed (and boy, is Strike flawed) you still have to wonder why none of the other characters offers a counterpoint or challenges him on those assumptions. Especially when they have done so on multiple other occasions.

Having a Young Dumbledore in the Fantastic Beasts movie was sure to be a fantastic way to have on-screen confirmation of Rowling’s claims that he was gay. Especially since the bad guy from those movies is his greatest nemesis/love interest. But no — not only is that aspect of the character shrouded in plausible deniability, it is the only queer relationship we are supposed to see in the whole canon. How is it that an author who is so involved in the developments of her novels just can’t get one hint of a queer relationship onscreen?

7. If you are a progressive, Rowling will write you as insufferable.

Who here remembers S.P.E.W. — Hermoine’s brief foray into SJW-dome? Don’t get me wrong — it was a good chance to give Hermoine some relatable flaws. However, why is it that this trait has to be explored? Ron had to overcome his jealousy and immaturity. Harry had to let go of his big hero complex. Hermione… had to learn how to chill and let magical slaves come to self-actualization by themselves? Really?

Rowling could do so much better.

Rowling is a fantastic writer. Even with all the stylistic problems of her books (pacing, plot holes, frustrating characters), she can spin an engaging story that keeps her readers hooked until the very end. She researches and describes things in meticulous detail… when it suits her. Yet, somehow, in all her years, she hasn’t sat down to read a thing or two about queer people? Trans people? Hasn’t sat down to think more deeply about race relations in the West?

Somehow, I’m not buying it.

It’s heartbreaking. Like many others, I was hoping she was just clueless for a very long time.