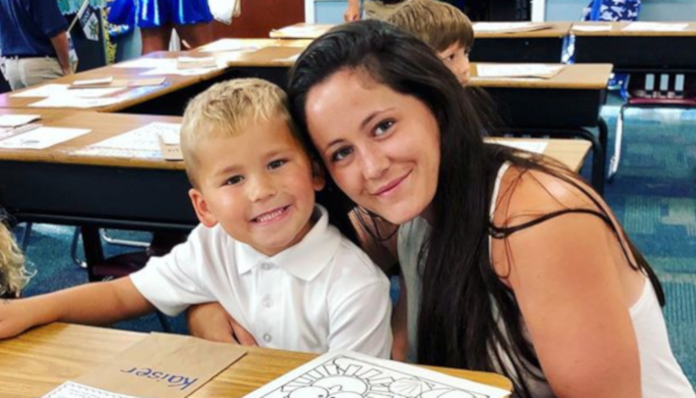 We can all breathe a massive sigh of relief in her honor, because Jenelle Evans finally filed for divorce from her husband David Eason. The former Teen Mom star ended her recent social media hiatus and shared the difficult, yet positive news.

Obviously, this couple is no stranger to making headlines. MTV ended both Evans and her soon-to-be ex, David’s, contracts over their appalling behavior. The couple also temporarily lost custody of Evans’ children this spring when Eason killed Jenelle’s dog, Nugget.

We’re also far too familiar with the couple’s rocky relationship filled with abuse, drugs, and child neglect. Fans have watched Evans defend Eason time and time again, claiming that past abuse allegations were all “a misunderstanding.” We’ve also seen her other family members and the father of her one of her other child both voice public concern for her safety and taking the couple to court to fight for custody to protect the children from potential abuse.

Past rumors of separation were later met with insistence from Evans that everything was “just fine.”

But now, it finally seems like Jenelle wants to take a stand for herself and her children.

“Nobody gets into a marriage expecting it to end but I know what is best for me, and for my kids.”

While some Teen Mom fans probably judge Evans for her announcement and past choices, I feel strong empathy for her right now. As a rape survivor and abuse victim, I know first-hand how difficult leaving an abusive partner can be. Abusers often convince their victims that the emotional or physical pain is somehow warranted. According to Craig Malkin, a Harvard psychologist, “People wind up blaming themselves for the abusive behavior of their partners. They convince themselves if they approach the person differently, maybe they won’t be abused.”

What’s more, people whose past contains other abusive partners, the cycle of self-blame intensifies. The National Domestic Violence Hotline states that people who experienced abuse during their childhood or youth are 15 times more likely to commit to abusive romantic partners.

It’s even more complicated to walk away from abusive partners when the relationship involves children because you want what’s best for them… even if that means enduring years of torture. Women want involved fathers for their children. I’m sure Jenelle thought long and hard if walking away would be best for the children and their overall emotional stability. Divorce can impact children in so many ways, which makes the already complicated emotions women feel when deciding on separation even more confusing.

So, before you judge Jenelle Evans for her past or her present, walk a mile in her shoes.

Personally, I look forward to following Jenelle Evans as she begins this process towards a happier, healthier life. I know that her track record may not look great, but it’s never too late for anyone to turn over a new leaf, especially an abuse survivor. I hope that Jenelle’s stand will help fill my heart with courage as I start the divorce process myself.