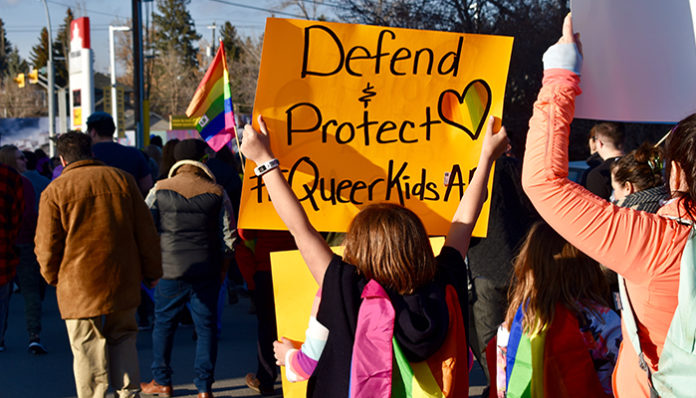 Folks, we need to chat. The older generation thinks that millennials become offended too easily. I hear things like, ”Political correctness has gone mad,” ”We can’t say anything now,” or ”Kids these days are too sensitive.” The truth is, though, we treat people far differently now, especially members of the LGBTQ+ community.

When I was a child, my parents always told me to treat everyone how I wanted people to treat me. They also told me to never hurt others. My parents never said that this kindness only applied to certain groups of people, so I share it with everyone.

Some people use religion as an excuse to treat gay people differently or exclude them completely, which confuses me. Then, they claim that their religious freedom is under attack when their actions inevitably come with consequences.

But, discrimination isn’t even the force that hurts LGBTQ+ people most.

Others’ invalidating responses to the homophobia we experience really hurts us more than anything else. Everyone brushes our feelings to the side and claims that we’re “too sensitive.” Then, people tell us that we need to accept that not everyone needs to agree with our “lifestyle.” What’s more, everyone tells us to treat these homophobes kindly, even as they tear apart a fundamental, innate part of our existence. They say, “You can’t fight hate with hate,” but they shower our bigots in love and ignore our feelings completely.

Let me make one thing clear: Our righteous anger and intense emotional reactions in response to homophobia is not hate. Rather, it’s a completely justified reaction to the homophobia we experience every day.

We need to stop acting like gay people have caused an equivalent amount of harm as do people who hold homophobic beliefs. We do not need to be polite and civil to people who choose to believe that there is something wrong with us when that belief is incorrect.

We do not need to coexist with people who believe we should not exist at all.

Thankfully, I’m old enough to know that homophobic opinions are wrong and that my sexuality is beautiful and natural. I love being a lesbian, I love my girlfriend, and I love the life we have created together. I would never change it, even if I could.

So, next time you comment on someone’s sexual identity, I ask you to think of these children. Think about whether their lives and mental wellbeing matter less than your belief that they can and should change. Because whether you mean to or not, your words are killing members of the LGBTQ+ community. We need to start accepting people for who they are, regardless of our personal feelings. We need to  let them live.