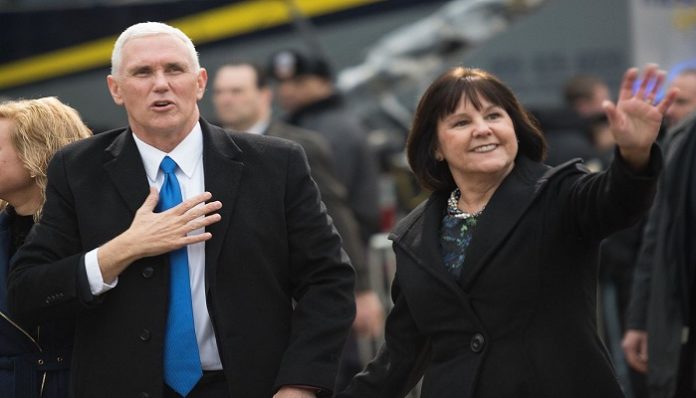 Second Lady Karen Pence has publicly announced her latest “exciting” news; that she will be teaching art at Immanuel Christian School in Virginia.

Although that statement may not sound like much, the reality of the school makes this whole situation absolutely repulsive. The school is like a real-life version of “The Handmaid’s Tale,” insisting applicants “live a life of moral purity.”

This pledge includes outright discrimination against members of the LGBTQ community.

School officials hold the right to deny any student admission or expel them at any time for “participating in, supporting, or condoning sexual immorality, homosexual or bisexual activity, promoting such practices, or being unable to support the moral principles of the school.” The document references a passage from the Book of Leviticus, claiming homosexuality is an “abomination.”

This statement is on par with previous moves made by both the second lady and her husband. Avid supporters of conversion therapy and other “treatment” methods for LGBTQ youth, the Pences have a clear stance on homosexuality. Vice President Pence supported a 2004 bill that would have reworded the Constitution to define marriage as “between one man and one woman.”

Karen Pence has been vocal in the past on her thoughts regarding homosexuality and LGBTQ rights. The Second Lady claims that homosexuality is a “medical disorder” that could “be cured through therapy and prayer.”

Anyone who identifies within the LGBTQ community knows, though, that this is not true whatsoever.

Mrs. Pence also previously taught at Immanuel Christian for 12 years while Vice President Pence served in Congress. When asked to comment on this latest employment acceptance at a time when LGBTQ rights are constantly in the news, a spokeswoman for the second lady shared this:

“It’s absurd that her decision to teach art to children at a Christian school, and the school’s religious beliefs, are under attack.”

The truth is, though, questioning Pence’s decision is not absurd at all.

LGB youth are five times more likely to attempt suicide than their heterosexual peers. For non-binary or trans teens, this rate is even higher. Furthermore, fine arts classes, which are an excellent creative outlet for all students, can be a place of help and healing for students who struggle in other areas of the school building.

It’s absolutely infuriating to think that a woman who supposedly dedicates her life to teaching art would purposely choose a place to use her craft that excludes students simply based on their gender identity or sexual orientation.

How is this different than Pence teaching at a school that discriminates based on ethnic origin or socioeconomic status?

“Why not teach at a school that welcomes everyone, instead of choosing one that won’t serve LGBTQ kids, kids of LGBTQ parents?” asked senior vice president for policy and political affairs at the Human Rights Campaign, JoDee Winterhof. “The Pences never seem to miss an opportunity to show their public service only extends to some.”

Why do we allow people like Mike and Karen Pence to hold positions of political power in the world? How do we continue to support people who make it clear that they are happy supporters of discrimination? Why do we continue to settle for oppression for our children and the future of our world?

5 Signs It’s Time To Set Boundaries With The People In...