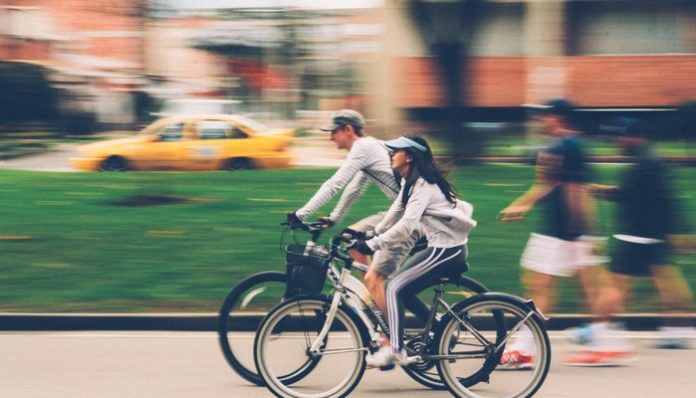 For many people, learning to ride a bike is a rite of passage, a skill that we learn early in childhood and carry for the remainder of our lives. It’s believed that, no matter how much time passes, you can always get back on a bike and simply go.

If I close my eyes, I can picture my first bicycle: brightly colored with white tires and training wheels. I gleefully accepted it from my grandmother for my 5th birthday. I remember riding in circles on the concrete slab out the back door of our Michigan home. Once the training wheels came off, I almost instantly tumbled, skinning my knee and wounding my pride. I quickly bounced back, though, and kept developing my ability to ride. Destined to become the perfect cyclist, I practiced tirelessly until I mastered it.

Once skillful enough, I would ride up and down the street, through our backyard, and even to the Dairy Queen or nearby playground. I loved the wind rushing through my hair, the texture of the handlebars in my hands, the circular motion of my legs, the woosh of the tires on the pavement. As I grew, so did my bicycles. I continued to ride even after moving to Tennessee, even when I started college.

Eventually, though, my beloved purple bicycle sat for days, then weeks, on end, simply chained to the rails outside my apartment building. The desire to ride left my body, the flame of thrill inside my heart suddenly snuffed out, unable to reignite. I lost the love of riding, replacing it with something new.

How could something that once brought utter joy and freedom no longer be important? What caused that flame to die? How could I suddenly just let go of one of the longest loves of my life?

Riding a bike now leaves me full of shame where there once was joy, pain where there once was pleasure. Sometimes, out of desperation with a twinge of desire, I mount my bike and try to make that connection once again. I’ve attempted various styles, speeds, and durations…yet nothing makes it right, nothing rekindles that flame. I often throw the bike down angrily after the ride, hating myself for letting our relationship become so distant and estranged.

They say it’s like riding a bike, yet that phrase only brings up painful memories of a love with which I’ve lost touch, a friend who I let go. All I can do is observe my bike inside the garage, collecting dirt and rust, too emotional to sell it but too hurt to try again.

The reality is, however, it isn’t just about the bike at all: the relationship with my beloved bicycle mirrors so many other relationships in my life. Relationships that once were unbreakable eventually break, loves that were unwavering simply fade away. Am I the only one who has this struggle, the only one who loathes this pain?

Initially this left me heartbroken and almost suicidal because I never want my relationships to end, it breaks me every time. As I think about my bicycle, though, I see the truth in my friend’s words. People grow, we all evolve and change throughout our life. Relationships, be them friendships or romantic interests, take constant effort to maintain, yet sometimes we simply do not have the energy or desire for the upkeep. If you find yourself at the end of a relationship, or even just losing touch, don’t beat yourself up or consider it a failure. There’s always a reason for the fall, and once your skinned knee heals, you’ll be able to mount the bike once more and ride onward.

50 Little Reminders For When You’re Struggling With Self-Love