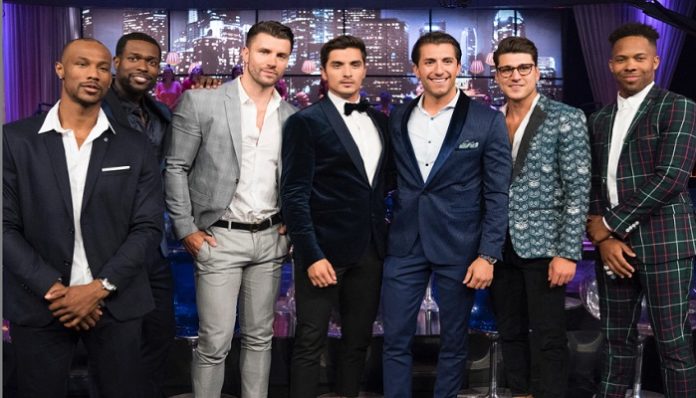 It’s that time of year again! The Bachelor World’s temporary off-season has ended, and in two weeks’ time we can grab our wine, our snacks, and lose a little bit of our dignity on Monday nights once again. Becca K.’s Bachelorette season is upon us, premiering on Monday, May 28th. If you somehow missed last season, Becca K. was initially chosen by Arie Luyendyk Jr. (Bachelor 2018), only to be broken up with a few short weeks later for the runner-up, Lauren Burnham. Though this was an incredibly heartbreaking and humiliating situation, Becca K. (who from now on I’ll be addressing as Becca; there’s only one now!), handled it with grace, and of course the public rallied behind ABC’s decision to cast her as the new Bachelorette. Here are her boys:

Alex is 31 and a construction manager from Georgia. He sounds fairly active, with mentions of “hitting the slopes.” He also has a dog, and I think a boat?

Blake is 28 and Sales Rep, and his bio reads, “Blake considers himself a modern romantic who believes that two people need to be independent in order to truly love each other.”

He is 27 and played baseball before. Now he’s in advertising. He “embrace[s] wherever life takes him.” I wish Chase would stop embracing life and start embracing the top buttons of his shirt.

He is 30 and a Sales Trainer (what is that), and though he is “originally from New York, [he] has embraced the sunny Florida life since he was a kid!”

He is 31 and a “Former Harlem Globetrotter,” and while the “former” aspect of that does worry me, I do like that according to his bio, he just e-mailed the Harlem Globetrotters one day and that’s how he got in. I like your gumption, Christon.

I like 28-year-old banker Christian. He seems relatable. Maybe it’s because he claims his biggest date fear is “spilling something on himself in front of our Bachelorette.”

Colton, 26, is a “Former Pro Football Player.” I still know nothing about this man, although I like his jacket.

Connor, 25, is a fitness coach whose hair is a little too high for my personal tastes. However, his bio reads that he used to play pro baseball, and yet his job title is not “former pro baseball player.” Hooray! Thank you Connor!

Darius is 26 and Pharmaceutical Sales Rep who loves to dance. I take this to mean he loves to go to the club. He wants to “live a life of service by giving back to others.”

He is a “successful” businessman, who enjoys “fitness, golfing, skiing, and spending time with his family at their beach house.” So basically, he has a rich family. He also “loves guacamole, but hates avocado.”

Grant is a 27 year old electrician. His bio reads he “has a great sense of humor,” which I hope is true. Although, I’m docking points for the electrician-based pun “there will definitely be sparks with Grant!”

Garrett is 29 and a Medical Sales Rep. If I was a betting girl, I’d say he makes it to the top 5 and no further, as an affable, fun-loving side character who there just isn’t enough passion with.

Okay, Jake, 29, is all over the place with his brand. First, he goes for the farm-boy role, claiming he grew up in a rural area riding dirtbikes. Then, he plays the daredevil, claiming he’s jumped off the “third-highest” bungee jump in the world. Then, he tries to be artistic soul, telling us he likes to write poems. He finishes it off as the life of the party, saying he likes the dance.

Jason, 29, is a “successful banker with a heart of gold.” He likes sports and singing Disney songs. Sounds like my personal nightmare.

Jean Blanc is 31 and a colognoisseur, which is not a job. The most interesting thing is that this guy has a Master’s, went to Duke, was an engineer, and yet “colognoisseur” is his title?

He is a 31-year-old grocery store owner from Chicago, and is “successful in produce, but unsuccessful in love.”

John is 28 and a Software Engineer, but most importantly he makes world-famous banana bread. Well, I guess we all knew that since it’s so world-famous, so it was kind of redundant for John to mention it.

Jordan mentions his personal mile time and favorite modelling pose (“the pensive gentleman”) in his bio, so that should tell you everything you need to know.

His bio says he’s a Social Media Participant, can I use that on my resume?

Leo, 31, is a stuntman who loves that “messy bun” look, yet for whatever reason chose not to rock it in his cast photo.

Lincoln, 26, wants a big family so “he can make his mom proud,” which I hope isn’t the only reason. His fun fact is that he was named after Abraham Lincoln. Wow! So fun.

Mike is 27 and a Sports Analyst. He loves “festivals, horse races, and state fairs.”

Nick looks, to me, like he was a member of a boy band that was popular 15 years ago. He is described as a “fun-loving attorney” (oxymoron?) with a “zest for life.”

Rickey is a 27-year-old IT consultant who shockingly enough has nothing out of the ordinary in his bio. He dreams of finding a best friend to fall in love with. Don’t we all, Rickey?

Ryan, 26, earns points for looking cute in his cast photo, for playing multiple instruments: banjo, trombone, ukulele, and guitar, and for (I think) having a sailboat.

Trent, 28, moved to Florida of all places to build his modelling career, which makes me question his judgement. He has been on the cover of romance novels and catalogs, so he’s a big-shot, but don’t worry; he still has that “sweet Midwestern charm.”

We’ll see how right (or more likely, wrong) I am as The Bachelorette unfolds this summer.

Why You Need To Learn To Enjoy Your Own Company