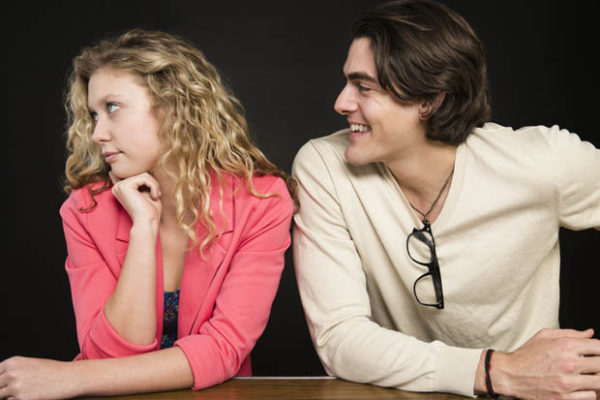 The other day, I was walking by a local bar on the way to catch a bus. I was dressed up to go out–skirt, top, heels—and, at 8pm, it was beginning to approach nightfall, but it was still a far cry from being late at night.  This particular area, while frequented by some sketchy townies, is super well-lit, usually populated, and directly across the street from the firehouse, so I walk by it pretty often. As I walked by, this middle-aged, snaggle-toothed, cigar-smoking, beer-bellied, Larry the Plumber-esque whackjob yells (in his slurred voice), “Hey babe, nice ass you got there!”

Hold the fuck up, Larry. Do I know you? Did I ever tell you that it was okay to comment on my body? Did I come up to you and specifically ask you, “Larry? Hey, how does my ass look in this skirt?” No.

But it’s cool y’all, I just yelled back, “THAT’S WHAT YOUR DAD SAID LAST NIGHT” and continued on my way.

Wait a minute….no, I wish I had spoken up and given him a piece of my mind. But instead, I did what I have been told to do time and time again—give him a tight-lipped smile, ignore him, and move along.

But hold on…why am I supposed to ignore him, again?  Clearly he has no qualms about yelling his opinions in the middle of the street, so why can’t I? Why has society taught me that he can yell whatever the hell he wants at me, but the appropriate thing for me to do is to just move on and ignore it?  Of course, if your safety is a concern, such as if you are walking by yourself late at night, it (unfortunately) is safest to just ignore such remarks and not risk escalating matters. But even in times when your safety is not nearly as compromised, such as when you are at a bar and some guy leans in and whispers something vulgar in your ear, it is still deemed most appropriate by society for you to say nothing.

You see, society has placed such a high premium on women being ‘nice at all times’ and ‘never saying a mean word to anyone’ that the art of standing up for ourselves is something that is completely foreign to a lot of us.  This is a problem, of course, that has probably run generations deep; if our ancestors were considered property and forced to wear chastity belts, it’s a pretty safe bet that they weren’t allowed to speak their opinions either.  But we’re not considered property, and we’re not forced to wear chastity belts. So the question remains: why are women so afraid to be anything other than nice, even when our safety is not being jeopardized?

For the record, I’m not saying that anyone has taught me that I need to be nice to those Larry the Plumber-type guys or the creepy guys at the bar that think its okay to actually grab my ass or what have you. But I am saying that this “nice-girl culture” has made it so hard for us to be anything but quiet. For many of us being mean is a completely weird, foreign experience. Even a simple, “Please don’t talk to me like that,” can leave you with sweaty palms and shaky hands afterwards. It shouldn’t be hard for us to refuse to be nice to those that are not worthy –but it is.

I’ve heard many people say that they would prefer to ‘take the high road’ and not respond to crude or vulgar remarks. If that is what you prefer, that is fine. But I am speaking for those of you that have encountered harassment—on the street, at the bar, in the workplace—and felt so violated and disgusted at the time, but remained silent merely because that’s what society tells you to do. Because, unfortunately, saying nothing, ‘taking the high road’ and simply being too intimidated to speak up for oneself can end up looking awfully similar.

Oh and by the way, I am more than aware that I am writing yet another piece that focuses on what the woman should do, not the man. In a perfect world, I would be able to speak directly to the Larry-the-Plumber-type douchebags outside of the local bar and instead of telling you to speak up against them, I would be able to tell them to stop harassing you in the first place. But the Larry-the-Plumber-type douchebags are not going to be reading these kinds of articles. You are. I can’t speak directly to them, but I can speak directly to you, and tell you that it’s okay to stand up for yourself when the situation calls for it.

You don’t have to be nice to people that don’t deserve it.  Don’t ever forget that.

Why You’ll Never Deserve A Second Chance From Me

Spread The Love: 3 Simple Things That’ll Make The World A...