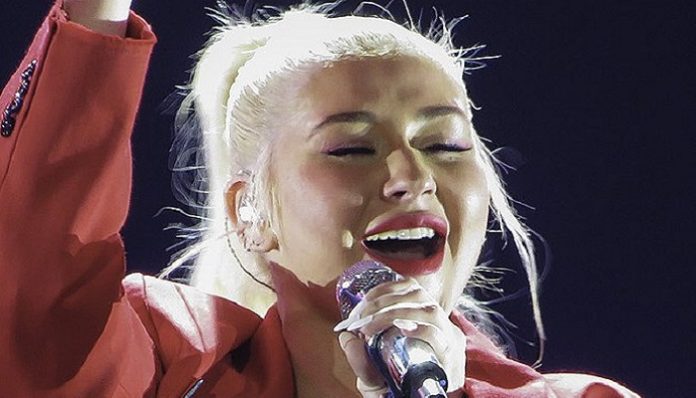 The artist formerly known as the “Dirrty” girl (and now the girl who bites the hand that fed her), Christina Aguilera, has dropped her new single “Fall In Line” featuring Demi Lovato.

You can check out Christina & Demi’s new collaboration below:

I guess the reason is because she and Demi are going to be performing it in Las Vegas at the Billboard Music Awards this Sunday.

At first listen, I was VERY confused by the weird chains and animal noises that were being played, and I thought it was another one of those “Yanny” or “Laurel” tests that have been breaking the internet over the past few hours. It also reminded me of Britney Spear’s song “Piece of Me” from her highly underrated album “Blackout” in 2007.

If you ignore the awful animal noises and weird beat, you’ll be able to hear true Christina Aguilera back in form. She’s soulful, her voice stronger than ever, and it reminds you that she once could have had it all. There’s no gimmick here, she’s truly “stripped” and “back to basics” (see what I did there).

Unfortunately for Christina, I believe that this song better suits Demi Lovato, the reigning queen of power anthems. The vibe and tone of the song is very reminiscent of ANYTHING featured on her smash hit album “Tell Me You Love Me” released last year.

The combination of their two voices, while beautiful, it often sounds like they’re competing against one another to see whose range is better and who can sing the best. I’m sorry but that’s not a duet, that’s just a competition.

Overall, the lyrics of the song are enticing, empowering jarring and meant to evoke true feeling. One of the best parts of the song in the chorus states “they’re gonna burn me at the stake/but I got fire in my veins”. Is this X-Tina’s way of saying that she isn’t giving up and going to push forward with her music career?

Either way, I’m pleasantly surprised by this single, much more so than her previous one, “Accelerate.” Here’s to hoping she puts on a killer comeback performance on Sunday.

Featured image via jenniferlinneaphotography from Denver, CO, USA / CC BY