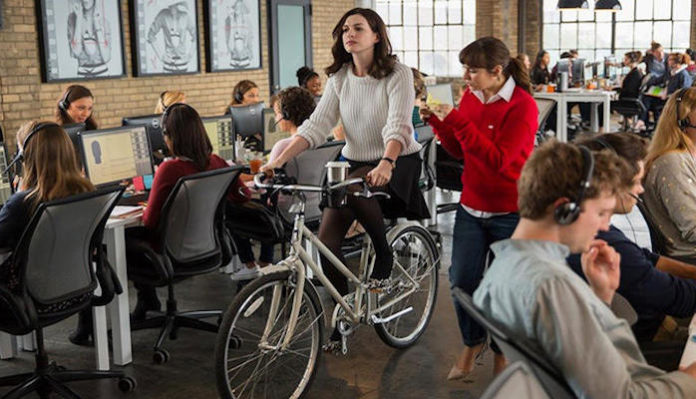 A job interview. A pair of heels. An ankle injury.

A perfect storm, a recipe for disaster, a nightmare scenario?

In a split second, an unnoticed step became a stepping stone to my perfect job.

I was just over a year out of college and, having embarked on a yearlong, fruitless job search that resulted in countless rejections, I grew more disheartened by my job prospects with each passing day.

Until clad in a black suit and a pair of patent leather heels, I stepped into a spacious office building for what would soon become a life-altering job interview.

I had previously been on numerous, unsuccessful interviews, but the moment I entered the office, something felt different. Beneath my typical trepidation, I felt prepared, ready, confident that this would be my last interview and this office would become my workplace.

My interviewer — my prospective supervisor — arrived and escorted me to her office, a snug room at the back of the building. My spirits lifted almost immediately as she revealed to me that I was one of only six applicants called in for a preliminary interview and my personality test results demonstrated I was a strong fit for the position. We immediately developed an easy rapport with each other, and, as I was interviewing, I could fully envision myself working for the close-knit company, with my interviewer as my supervisor. The interview, which was punctuated by friendly conversation, lasted for nearly an hour, but it seemed to pass by in the blink of an eye.

As the interview came to an end, I gave my prospective supervisor a firm handshake, thanked her for her time, and walked towards the front of building smiling, satisfied with my performance and in awe of my complete calm.

Little did I know that I wouldn’t be smiling for long.

I pushed open the door to the building, stepping out onto what I presumed was a flat expanse of concrete and completely missing the single step leading from the building to the sidewalk below. My left heel nearly caught the edge of the stair, but not soon enough, and I fell, losing my grip on my possessions, twisting my ankle and landing hard on my left leg. The pain was sharp and penetrating — completely unbearable.

I surveyed the scene, hoping and praying that no one had seen me fall. As I collected the extra copies of my resume and references that were strewn around me, discovered that my phone was mercifully unscathed, and winced from the pain pulsing down my ankle, my prospective supervisor rushed out of the building and found me huddled on the ground, trying my hardest to look “okay.”

“Oh my goodness, are you okay? Do you need any help?” she asked, slightly alarmed.

“I’m good! Thank you for asking!” I said, as cheerfully as I could muster, simultaneously trying not to grimace and feeling mortified that I had had a witness to everything that had transpired.

After several unsuccessful attempts, I pulled myself onto my feet, and slowly limped away from the building, with pain still searing through my ankle.

My ankle was twisted and my ego was bruised.

There’s no way I’ll get this job now, I thought.  I had one chance and I blew it!  Why did this have to happen to me?

But as I fell through one door, another door opened.

That night, I was scheduled to meet with a prospective respite client. If the client and I got along and the night went well, the respite job could become permanent.

My hope that I could ever find a permanent job was waning, but, armed with a smile and a freshly-iced ankle, I arrived to meet my client. Although I refused to keep my hopes up about the respite position, it seemed to be going smoothly, effortlessly, and it was the first time in months I had not experienced any anxiety on the job. This position felt right, but I refrained from believing it could ever be mine, lest I end up disappointed.

My disappointment set in a week later, when I discovered that the job for which I had interviewed on that fateful day, the administrative position I had envisioned myself holding, would never be mine. With my successful night of respite work little more than a passing thought, I felt completely disheartened by the loss of the seemingly perfect office job and lost hope that I would ever find a permanent position. It was unrequited love; I wanted nothing more than to work in the familial office with the kind supervisor, but it was not meant to be.  I had fallen hard for a company who did not love me back.

If I had never fallen, maybe I would be employed by now, I mused dejectedly.

But, a few days later, I heard back from the respite position, the position I never expected to hold. My intuition was correct; the night had gone well and the client was happy with me. The position was mine if I wanted it, and would eventually become a full-time, permanent job. I was elated.

In that moment, I realized that I ended up exactly where I was meant to be. After months of administrative temp work, I was not meant to work in an office any longer. I was about to live my dream of working with people with disabilities. As a woman with a disability, I had earned a position I was born to hold.

The moment I fell, my life fell into place. I had inadvertently fallen into my perfect job.

As you search for a job, you may feel discouraged by rejection, wondering if you will ever find the right position. You will. Life happens exactly as it is meant to. That “perfect job” you have long coveted may not be the best fit for you at the moment, but every rejection, every fall, will bring you one step closer to the job of your dreams. Never lose hope; your perfect position may be waiting right around the corner.

Trust that your life will fall into place.

Featured image via screengrab from The Intern