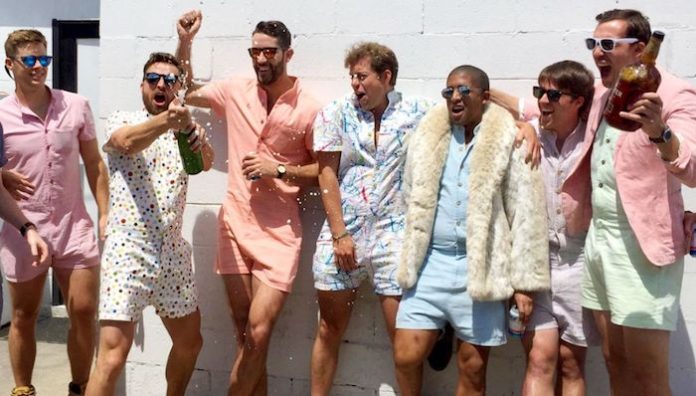 Rompers have been a HUGE fad for the ladies for years now. Coming in a variety of patterns and colors, it’s no doubt these one piece outfits have become a closet staple.

Since Rompers are such the perfect clothing item for girls, it’s no surprise that they came out with a male version called a “RompHim”, which is actually a kickstarter you can check out HERE. You heard that right, guys can now wear rompers too. At no surprise, these male rompers have received serious backlash from other sites stating that rompers are “too feminine” and calling the entire project a joke, but are they really that terrible? Take a look at their video below for yourself….

They are basically trying to position The RompHim as the new Chubbies. If you aren’t convinced and absolutely hate the idea of male rompers, here are a few things to consider before judging a guy for wearing a RompHim:

My fiancé is literally the worst person on the planet when it comes to matching his clothes. It’s like he has no concept of what matches, while I let it slide judgement free (because at least he tried right?), a romper will eliminate this constant clashing. So if you have a male significant other like mine, you know his outfit will always be on point.

Most girls don’t want to deal with the stress of picking out an entire outfit that is on-point, so they wear a dress or a romper to help solve that issue. Men are always looking for the easy way out, so why not let them wear a romper too? If he’s less stressed, you’re less stressed and life is all good. Just kidding, you’re probably more stressed at the fact that you may be wearing matching rompers, but at least you don’t have to listen to him complain about picking out clothes.

3. The humor behind it

It takes a special kind of guy to break the fashion mold and show up to the bar or party with a show stopping outfit. If he has the confidence to feel good in his new RomHim then you should let him because if anything all of us should have the confidence to wear the styles we want.

RompHim’s won’t be the worst thing to happen to this planet, but it won’t be the best either. While they may be beneficial to males, I think we can all agree they should be a little longer on their thighs. Also, any dude who wears a romper will seriously look like a douchey college frat guy that just won’t get over himself. So there are definitely some negatives to the idea of a male romper. Regardless, whether you like them or not, they may just be the next big thing in male fashion.

Featured image via The RompHim Kickstarter

How To Have A Banging New Year’s Eve Without Alcohol