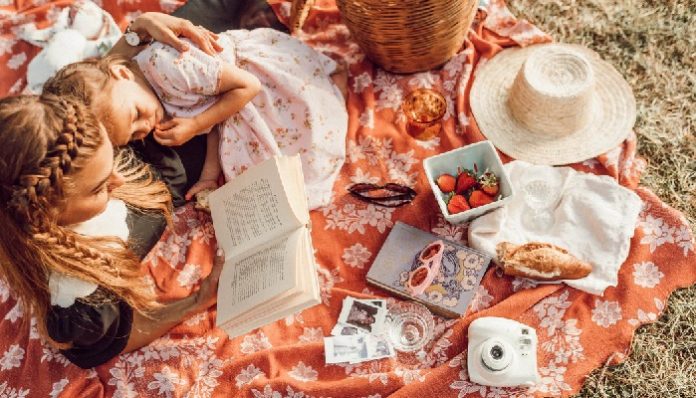 May is “Get Caught Reading Month” and we’re here for it. With Mother’s Day just around the corner, what better way to get caught reading, than by sharing some new reading material with your mom? You can read the books together, take turns, or maybe even start up a book club with your best friends and their moms? The opportunities are endless, but here are some of our favorite mother/daughter inspired books to get you started!

The Secret Life Of Bees

Sue Monk Kidd’s best-selling novel follows a young Lily Owens and her African-American maid, Rosaleen. Lily’s life has been shrouded in mystery after the death of her mother, a death that she has very few answers about. After Rosaleen confronts three racists in town, Lily and her flee to the town of Tiburon, South Carolina. Here they meet a trio of black beekeeping sisters who seem to know crucial information about her mother’s death. As Lily learns more about the mother she misses dearly, she also realizes that motherly love can come from other places. This novel explores the divine female power and will be one cherished by mothers and daughters alike for years to come. The book was also adapted into a film in 2008, why not go for both?

The story follows young Kimberly Chang, a girl who immigrates to Hong Kong with her mother directly into Brooklyn squalor. Kimberly immediately begins to live a double life, superstar schoolgirl during the day and sweatshop assistant at night. The book shows the struggle between a mother who wants the best for her daughter, but who desperately needs her help to keep her job in the sweatshop at night. Author Jean Kwok, an immigrant herself, brings to life the secret struggles of countless immigrants who are caught between the duty to their families, their personal desires to start a new life, and the immense pressures to succeed in America.

The Wholeness Of A Broken Heart

Katie Singer’s debut novel follows 20-year old Hannah who is incredibly close with her mother. But when Hannah leaves for college, her mother suddenly shuts her out, not even returning her letters of phone calls. Wanting answers, Hannah turns to old photographs and family legends for answers. The story is narrated through four generations of Jewish women who show her that the fate of her grandparents and those left behind in the old country have an impact on her life today. She slowly learns her mother’s heartbreaking story and tragic experiences of her Jewish immigrant family.

The story is a memoir following Betsy Learner, a rock-and-roll rebel child who has to move home after her mother has surgery. Betsy’s mom is more of the don’t-ask-don’t-tell type, and safe to say, they aren’t thick as thieves. Upon arriving home, Betsy joins her mother’s Monday Bridge Club where she is able to understand years of misunderstanding and family tragedy. Unexpectedly for them both, Bridge becomes the means through which mother and daughter can regain a hard fought, but never too late bond. Through its deeply moving and funny prose, this is a book you won’t want to miss!

This is Angelou’s 7th and final book in a series of autobiographies where she writes about her complicated early relationship with her mom. Over time the two come to love and respect one another in her later adult life. I think this quote from the novel really captures a beautiful moment that Angelou has and speaks to why so many moms are our heroes “I really saw clearly, and for the first time, why a mother is really important. Not just because she feeds and also loves and cuddles […]. She stands between the unknown and the known.”

This shortlistf books is guaranteed to have at least one book that both you and mom can read and cherish together. Pick one (or five) up today and show mom just how much you care! Happy reading!