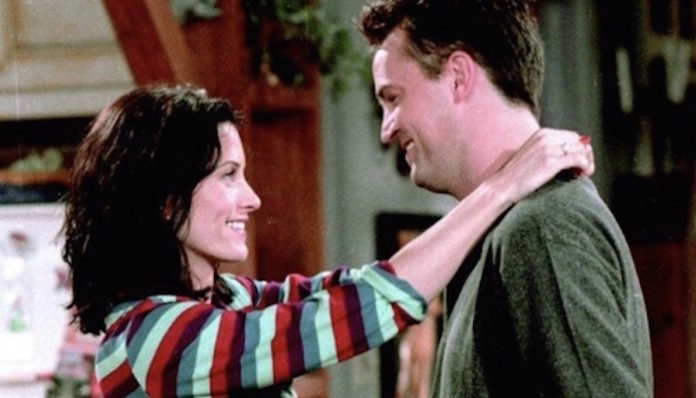 Most Friends fanatics would probably say that Ross and Rachel had the best relationship on the show. From friends to dating, to friends, to parents, and eventually ending up together, we saw it all. Through it, they always managed to love and care for each other. So clearly, their relationship is one to remember. But we can’t forget about the ultimate friend’s couple. I personally believe Monica and Chandler’s relationship defeats all other fictional relationships for several reasons. Here are a couple of the reasons why:

They met at Thanksgiving when Ross and Chandler were in college and Monica was still fat. Chandler called her fat. The next Thanksgiving Monica was thin, but accidentally cut Chandler’s toe off. The beginning was kind of awkward, just as we would expect in any normal relationship.

I mean, Chandler peed on Monica when she was stung by a jellyfish. And this is right after she told him she would never date him.

Chandler’s constant jokes and Monica’s constant cleaning. They had flaws, but they loved each other anyway.

This was quite possibly one of the greatest scenes in Friends history.

Even in the beginning, they cared about each other. Through Monica with Richard and Chandler with Janice, they supported each other. They were always there for each other no matter what. And even though Monica said she would never date Chandler, we knew they would end up together anyway.

Dorky love is the best love, and the Bings prove that. They showed us that relationships don’t have to be difficult and with the right amount of silliness and laughter love is possible.

Their relationship surprised us all in London. No one really expected the two to end up together especially considering their rocky beginning. But they risked it all, and proved once again, that anything is possible.

Monica had always dreamed of having children and when they found out they couldn’t they were devastated. But in the end, they kept trying. Chandler’s speech to Erica was absolutely beautiful and it showed just how badly they wanted this. And in the end, they ended up with two beautiful babies, a boy, and a girl. There is not a more perfect ending.

Monica and Chandler may not have had the closest friendship on the show, but they always stuck by each other’s side. No matter what they were always there to support each other. From their first night together in London, to their beautiful wedding, to the birth of their children they loved each other the same. I can’t think of a more perfect T.V. couple.

Featured Image via screengrab from Friends.

Just So You Know, It’s OK To Feel Broken Sometimes