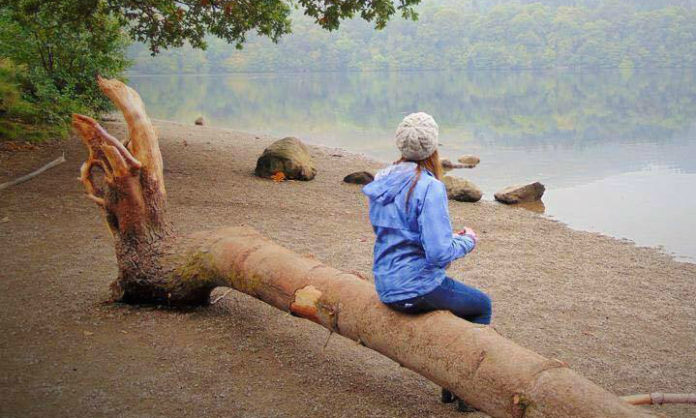 It’s been just slightly over two years since I returned home from a semester abroad. In those two years leading up until now, I have been faced with some of the hardest and most hopeless times in my life, but I wouldn’t change it for anything. The stuff that I’ve dealt with, I wouldn’t wish it upon anyone. The demons I battle every day just to get out of bed isn’t something anyone should take lightly, but they’ve made me who I am today.

And how did this all start? With a semester abroad.

Going abroad, I thought I knew what to expect. We were only going to Scotland, so it wasn’t like the cultures were complete worlds apart. We had orientations months before departure, where we were taught how to expect the “culture shock” that we would inevitably experience, the homesickness we were sure to encounter, and the difficulty of adjusting to a new life in a new country in a completely different time zone surrounded by people who were initially complete strangers.

But what I found the most surprising is that I didn’t experience any of this at all. I never felt like an outsider in this country. I rarely, if ever, felt homesick. After that first night in Scotland, it took all of one day to be adjusted to the new time zone. The semester went smoothly and I hardly had any problems, save a few with my boyfriend back home.

As the semester wound down, our program director attempted to prepare us for something that no amount of orientations could prepare me for. She gathered us in the dining hall one night. She told us to look around and take in everything we could see right in front of us as it was happening. She asked us to remember everything we learned about the world, each other, and ourselves that semester. She passed out paper and pens and told us to write down every happy memory from that semester that we could think of, along with everything we were proud of ourselves for. On the back of that, she advised us to make a list of everything we were going to miss and what we were excited to go back to.

The paper was stained from where tears had hit the paper but one thing was glaringly obvious: my list of things that I was excited to go back to was the shortest one on the paper. Maybe my reluctance to go home should have been an indication, but coming home was not going to be easy. The fact of the matter was that I had changed and I had no idea what I was going to do about it.

Upon my arrival home, I spent most days alone in my room, crying. I broke things off with my boyfriend. I didn’t want to talk to anyone about my trip because I didn’t think they’d understand. I made no effort to get back on a schedule, going to bed every night at 6pm and waking up every morning at 4am. I knew who I had become but had no idea where I was to fit in in my “new” environment. I went from living in a place where I was constantly surrounded by people and always had something to do, and now it was hard to be alone and constantly had to be doing something to keep myself busy.

This phenomenon is known as reverse culture shock, and not many people know about it. It occurs upon re-entry into your home country after a long period away and you haven’t experienced your home culture for a while. It was this that flung me head first into a months-long identity crisis that took even longer to clean up. I spent every day struggling to find where I belonged when I only felt empty inside. I had learned so much about myself and the world yet I didn’t know how to apply it. I had lost all direction in my life.

Struggling with that had, in turn, developed into depression and anxiety, and I spent the better part of the next few months waiting for something to happen – anything at all that could make me feel something.

Two years later and I still struggle with issues related to depression and anxiety. Because of that, I’ve begun to find my purpose and discover what it is in life that is important to me. I don’t want you to read this and become dissuaded in your choice to study abroad. To this day, it is the best decision I have ever made for myself and it has been worth every single minute of struggling and fighting a battle it sometimes seems I won’t ever win. It gave me a love of adventure, a desire to travel, and lifelong friends that I don’t think I could live without.

However, the point of this piece is to be prepared. Do what you can to prepare yourself for that reverse culture shock. Educate yourself about the symptoms of it, as well as the symptoms of anxiety and depression and get help as soon as you can. Talk to someone. Don’t just assume that they won’t understand how you’re feeling. Reach out to your friends who may be experiencing it. Seeing the world is perhaps the greatest gift you could give yourself and it will change you – but I promise that it’s for the good.

Here’s a bit of shameless promotion:

Experience Scotland is a semester-long program located in Dalkeith, nestled outside of Edinburgh. Students live and learn with their peers and teachers in a hundreds-of-years-old palace. The program is open to any students in the US and costs the same as a semester living on campus at UW-River Falls. Click the link to learn more.