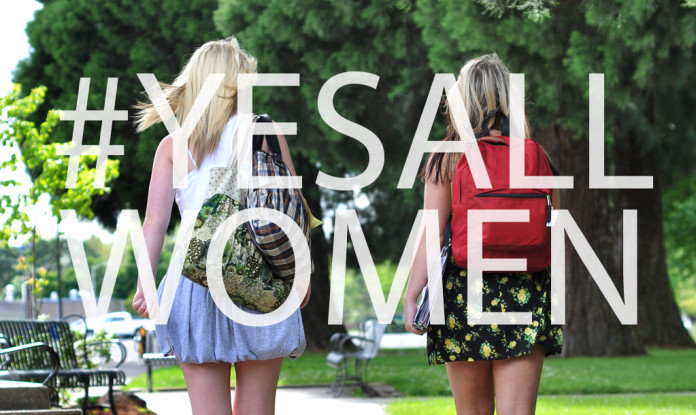 The #YesAllWomen movement recently swept Twitter and the Internet in general, so it seems relevant to talk about the sexism we women face every day. I have never been assaulted, raped, or molested, but the #YesAllWomen campaign has drawn my attention to the little things that happen on a daily basis that I don’t even think about. Though this movement started in response to Elliot Rodger’s shootings in Isla Vista, it has been a long time coming. With sexual assault on college campuses finally being discussed on an institutional and governmental level, the #YesAllWomen movement is finally giving a voice to the women who don’t have stories big enough to make it to the news, yet deal with this issue every day nonetheless.

There have been an abundance of articles on this movement that illustrate the importance of it much better than I ever could, so that is not what I am going to do. People are finally coming out and accepting that feminism doesn’t mean hating men, it means understanding that women are also people.

Because so many poignant articles have already been written, I am going to write some #YesAllWomen tweets that are based on my own life. If you check out my Twitter @SometimesTiaras, you will see some of these posted.

#YesAllWomen because nobody is going to give my brother a rape whistle before he goes to college.

#YesAllWomen because my friend was sexually assaulted in my bed and our friend said “He just doesn’t know where the line is.” NO is the line.

Someone once told me he “deserved” to date someone because he’d been her friend for so long. #YesAllWomen

#YesAllWomen because every time I watch Law&Order: SVU I worry that I fit the profile of so many of those victims.

#YesAllWomen deserve to be able to walk alone in the dark like men do.

#YesAllWomen can be bought drinks without “owing” anyone anything.

Though the #YesAllWomen movement is about a month out, it is still extraordinarily important. We all need to recognize the everyday sexism that women face, be aware of it when it happens, and fight against it when we can. Women are strong, powerful people and we deserve to be treated as human beings.

Some of the best articles I’ve found online:

More info on the Santa Barbara shootings and the start of the #YesAllWomen movement.

Thought Catalog’s “#YesAllWomen Tweets that Everyone Needs to See.”

The New Yorker’s “The Power of #YesAllWomen” article.