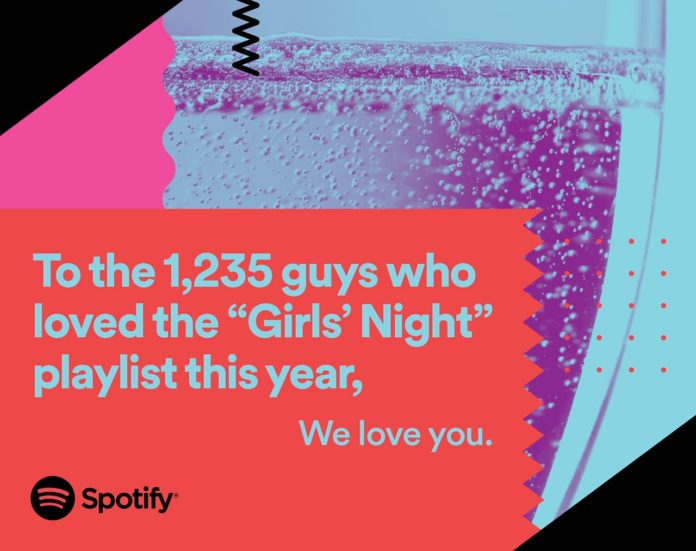 Well … it looks like Spotify really does look at who listens to what and records it all. The company launched its newest ad campaign this past Monday, and let’s just say that it’s an interesting tactic.

Instead of a generic “use our streaming app; we’re affordable” line, the company playfully called out its listeners’ habits. Spotify recorded information from listeners’ location, group, streaming behaviour, and individual date resulting in a colorful and interesting ad campaign.

But seriously, is this the secret to scoring Hamilton tickets? Did JBiebs succeed in helping you be forgiven? I need to know!

The creative team at Spotify took a risk and shook things up with these ads and it looks like it’s going to pay off. It’s a unique tactic and Spotify needs to throw the team who thought of this idea a party because they’re geniuses.

Who says you can’t listen to Mariah Carey belt out “All I Want For Christmas Is YOUUU” year round?

I have so many questions too; first one being, why is your playlist name so long?

Spotify keeps it real and acknowledges just how weird 2016 has been, and we’re thankful. The clever tactic highlights the cutest quirks of its listeners, and it’s not only the United States listeners that are being treated to knowing this random data. Spotify also launched the campaign in the United Kingdom, France, and Germany!

Keep Holding On Britain (just tune the world out and listen to your Spotify playlist).

I see you France, listening to the Weeknd like it’s always the weekend!

Drinking and Spotify-ing is always allowed.

Be on the lookout for Spotify ads to pop up in your city as the company will be rolling more user catered ads in Argentina, Australia, Brazil, Canada, Denmark, Indonesia, Mexico, New Zealand, the Philippines and Sweden over the next few weeks. One thing for sure is that Spotify will definitely have people talking, and have me questioning what I listen to on my playlists.