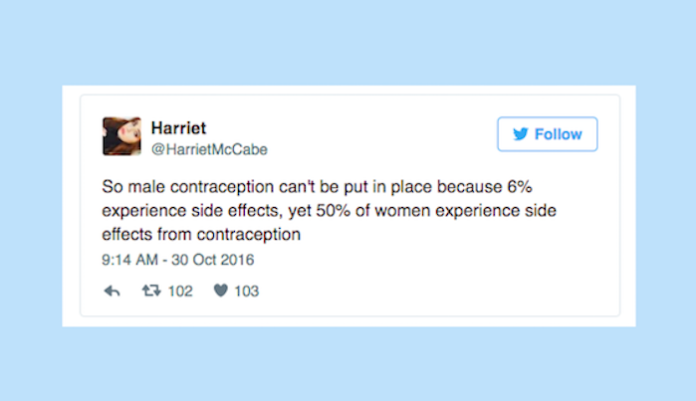 Birth control, of all kinds, is widely practiced these days. Whether it is the pill, an IUD, wearing condoms, or simply making sure the guy pulls out quick enough, the younger generations tend to be pretty careful when it comes to the sexy time. But more often than not, it’s the women taking the measures to prevent pregnancy.

Cue testing for birth control that men can take! 320 men began a medical test where they received shots of progestin and synthetic testosterone.

96% of women that had sex with those men didn’t get pregnant.

Not quite. The test was ended early after some men complained of mood swings, depression, acne, and muscle pains. That sounds so familiar.

Maybe because it’s my life once a month.

Guys, women have these reactions too! In a different study of women who take birth control, doctors found that those taking the pill are 23% more likely to have anti-depressants prescribed.

Of all women studied, not only are they more likely to take anti-depressants, but 30% of them do.

Headaches, sore muscles and breasts, break outs, fits of rage and tears, and cramps so painful I have to get into the fetal position happen once a month for me. But when 3% of 320 men have similar reactions, it’s all over.

Of that small percentage of men that experienced these oh-so-tragic side effects, there were 8 men whose sperm count didn’t come back up to normal levels, 5 did a little later, and 1 man may have become infertile. Get this; that happens to women too. Contraception plays with your hormone levels (duh) and one of the major risks we take when messing around with our body is that one day it won’t do what it was made to do. In this case, that is produce a baby. The longer a female is on birth control, the lower her chances of getting pregnant are once she is no longer taking it. It is estimated that any longer than 8 years, is very detrimental to those already lowered chances.

I get that it’s scary to run these risks and it’s annoying to feel side effects. But men are being a bit dramatic, if you ask me. They don’t want to be dad’s but they don’t seem to want to take action for that. So why should I?

Why Spring Is The Mental Break You Need