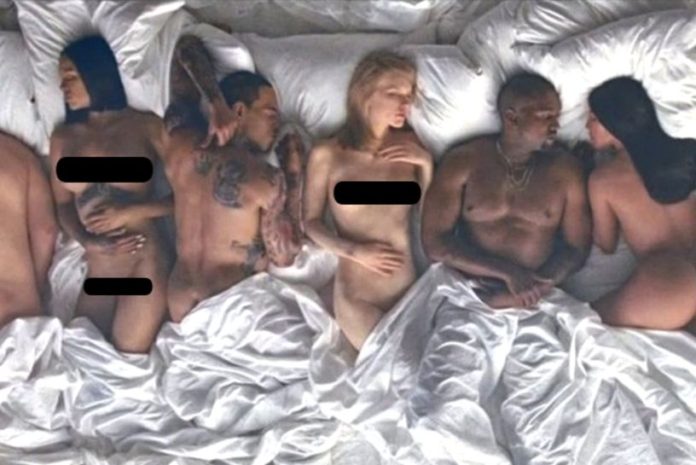 Earlier this week, Kanye West debuted his newest music video for the song Famous. If this song title sounds familiar to you, that would be because it made waves with the line “I feel like me and Taylor might still have sex. Why? I made that bitch famous.” Unsurprisingly, a feud between Kim Kardashian West and Taylor Swift broke out immediately after the release on whether or not Taylor gave permission to Kanye about the lyric.

Well now this song is back in the news after featuring Taylor Swift alongside Rihanna, George W. Bush, Donald Trump, Bill Cosby, Anna Wintour, Chris Brown, Ray J, Amber Rose, Caitlyn Jenner, Kim Kardashian, and Kanye himself all completely naked as wax models laying in bed together. This has created an outrage from almost everyone on the internet.

Lena Dunham – who wasn’t even in the video – stated that the video was “one of the more disturbing ‘artistic’ efforts in recent memory.”  Read her full on Facebook rant about Kanye below:

Chris Brown took to his insta to share the pic and say “Why I gotta have the plumber’s butt/crack showing wax figure?”

Ray J has come out saying that he is just trying to remain positive. He also stated that “my fiancée tripping. It’s all bad in my world, and that ain’t cool.”

Taylor Swift felt completely betrayed and absolutely horrified by the entire thing, which is understandable because she works extremely hard to keep a squeaky clean image. Kanye and Taylor have already been in a feud regarding the “I made that bitch famous” shoutout in the song and the video just added major fuel to that fire.

This all comes after Kanye stated he wanted “to raise the respect level for celebrities so that my daughter can live a more normal life.” So then, why did Kanye feature 9 minutes of several celebrities completely naked without their permission? Are celebrities no longer required to have consent?

The celebrities involved should not be shamed or mocked for the video. Just like any average person, they should be entitled to consent. If any non-celebrities were to have this happen to them it would be a complete outrage in the media. While being famous, there is some expectation of lack of privacy, it seemed unlikely that a fellow celebrity would be the one to exploit them. This was not just another paparazzi scandal that people can blow off. I foresee quite a few lawsuits in the future for Kanye. However, Kanye already took to Twitter  expressing that he is waiting to be sued.

Kanye has been known for taking things way too far since he first interrupted Taylor Swift at the 2009 MTV Music Awards. Not only did he interrupt her speech for best music video of the year, he continued to say that Beyoncé had one of the best music videos of all time. Lets also not forget the time where he stated that he was $53 million dollars in debt.

He partially explained his vision for the Famous video stating that “it’s a comment on fame.” He also commented “It’s not in support or anti-any of [the people in the video].” Everything is completely up for interpretation, but it could be making a solid point on the lack of privacy celebrities have. Not only did he exploit more than one celebrity, but his ego is too big to see that he did anything wrong. Stating that “it’s a comment on fame” just shows that he believes he did right by his actions, failing to neglect anybody else’s opinion on the situation.

Exploiting fellow celebrities just proves he is no better than the paparazzi chasing them. We all know that this is just a large publicity stunt that worked. Knowing that something this big would put him down in history, even if it is in a negative notation is what Kanye is all about. Everyone in the media is eating this up, and his name is thrown out there in such a large manner it will be in the news for weeks if not months with all the lawsuits and battles he will be receiving. He will be famous for his song Famous and all the trouble it caused. If that wasn’t a way to make a large amount of sales (from the song and the music video, which is only available on Tidal which has a subscription fee) then I don’t know what is.