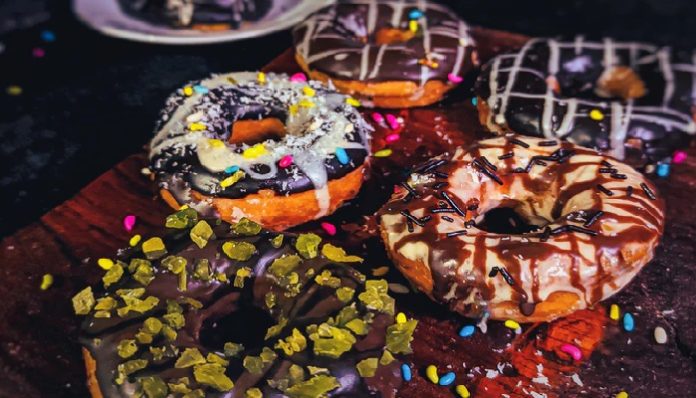 We all know the saying, “a doughnut a day keeps the sadness away…” or something like that. We’ve all had at least one morning where that healthy breakfast isn’t as appealing as it sounded in your mind before you went to sleep the night before.

Doughnuts, of course! From your local bakery to Dunkin Donuts, this sugary goodness has always been deemed the best “cheat treat” of any morning.

If you’re up for a little road trip alongside your yummy breakfast, this list of best doughnuts around the nation is just for you:

1. Blue Star Donuts
This quiet little bakery nestled in Portland, Oregon, opened its storefront just two years ago, but has quickly established itself as a sugary powerhouse with its flavorful selection of treats. Its shelves are lined with drool worthy donuts such as chocolate ganache, champagne peach, old-fashioned cake, and a crème brûlée that will have you throwing away every diet book that tells you to stay away from carbs and refined sugars. According to reviews, if there was a Blue Star on every corner one day, the world would be a better place, and one that’s 10x more enjoyable before noon.

2. The Donut Stop
Located in St. Louis, Missouri, The Donut Stop has been whipping up Pinterest-worthy doughnuts since 1953, giving locals and tourists alike more than 100 flavors to choose from. Say hello to cherry-glazed cake doughnuts, chocolate long john, and cinnamon globs and goodbye to your egg white omelette.

3. Glazed and Confuzed
Alright, I know what you’re thinking and yes, this one is in Colorado. The Denver donut shop has made it’s name alongside the pretty pastries and muffin varieties found in Grandma’s bakery with its take on the Girl Scout cookie caramel de lite with a caramel glaze, toasted coconut, and chocolate drizzle (because really, donuts are better than cookies, right?). It also offers a cheekily-named cream cheese cake donut with a guava glaze called “Guava D’s Nutz.” They opened their first storefront in 2014 and gave customers more variety, which is just more sugary love to choose from.

4. Uncle Dood’s
Who knew the Garden State could be home to such a sweet treat?! Uncle Dood’s Donuts, located in Tom’s River, New Jersey, rotates a selection of made-to-order doughnuts every month that include a cinna-doodle donut with caramel drizzle, a peanut butter and jelly donut, and their famous bed rockin’ donut slathered with fruity pebbles. Call ahead to place an order because these guys sell out quick!

5. Vortex Doughnuts
Alright, maybe I’m a little biased on this one since it’s a mere 15 minute drive from me, but Vortex Doughnuts, home to every vegan-made-from-scratch-locally founded doughnut creation you could ever imagine, is at the top of the “must-try” list of places in Asheville, North Carolina, and has received the Big Tasty Award for doughnuts. With flavours like salted caramel bacon and strawberry shortcake, I don’t think you’ll be able to avoid the sugar coma.

And there you have it: the top five doughnut shops across the country to satisfy that sweet tooth of yours. Now grab your wallet and your appetite and hop in. We’re about to chow down.

5 Festivals & Carnivals That Should Be On Your Bucket List