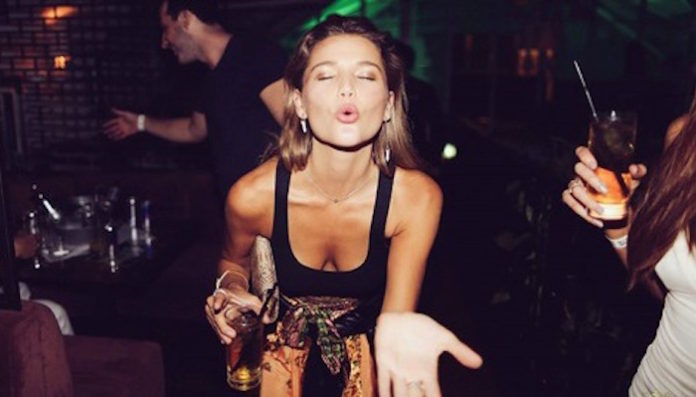 Have you ever given out your number at the club and immediately regretted it the next morning? Then for a few days you just have to hard-core screen your calls as you wait for whomever keeps trying gets over you. It’s an awkward and pathetic bi-weekly ritual for the single folk. The solution is simple. Lie. If you’re feeling the attention but know it isn’t something you’re looking into moving forward with when sober, lie about your name.

Ashley is that part of us that wants to escape for an adventure. Ashley lives for the weekend. We all want to have a romantic or hilarious story to share on Monday but not everyone is the best judge of character. This is where Ashley comes in! She is you but with a fake name and a more outgoing personality; think sweet but not so innocent. When you say you’re only going to get one drink but suddenly the bartender is handing you a full glass before the one is your hand is finished, that is when Ashley takes over. She stays out and lets her wild side out too. Ashley is the girl who can get away with anything; she is daring, adventurous, and totally a girl worth meeting.

Lori is everyone’s alter ego! You know those night you pregame too hard and show up as the life of the party? That’s Lori; that is what your friends call you once those shots of tequila kick in. You watch Lori start to take over like an out-of-body experience. Then you feel it when your switch flips and the sober you is gone for the night. We all have that rambunctious, throw the cares to the wind, run-away person inside of us. Lori is a whirlwind and when she twirls, you twirl too or you’re left in the dust! She is the one you like to blame for all of your bad decisions the night before.

Carrie is who you hope to be one day. Inspired by the iconic role of SJP in Sex and The City, Carrie likes to twist her story a bit. She is the epitome of your goals and aspirations – she is borderline perfect. Maybe you haven’t totally grown into the role you created for yourself but the strangers you meet out don’t know that! It’s not lying if you’re only leaving out the details. You want to impress those people when you’re out so why not make yourself sound a bit more enticing. Carrie does work in fashion; maybe it’s a blog or maybe it’s a designer. Who knows and who cares! If these people you meet don’t know your real name or your real job, can they ever find you again? No.

There are two sides you; don’t deny it. Responsible you is there at work, offering to pick up coffee, replying to emails at a reasonable rate, and taking your vitamins each morning. The funky fresh version of you will snort when she laughs, take her shots without chasers, and wink at that cutie on the opposite end of the bar. Telling that random charmer about funky fresh you is not totally a lie; you’re just highlighting different characteristics of yourself while labeling it with a new name. Letting that funky side of you out for a night is refreshing and can be a great adventure! We all want to do it so why not do it with a spin.

Why Do Guys Assume Every Single Girl Wants A Relationship?

15 Times You Realized You Are Basically Phoebe Buffay