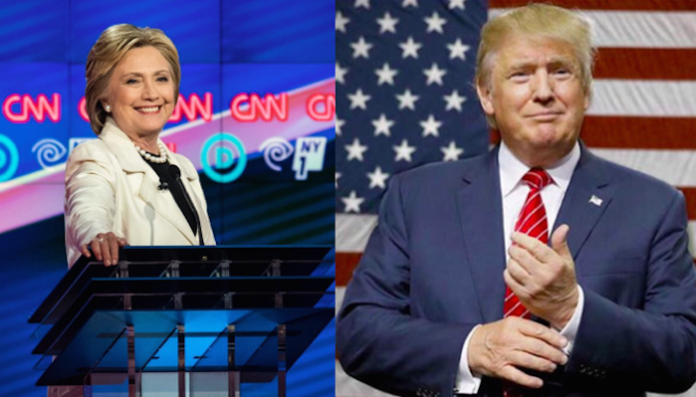 The presidential candidates are all over the place right now, going from state to state in the run up to various primaries. As a Brit, the entire political process here is intriguing and baffling to me. Campaigning for over a year, rallies all across the country; it’s exhausting trying to keep up! On Thursday, April 21st, I had the opportunity to go to both a Hillary Clinton speaking event (sadly no Hillz herself, but Bill instead) and a Donald Trump rally in Harrisburg, PA before the Pennsylvania primary on Tuesday, April 26th. Here are just a few things I learned on my day following the campaign trail:

1. More Young People Are Getting Involved

The “youth of today” (ugh, I sound like my grandmother) are well-publicized as party-animals, disengaged, and uninterested in anything more than music festivals, alcohol, and Netflix. That couldn’t be further from the truth. I was pleasantly surprised by the number of millennials at both rallies, although the vast majority at Trump’s seemed to have been dragged there by their over-excited parents.

Clinton’s was different though. While waiting nearly an hour for President Bill Clinton to take to the stage, I struck up conversation with some local college students. Not only was the group incredibly diverse (a noticeable difference at Trump’s event later that day), but they were passionate about the changes that they felt Hillary would make as president and were optimistic about their futures. Higher education was a key pitch point for the Clinton campaign and as I glanced over to the group during that part of the discussion, I saw them all nodding their heads in agreement and lapping up every word.

2. Politics Can Get Scary

I like to think of myself as a fairly brave person. I’ll walk home on my own in the dark, and I’ll catch the subway alone at ungodly hours of the night. But I’ve never felt more fearful than when I was standing in line at Trump’s rally. As protesters started to arrive, the back and forth yelling eventually led to several confrontations, which didn’t stop once we all got inside the expo center. A number of protesters were forcibly removed by police while the Trump supporters chanted “build that wall” over and over.

Speaking of the now infamous wall, referencing the past seems to be one of Trump’s key tactics. Somehow I don’t think “China built a great wall, why can’t we?” is a great philosophy to base your entire immigration policy on.

We all want to make the country we live in a better place but the unpredictable nature of both Trump and his supporters is, quite frankly, terrifying.

3. Entrepreneurs Are The Future – That Includes Us!

Clinton talked for a long time about small businesses and jobs. After all, most of us have likely faced periods of unemployment, sent out countless resumes, and waited for the phone to ring with the promise of an interview on the other end. But what was really great was hearing about potential options for young people to get loans to start a business if Hillary becomes president, even if you’re saddled with a mountain of student debt.

Millennials are being termed “the generation of entrepreneurs” and it’s easy to see why. A recent study found that almost 2/3rds of people under 30 aspire to start their own business rather than climb the corporate ladder. We are the maker generation. Whether that be designing the next big thing in tech, making furniture that will last longer than that cheap Target end table, feeding your community from a food truck or bakery, or teaching local kids how to read at your bookshop (think You’ve Got Mail), we are the generation that aspires to inspire and do more with our lives than the “normal” 9-to-5.

4. We Shouldn’t Give Up On Humanity Just Yet

It can be really easy to feel disheartened with the way life is right now. Terrorism is a real threat, the refugee crisis is now worse than during World War II, more and more 20-somethings are graduating college with more debt than they can ever pay off, and competing for jobs that are few and far between. But if these two events have taught me anything, it’s that we have to stay hopeful. Trump’s rally may have been scary and I encountered a large number of people whose views I vehemently disagree with on so many levels, but Hillary’s gave me hope.

People apologized when accidentally standing on toes in the packed conference space, Facebook contact information and hugs were exchanged between strangers who struck up new friendships, and I even saw a woman offer to hold someone’s baby so she could eat her sandwich without trying to hold a wriggly human at the same time.

Politics can often be a divisive subject between both friends and strangers, but it doesn’t have to be. It can be confusing and annoying at times but the future belongs to all of us, so it’s worth doing a bit of research before heading off to vote this fall.