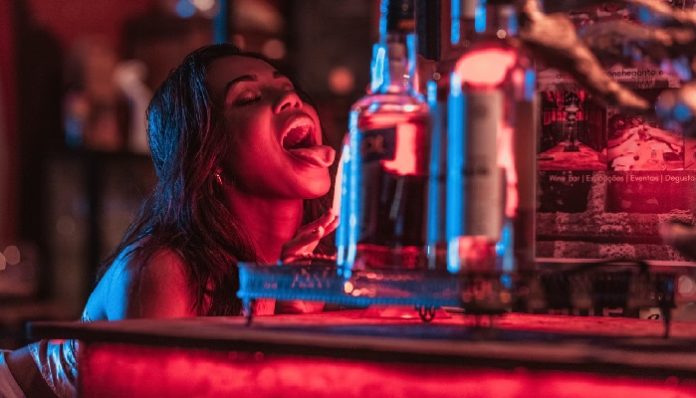 Blacking out could give you the best or worst night of your entire life. Either way, you probably don’t remember which it is. It’s always hilarious listening to the stupid, but probably embarrassing things you did the night before. Here are 15 people on the funniest thing they’ve ever done blacked out, according to their friends.

2. “I blacked out while working behind the bar at a wedding (drinking boxed wine out of a mountain dew can) and then went and hung out with a couple of co-workers who I smoked  with. They dropped me back off at my place where I proceeded to drop my pants, squat down and take a shit on our front porch. I then walked through the living room with my pants around my ankles, junk hanging out. I wiped up the bathroom, went to bed and woke up the next morning to my roommate asking me if I could clean my shit off the porch…I remember nothing.” – Rodman, 25

3. “I drank Jack Daniels at a concert and ended up at this random mans mini van puking while sitting down by the sliding door. When my friends came and got me we went into the concert and I threw up water on a girls feet in line for the bathroom.” – Kelly, 24

4. “Got blackout drunk, ripped my shirt in half Hulk Hogan style and spun in circles while urinating all over one of my best friend’s bathroom.” – Conley, 24

5. “I was blacked out after a banquet and it was my teammates birthday. I took his cake, stood outside the bar and was handing out pieces of cake with my hand.” – Alex, 26

6. “Worked a hosting shift at work the morning we reopened from our remodel. Got off around 3, sat down with some regulars and had 7 glasses of wine. By the time that was said and done, I had successfully picked up a week’s worth of shifts that I couldn’t work, and I passed out in the bushes outside the employee entrance/exit to the building and apparently yelled goodbye to everyone on their way out before someone finally took my keys. Lesson learned: don’t get shit faced after work, at work.” – Erin, 22

7. “Got completely naked in the parking lot in the middle of winter, and when my neighbor’s parents came out the front door, I made sure they noticed me.” – Ryan, 25

8. “Carried a 200 pound stump to my front yard then passed out drunk and when my friend came in I was drooling on myself yelling, ‘I love the stump.’” – Mackenzie, 21

9. “I was walking down the main street in my town while peeing and talking on the phone. I broke into my old house to sleep with a woman…turns out she was married. Not my proudest moment.” – John, 27

10. “I got way too drunk off beer and vodka, I went outside to puke off my porch in a lawn chair, but ended up just puking on the porch. Apparently, I walked back into the house after about 30 minutes and said goodnight to my friends like I had just got home. Then started throwing up again in my room and had to be showered by my friend.” – Becky, 22

12. “I did laundry, then fell asleep cuddling a bottle of Jack Daniels. Another time I was cuddling a bag of rolls.” – Jason, 21

13. “Not a drinking blackout, but a hypnosis show at school. I was in the audience and the host asked for some people in the audience to try it and so apparently I was really angry at some old woman, I barked like a terrier, and I cried because he made me think the show hadn’t started so I wanted my money back and it was very dramatic.” – Cassandra, 21

14. “On New Year’s Eve, all of my friends were busy so we decided to get together the night before. So on New Year’s Eve Eve, we all went to my friend’s house and pooled money for drinks. I also knew my physics marks were coming back roughly around that night and I hadn’t done too hot on the exam. The morning after, they told me I had slung around my friend’s arm and addressed people using Lionel Richie’s ‘Hello’ for the rest of the night.” – Cam, 22

15. “Freshman year after exams I went to a frat house with my friend Tyler. I woke up the next morning (still drunk) in Tyler’s room on a mattress without sheets, and he was asleep on the other bed. Last week I finally was told I threw up all over Tyler in his bed that night and he had to fold them up and bring them home to wash because he didn’t have time before his parents picked him up.” – Elizabeth, 20

Consuming too much alcohol from time to time can make you do things you never would do if you were consciously aware, but for the most part it’s both funny and embarrassing. Your 20s are the time to do stupid things and have them be not only accepted, but make hilarious stories after the fact. Be a good person and look after your friends when they’ve drank like a fish because the stories you’ll get out of it are priceless.

The Harsh Reality Of Falling For Someone Who Will Never Love...

Kindness Changed My View Of The World, Here’s How