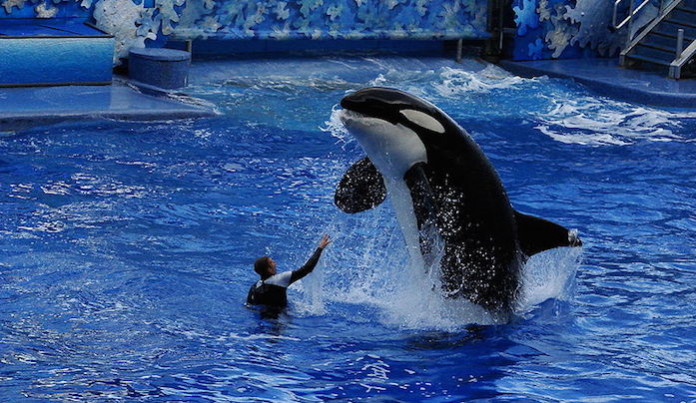 This morning I woke up to a text from my younger sister Ali:

“No more captivity of whales in SeaWorld wooooo!!!! They’re donating like 5 million dollars into charities to protect the whales.”

I immediately jumped out of bed and grabbed my laptop to see this was true.

And she was right, SeaWorld made the announcement on their website this morning that the remaining twenty-four orcas at the infamous amusement parks around the country will be their last.

This news filled me with such happiness and nothing can ruin that right now. My sister, an advocate of marine life safety, recently wrote her junior research paper on the controversy over the mistreatment of these beautiful animals, and has been updating me ever since.

You may not have the same reaction we did to this, but trust me, it’s amazing news. Just as a little bit of background on the topic, the mistreatment of orcas at these parks has been ongoing for the past few decades. They are not meant to be held captive in the first place, so in being confined to these small tanks, they begin to misbehave.

The whale attractions held at the parks for large audiences are spectacular and exciting, but many people don’t know what goes on behind the scenes. When the whales “misbehave”, they get punished. Two examples of punishment is that sometimes they starve the whales, and occasionally they take beatings.

This announcement by the park is LONG overdue and it gives me immense relief to know that they’re taking steps to better the lives of their remaining whales. I’ve included this little tidbit from their breaking announcement about their plans regarding the whales’ futures:

“This announcement reaffirms our commitment to not collect marine mammals from the wild. After all, we haven’t collected an orca from the wild in almost 40 years, and the orcas at SeaWorld were either born there or have spent almost their entire lives in human care. These majestic orcas will not be released into the ocean, nor confined to sea cages. They could not survive in oceans to compete for food, be exposed to unfamiliar diseases or to have to deal with environmental concerns – including pollution and other man-made threats. Instead, they will live long and healthy lives under love and care of our dedicated veterinary and other trained specialists where they can inspire this and future generations to be conservationists around the world through natural presentations that are fun, exciting and will educate guests about the plight of orcas in the wild.”

They are going to stop breeding, but they are not going to release the whales. Mostly because if they release them, they’ll die after having been in captivity for so long. Regardless, this is a big step for the company and completely changes its function as a park, as they are well-known for their live orca attractions.

The reason why my sister and I resonate with the news so much is because one whale in particular, Tilikum, an infamous bull orca located in SeaWorld Orlando, Florida. We’ve been following Tilly’s story for awhile now. He has been involved in the deaths of at least three people while he’s been in captivity: Two trainers in 1991 and 1999, and more recently, Orlando trainer Dawn Brancheau in 2010, which SeaWorld dumbed down as the whale’s fault when in fact it was their fault.

You see, when obtaining the permit for the orca, they avoided warnings from Sealand (his previous home) about the potential dangers involved in bringing Tilikum to their park. As a result, these two trainers, along with Brancheau have been killed by him, the largest orca in captivity. A previous announcement from the park on March 8th stated that Tilikum’s health was deteriorating and that it’s possible he has a lung infection caused by a rare and resistant bacteria. His life in captivity has been a horrible one but we love him and can only hope that Tilly’s remaining time (to continue being spent in captivity) will be filled with the happiness he deserves.

These amazing creatures are not meant to be held in captivity, this is clear. It’s upsetting that so many lives have been lost when something could have been done about it. They could have addressed the mistreatment of the whales at the parks including punishments and cleanliness of tanks. My animosity toward the famous water park will never die, but hearing this today has decreased it by a little.

Needless to say, we have finally received the news we’ve been waiting for, and I couldn’t be happier.

To My Friend In A Toxic Relationship, I Hope One Day...

The Sad And Honest Truth About Maintaining Adult Friendships