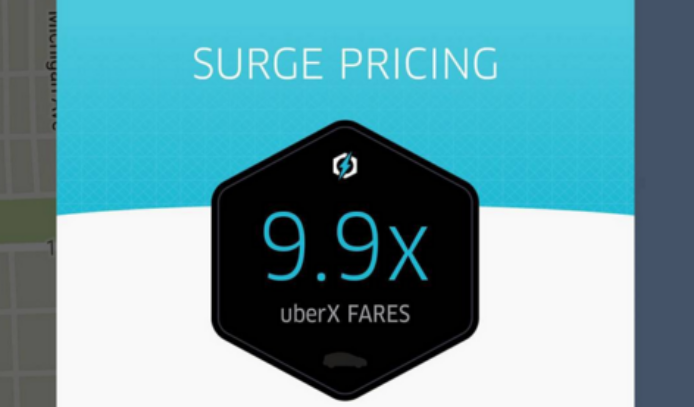 It’s 3:21 a.m. and you’ve had more than enough glasses of champagne – you just want to get home to sleep. It’s New Years and taxis are going by full of people and it will take you over an hour to get home if you take public transportation. You decide to open your Uber app and are shocked at the 9.9x surge price, but drinking and driving is definitely not an option, so you decide to accept the charge. In the morning, you wake up in a hungover stumble wondering what the heck happened last night and you glance at your email to see you were charged over $200 for your Uber. Whose fault is that really?

Maybe Uber is in the wrong. Raising prices on a busy night makes sense. It’s an opportunity to make more money and this is a business. We get it. However, raising the price 9.9X is ethically not sitting straight with many, regardless of whether or not they notified customers. They convinced people into paying outrageous prices for the same value of product as the night before and it’s not the only time they’ve done it (ie. Halloween, July 4th and every other big event/holiday). Uber customers were flipping out yesterday after they soberly realized how much they spent on their ride home the night before.

Aside from the fact that swift price changes are wrong in general, they did this on New Year’s Eve. Perhaps the worst night for drunk driving, and drunk driving is everyone’s problem. Most companies that provide transportation take on some role in doing their part to prevent drunk driving on nights like New Year’s. Many cities even have sponsored free transit options. Uber jacking up their prices on what is quite possibly the most dangerous night to be on the road seems counter-productive.

Uber is supposed to be cheaper than taxis since they don’t have to comply with the same legal regulations and background checks. But that is not the case on nights like New Year’s Eve where Uber’s cheap-motto, sub-par customer service and ride-share persona absolutely sh*t the bed. Many have complained that Uber canceled their rides right before their surge prices began, forcing riders to have to wait and order another Uber AFTER the prices have already gone up. Uber has one of the most loyal customer bases and the company is well aware their riders will pay ridiculous prices for their services. However, it seems extremely messed up and unethical that the company would take such advantage of their riders, especially on a night where the goal should be to avoid drunk driving. Should anyone really be paying $257.51 for a 15 minute ride home? According to Uber, yes.

People are upset with Uber as a company, but maybe from a different perspective, they should be mad at themselves. Uber cannot control how much you drink on NYE and if you know how to work their app while drunk. They make it quite clear when you open your app what the surge price will be and you were told to either accept the surge or to be notified when the surge price drops. Once you accept, you are then told to type out the current surge rate so you are aware what you will be paying. You then still have a chance to look over what the fare estimate will be before ordering your ride. Uber took the initiative to email all their customers on New Year’s Eve warning them about surge rates and when will be the best times to order an Uber. 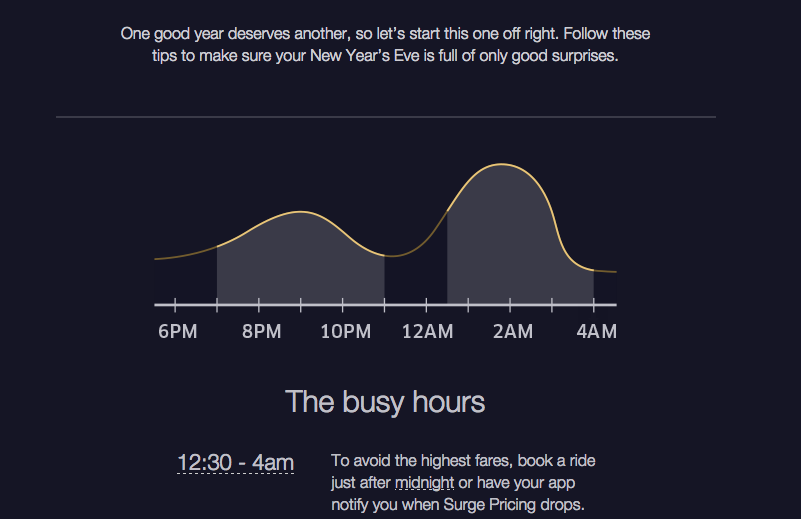 Surge prices happen only when there is a demand for drivers. Uber wants you to get home safe and in order to do that they need drivers on the road. To get drivers on the road, they need to give drivers an incentive to give up their own New Year’s Eve shenanigans. No one seems to be mad that they couldn’t get a taxi, but are upset that they could get an Uber… for an inflated price. Public transportation in many major cities were free to ride, but people chose to get an Uber. People could have waited longer to hail a cab, but they decided to get in an Uber. People could have planned their way to get home before they went out, but they decided to get in an Uber. Maybe after all, this was not Uber encouraging drinking and driving, and maybe they aren’t the bad guys. They were encouraging more sober drivers on the roads to pick your drunk ass up and get you home safe. Not to mention the extra precautions they took like email acknowledgements, and a ride guide full of tips to ensure the public understood the surge. Drink and order your Uber responsibly. Maybe it’s that simple.

Uber has been a hot topic for a while now when it comes to questions of moral and safety concerns. There are many different factors to consider when deciding your position on the subject. No one would argue the fact that it’s nice to have a generally cheaper and more convenient way to get around, but some would say this convenience comes at too high of a price in other areas. With the recent price surges we are forced to ask even more questions. Did Uber take advantage of their customers on New Year’s Eve or are they just doing business per usual? No matter what side of the debate you’re on, Uber is probably here to stay so hopefully we can figure out a solution that best serves everyone’s safety, comfort, and bank accounts.

What’s your stance? Share your opinion in the poll and comments section below.

The Harsh Reality Of Falling For Someone Who Will Never Love...