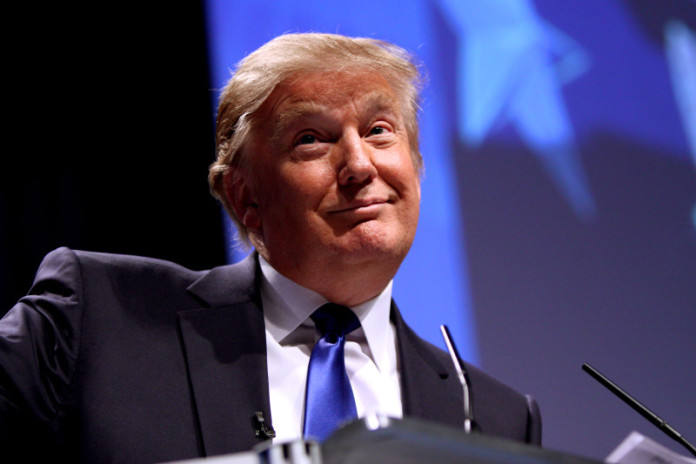 Last week, news anchors grappled with Republican presidential candidate Donald Trump’s statements from his Rolling Stone interview regarding his fellow Republican opponent, Carly Fiorina. Spoiler alert: Trump’s focus in the article was not on Fiorina’s policies or stances on party platforms, but rather, on her looks:

“Look at that face!” he cries. “Would anyone vote for that? Can you imagine that, the face of our next president?!…I mean, she’s a woman, and I’m not s’posedta say bad things, but really, folks, come on. Are we serious?”

I’m not sure what’s more offensive: the fact that Trump questioned Fiorina’s ability to be president based on her physical appearance, or the fact that he mocked critics who warned him that he better change the way he speaks about women. Since he was grilled for referring to Fox News anchor Megyn Kelly as a “bimbo” who had “blood coming out of her eyes, blood coming out of her…wherever” during the Fox News Channel’s debate in July, he has tried to recover by publicly stating that he is not a “bully,” and that he “cherishes women” and that he would be “the best president for women.” I guess he forgot those promises during his Rolling Stone interview.

Trump’s rhetoric is toxic for several reasons, and there’s no sign that the billionaire from The Apprentice will let up with his jabs at the population that represents over half of the country anytime soon. Whether you’ve been a Hillary Clinton supporter since her first campaign in 2008, or Fiorina just caught your attention at the debate in July, it should be exciting and inspiring that there are female voices represented on both sides of the presidential election. Powerful women are visible in every job title and position imaginable, from CEO’s to stay-at-home-moms. Their daughters all across the country have aspirations, too, and those young women are paying attention to what they see and hear on television from people who claim to be in positions of power. Fiorina already responded to Trump’s remarks with a video where she is seen at a campaign event telling her audience, “This is the face of a 61-year-old woman. I am proud of every year and every wrinkle.”

But not every female has the same confidence to bounce back from being told she can’t accomplish a goal just because of the way she looks. My twelve-year-old cousins are twin sisters, and they are entering some of the most vulnerable, tumultuous years of their lives as they navigate adolescence in middle school. If they heard what Trump said about Fiorina, what kind of message would that send to either of them about how they ought to perceive success?

If either wanted to run for class president, would they hesitate and wonder if they “look the part?”

Trump may have missed another crucial fact: we are currently living under a record-high number of simultaneous female world leaders. 22 females have been elected or appointed to their offices, and some of them have governed their countries for as long as a decade. That should be a serious wakeup call to Mr. Trump, who would have to deal with many, if not all, of these leaders, if elected president of the United States.

The problem with Trump is that whatever he says, no matter how harmful it is to any given population in the country he hopes to lead, gets in-depth, lengthy media coverage. So I’d like to change the topic.

It’s high time we held Trump accountable for his policy-oriented promises and looked beyond the surface level fanfare.

I will be watching the next Republican debate hosted by CNN tomorrow night, and I hope Fiorina takes the high road and focuses on proving her credibility rather than feeding into the boxing match-style campaign Trump has encouraged. I hope Trump gets the hint that he needs to start acting like a real leader if he intends to be one, not for his sake, but for girls and women throughout the United States who should never, ever be told they can’t achieve their dreams based on their appearances.

Why Now Is The Perfect Time To Start Your Christmas Shopping