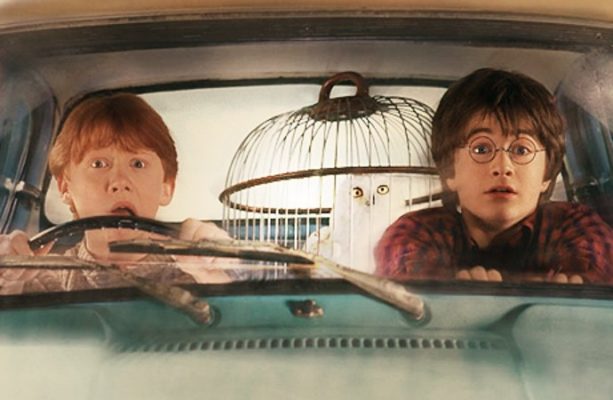 I’m going to make a super bold move here and say if you haven’t read or watched any part of the Harry Potter series (or aren’t at least a little familiar with it), you’ve missed out on a giant part of childhood. I mean, Harry kind of did a lot for our generation—he made it cool for us to be avid readers, gave us role models in the most unlikely of people (Neville Longbottom, anyone?) and taught us so many lessons about good and evil, heroism and friendship.

But as rad as I think Harry Potter is, it’d be a total lie for me to say that I didn’t harbor a little bit of resentment for the guy and the world he lived in, because it was so freaking cool and I, like many of us, was so jealous that I didn’t get to be a part of it. And while as a muggle I was definitely fine with not having to deal with Lord Voldemort, there was still a ton of stuff I was envious of Potter and his pals that simply made life easier.

In the seventh book, Hermione lets us all in on a little wizarding secret: You might not be able to conjure up food out of nothing, but if you have a little bit, you can make more or make it tastier. As someone who actually gets upset when her cheese stick is gone, this food-related magic would be extremely useful.

This little potion Harry won in The Half Blood Prince brought him lots of good luck, and I kind of want in on the party, too. Finals week? Felix felicis. Working up the courage to talk to the cute guy I’ve had my eye on? Felix felicis. Going in for a huge interview? Felix felicis. It solves everything!

Ah, yes, the clock in the Weasley’s living room. With enough hands on it for each member of the family, this clock fills Mrs. Weasley in on where everyone is. Is it totally creepy that I think this would be perfect if I suspected a significant other were up to no good? Yes? Oh well.

The amount of colleges that have Quidditch teams is insanely awesome. Even though we muggles have to play Quidditch on the ground, this wizarding version of soccer with a twist is athletic perfection. No wonder Ron and Harry were so obsessed with it.

Alright, so maybe Fireball is our muggle equivalent, but now that I know my favorite kind of booze has antifreeze in it, I need some of Harry’s drink of choice (even if, like Fireball, it might make us sick…)

So many of us have experienced it—you broke something, and now you can’t play a sport for weeks and weeks… but that wouldn’t be the case with Skelegrow! When Harry lost all of the bones in his arm in Chamber of Secrets, he might have had a really painful night in the infirmary as the bones grew back, but at least he didn’t miss any Quidditch practices.

As we learned in Deathly Hallows, it can be pretty awful to bring someone back from the dead using the resurrection stone, but you can effectively still keep your loved ones around in the afterlife if they’ve got a portrait of themselves, which is way too cool. If I were a wizard, I’d make everyone I know get a portrait done for me so I could chew the fat with them whenever I wanted.

Between the awesome food and the medical marvels that exist in Harry’s world, it’s safe to say that I’m thoroughly green with envy, and I’m not ashamed.