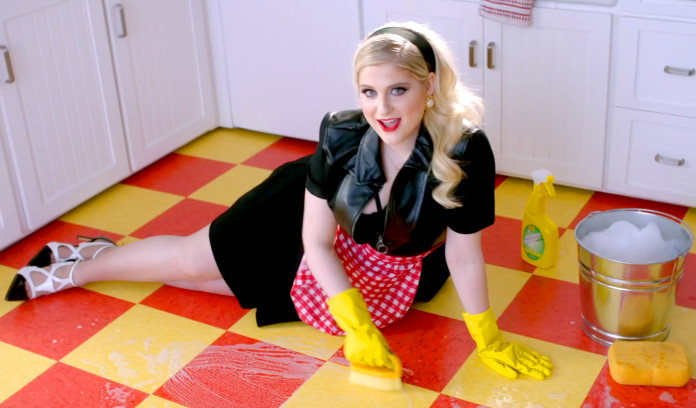 Meghan Trainor was once praised for her hit “All About That Bass” due to the empowering message it broadcasted to young girls across the world – telling them they don’t have to be skinny to be perfect although the lyrics say, “Don’t worry about your size, boys like a little more booty to hold at night.” These words lend themselves to the idea that it is okay to have a larger derrière because that is what boys like; therefore, promoting the beauty ideal established by men, rather than finding your own body acceptance.

Her latest video looks nearly the same and the music is once again upbeat and extremely catchy. That makes it easy to worm itself into young girls’ minds without anyone stopping to teach them what this song actually says.

1. “Take me on a date. I deserve it, babe. And don’t forget the flowers every anniversary”

This lyric doesn’t make me want flowers or a date from a guy so uh, great job, Megan Trainor! This lyric pushes the idea that men must go out of their way to spoil women with nothing in return. It would only be acceptable if maybe Trainor plans on paying for the next date or gets him chocolates for their anniversary like the equals they are.

2. “’Cause if you’ll treat me right, I’ll be the perfect wife. Buying groceries, Buy-buying what you need”

Ah! Here it is, I enjoyed this song for less than 20 seconds. Yes, the perfect wife’s main job is to buy groceries and do all the shopping for her husband. If you are a decent person and treat me correctly as a human being I will strut down the produce aisle like a Victoria’s Secret model with her wings on as any “perfect wife” should.

You did it Megan! You are an inspiration for budding feminists all over. Yes, this lyric actually tears down the idea that women must be great cooks. Trainor even burns a pie in the video to prove the point. However, the rest of the video, she’s having a grand ol’ time baking and cleaning without any trouble or disdain.

4. “You gotta know how to treat me like a lady; even when I’m acting crazy tell me everything’s alright”

Yes, everyone has their crazy moments but if you writing an anthem for women and their thoughts toward their future husband, you’re not really helping women out. Instead, here Trainor is pretty much agreeing that women do act crazy and therefore need a man to settle them down and tell them everything will be okay. It is not like this is a stereotype that women in governmental positions have been fighting against for years or anything…

5. “If you wanna get that special lovin’, tell me I’m beautiful each and every night”

That is right boys, tell us we are pretty and we will have sex with you.

6. “After every fight, just apologize and maybe then I’ll let you try and rock my body right”

This is pretty much saying that when in an argument, the man may not know what he did wrong at all but if he just says an empty sorry, you’ll have sex with him. Trainor also adds that she would obviously never be wrong, so apologizing to her just makes sense. That’s not true for men or women – no one is always right.

Here, Trainor is basically saying that when your husband is not around you will be lonely. As a wife, your husband can be your only friend and you must be completely dependent on him for your emotional stability. Then, Trainor insinuates that women must be selfish in saying “And know we’ll never see your family more than mine,” which is just plain rude. Marry me and you might as well kiss your family good-bye!

8. “I’ll be sleeping on the left side of the bed. Open doors for me and you might get some… kisses”

This lyric absolutely infuriates me! Trainor purposefully pauses a while before saying ‘kisses’ leading the listener to think she is about to say ‘head’. Awesome Megan Trainor! Great message! If a boy opens a door for you, you better drop to your knees and get to work. No. Opening doors for a person is simply polite; it is does not mean a woman owes you anything – it just shows you have manners and don’t want doors to slam in others’ faces.

Aside from the lyrics, the video itself is offensive to both men and women, enforcing strict gender roles as Trainor cooks, cleans and denies a man that actually knows how to cook (and another because he is not strong enough). In the end, Trainor chooses the man who brings her pizza showing that yes – we all must be girly and wear tight skirts with revealing tops but we also have to be one of the guys and be able to down a pizza whenever. Trainor, are you going to degrade women like most of your lines or promote feminism like the working 9-to-5 line? Pick a side.