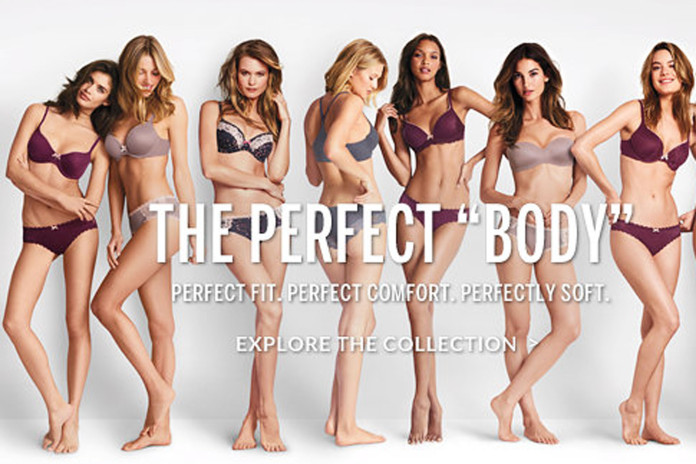 Victoria’s Secret recently became public enemy number one with the controversial “The Perfect Body” campaign. If you haven’t seen the newest print advertisement from the lingerie/clothing store, it’s Victoria’s Secret models standing in a variety of bra and underwear lines with The Perfect “Body” written overtop the models. This print advertisement did not fly with many women across America as it gives women an unrealistic image of the perfect body. The whole goal of the campaign is not to make women hate themselves, it’s to sell bras and underwear, and it is frustrating that we have become so obsessed with making sure we feel “pretty” that a simple ad could turn into a complete fiasco.

Victoria’s Secret employed the oldest advertising trick in the book with this campaign, and it’s truly a basic concept. They’re essentially telling the audience that the unique bra and underwear lines will help women attain their “perfect” body. Never does the campaign state that the women wearing the lingerie lines have perfect bodies, they’re simply saying the perfect body lies in the bras and underwear they’re wearing. Realistically, a bra and underwear won’t transform your body, but Victoria’s Secret ad leads the audience to believe it can give us the “perfect” body we all want.

Most of the cosmetics, clothing, skin products, really anything you own to make yourself look better, are sold using the same method Victoria’s Secret employed in this campaign. All ads hold values they want the viewer to respond to, it’s how products sell. It begins by showing a positive symbol (the “perfect body”, the flawless eyelashes,) then finding a sacrifice (you might not fit into it, it might be expensive) and lastly, the enemy (the body you had before, your previous basic face).

In response to all the uproar, Victoria’s Secret changed the name of the campaign to “A Body for Every Body.” A fine adjustment, but they’re still delivering the same message: this lingerie will make your body look it’s finest. The models are still there, they’re still wearing the same product you’re probably going to end up buying, so did the change of wording really help that much? Are women all of a sudden going to become self-confidant and realize their true beauty?

Instead of being outraged over yet another campaign centered on products “perfecting” a woman’s appearance, maybe we should focus on why advertisements about this subject succeed. Maybe it’s time to stop skinny shaming the Victoria’s Secret models and realize the problems you think you have with this campaign run far deeper than the words and skinny models. Women will continue to buy products to change their appearance; it’s the sad truth of our society. What makes this campaign so much different than the rest?