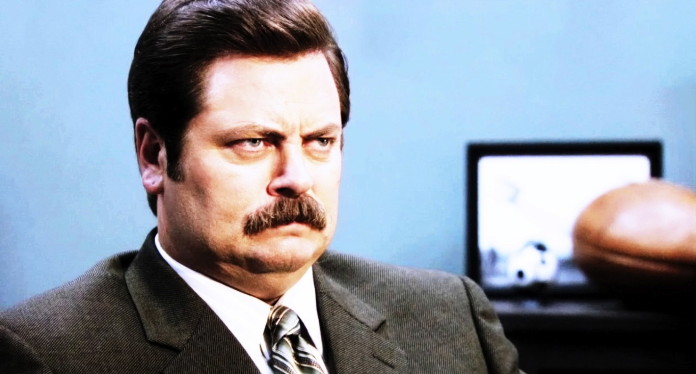 For most of us, Ron Swanson, is totally our spirit animal. While his character might be off Parks and Recreation, his attitude fits in with a certain portion of the population – those of us who like to look at the facts. Most people simply don’t understand our all too serious nature, but appreciate our honesty. Like the great Ron himself, we tend to accidentally crush people’s dreams, shoot down silly ideas, and refuse to settle for anything less than quality. From always wanting to be left alone, to not really caring about anything, the signs are clear that we’re just like Ron Swanson.

As you stand awkwardly in Ulta with your friends, you don’t understand what all the fuss is about. It’s makeup and hair spray, that is literally $20 cheaper at Target. Getting ready to go out is also something that you just don’t understand. Your friends try on a million different outfit variations, with a wide range of responses and excitement, while you just change out of your baggy sweatshirt, and hope for the best. Everyone gets so excited over fall season lattes, puppies, and Ryan Gosling, but the last time you felt that excited, was the first time you rode a roller coaster that went upside down…when you were eight years old. Everything else is relatively unimpressive.

2. You Just Want to be Left Alone.

Social situations are your worst nightmare. Work party? Not going. Fraternity party? Oh, God, no. People are irritating, and honestly, why would you want to be more irritated? You hate small talk because small talk is pointless conversation, and also because you have to talk to someone. The agony. You would greatly prefer to do a solo activity like a warm cup of coffee at the art museum, or taking a walk through a quiet park – or literally anything that gets you away from human interaction.

3. Other People Pretend They Don’t Care – You Really Don’t.

The negative attitude has become trendy recently, but you’d be the first to say that you aren’t really negative at all. You’re realistic and detached. Creating an attachment to an impermanent situation or relationship sounds a lot like wasting your time. You’re not likely to hang out anywhere that precious time is wasted when you could have used that time to improve yourself. The majority of people do a lot of things that waste their time – waiting for the always-late-friend to go to the movies, trying to get everyone in the group to pick a restaurant, figuring out what gym is equidistant to everyone to go together. You genuinely don’t care about any of those things because all of those things you can do by yourself, with zero time wasted trying to include someone else. If someone doesn’t like it, they can just get over it.

You would be the first to note the scientific improbabilities while watching a Disney movie. (For example: “How did they fit all those rooms in Rapunzel’s tower when the first shot of the movie reveals how small it is? Seems unlikely.”) You like movies that follow good, solid logic. People know better than to joke around with you because you always like things straight to the point. You also like things with the correct use of literality, but that’s becoming a harder quality to find nowadays. Nothing is more awkward than when people think you’re joking. No, that outfit really is terrible. You wouldn’t have said it if you didn’t mean it.

What people forget to notice about you is that you like things in their simplest form. You don’t like going out because you appreciate the silence. You genuinely enjoy things that are don’t take much work. If someone does manage to get past your tough exterior, the perfect date would be a picnic in the park or something equally as low key. You’re more than happy to let your date be the center of attention because watching them soar in the spotlight is more than enough for the two of you.

While it is easy to feel alone in the world full of Leslie Knopes, stick to your guns and stay true to yourself. Not everyone is going to understand you, but don’t feel pressured to pretend to be excited about lipstick when you’re simply not. People will grow to love your honesty, simplistic nature, and steadfast loyalty. Don’t feel obligated to surround yourself with people when you’ll never really be feeling it. As Ron himself said, “Friends: one to three is sufficient.”