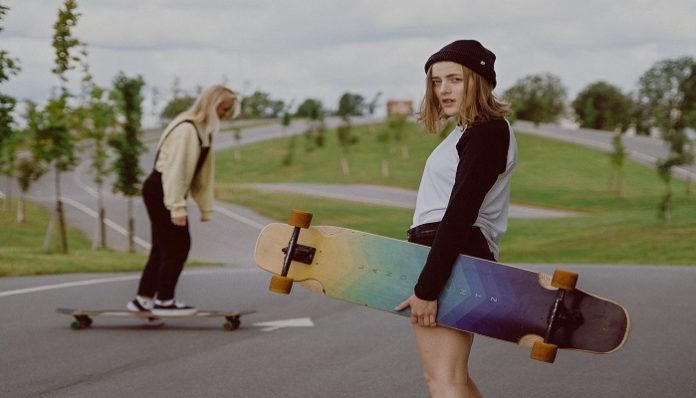 So firstly, if you don’t know what a guy’s girl is, you probably aren’t one. Secondly, if you are one, you probably never call yourself a “guy’s girl” because wtf– you aren’t someone’s property. Yes, you have a name and it isn’t bro or man!

But for those who don’t know, a “guy’s girl” is a breed of girls that get along with the male gender with such ease that she ends up having mostly close guy friends. She’ll have common interests with guys that other girls just don’t even bother about.

You know the type, that one girl at the bar that just bought the next round of beer, perfectly blending in with the group of fanatic guys dressed up in football jerseys. You can bet she’s yelling at the ref just as loud, if not, louder than the rest of the guys. Sports is a given: you wouldn’t be surprised that she watched the game last night or that she has plenty to say about that point guard who should’ve fucking passed the ball— more than just about his stunning looks.

These girls come from all lifestyles. They may be a little boyish, naturally attracted to the same interests that guys have and because of this, racks up tons of guy friends. They may have grown up surrounded by their brothers’ friends, basically growing up with an extra dozen other brothers. Whichever lifestyle they may carry, their interests and quirks makes relating with their male buddies easier than with their female ones. They understand guys more easily and takes advantage of their exclusive access to trustworthy male advice.

But what nobody ever talks about are the struggles these ladies have to go through.

Let’s start with how others, who just can’t relate, view her. Strangers will assume the worst. You see a girl surrounded by a group of guys and they’ll either think she’s a slut or a lesbian. Go even further and she may be stripped of all femininity, which in some moments can be understood. Surrounded by so much masculinity, she’ll unintentionally start adopting some of her guy friend’s quirks. “Oops, did I burp too loud?” These adopted traits also makes it easier for her guy friends to consider her as “one of the guys” even during times she doesn’t want to be. Honestly, fart next to me one more time and I will punch you. And yes, she can throw a mean one. But you’d be wrong if you assume she never gets her nails done. After all, what girl doesn’t like being pampered? She’ll take a break from her guys once in a while and spa it up with her girlfriends. Yes, she has girlfriends and she’s tired of everyone assuming she doesn’t have any.

Having so much male interaction, guy’s girls are expert friend-zoners. They’re constantly making and maintaining boundaries with guys and with such natural ease, to avoid crossing that sexual line. But on that same token, “Is this a date?” is a question she constantly asks herself when she meets up with a new guy. She’s easily approachable, which can get her in sticky situations. Blame her friendliness and easy going nature for being mistaken as flirting by unsuspecting guys. And once she finally gets past this stage, she’ll then move on to the next round of questions, “What do you mean you’re just friends?” To which she’ll reply by gracefully defending platonic relationships between guys and gals for the millionth time. “Seriously, we’re just friends!”

Now it’s just a theory but… she’ll probably be pickier than other girls when it comes to dating. I mean, if she’s surrounded by different kinds of guys, she’s bound to be particular about that one guy she doesn’t friend zone. But when she finally finds someone she deems worth dating, she might have to go through the band of brothers she’s formed around her. That’s because her guy friends can be huge cock-blockers.  Imagine going out on a Friday night out with five guys who feel protective over you like you’re their little sister. It doesn’t bode well for that cutie with the blue eyes that’s been eyeing you all night. And when she finally finds a boyfriend? You can bet she gets along with his boys. The bad news? Bedroom problems. A study by Cornell University & University of Chicago has actually found that the more a girlfriend gets along with her bf’s crew, the greater chance of him having trouble in the bedroom! EEEK.

Though these cons can put a damper on a girl’s dating life, they’re minor compared to the unique kinds of relationships she develops. Because of that, she has a clear understanding of both a boy and a girl’s world.

She’ll gladly pass up that jealous guy for a night out watching the game with the boys. And yes, she’ll take another pint of beer.

Forget Everything You’ve Been Told About Success, And Do This Instead