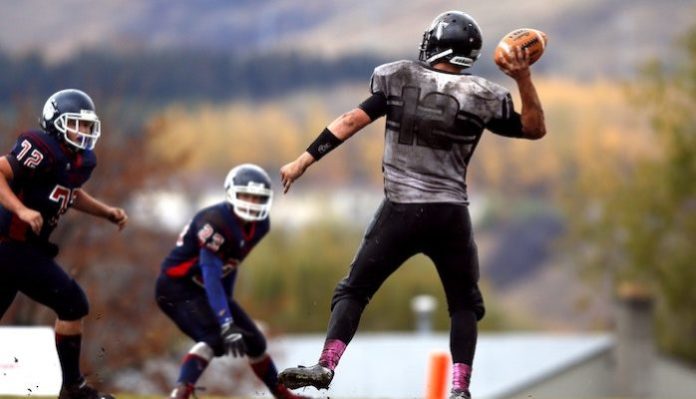 Fact: There is nothing more annoying than a girl pretending to care about football.

I have decided that I will not pretend to truly care about football. I get that guys think that it’s sexy and hot or whatever if a girl is all about sports and wears the jerseys, tweets at the players and drinks beer or participates in a fantasy league.

…Cool. Go for that girl, but just know that she is full of shit and very annoying.

Also, sometimes they get angry.

(That pretty much sums up football.)

Fact: Couples that go to games together are the ultimate worst.

You guys, a selfie is bad enough as it is on its own; please don’t take one of the two of you in matching outfits. And for sure, don’t post it on Facebook.

Fact: The best part about football is the dip.

This is where football gets fun for me.

If you want to sit on the couch and scream at people who can’t hear you and also don’t even know that you exist, that’s totally fine. But I am going to be in the corner enjoying all of the dips. You can’t be having a kale and craisin salad while a football game is on, lets just keep it real.

Fact: The Redskins are not a good team.

I grew up in Maryland so that means that everyone I know is either a Redskins fan or a Ravens fan. On Sundays, my entire Twitter feed is filled with dudes hashtaging things like #RGIII, #HTTR, and #HAIL. Stop tweeting in code, guys.

Also, every (American) boyfriend I have ever had has been a Redskins fan. I just don’t understand. THEY NEVER WIN. Like, THEY. NEVER. WIN.

All I know is that if I’m going to be a football fan, I’m going to like a team that occasionally wins. There is no fun in sticking up for guys who are just constantly fucking things up. I’ve already done my fair share of doing that by dating you losers; the Redskins need to give up.

Fact: I am a terrible football fan.

To be honest, there was a time when I used to try to be the cool sexy girl who knew about sports, and I tried hard.

I chose to like the New York Giants. They were on a winning streak, my Mom grew up in New York and I also look really good in blue, it all added up for me! Then, my Mom became friendly with Baltimore’s very own Joe Flacco.

My Mom was never a football fan before but between her new discovery of dip and her new pal, Flaco- she became a full-blown Ravens fan. My brother was already a huge Ravens fan so it kind of sucked because now I didn’t fit in with my family, but I was still sticking true to my blue team.

(At this point, I had moved to California and it made even less sense that I was a Giants fan, but my eyes just pop when I wear blue so I wasn’t giving up!)

Two years ago, the Giants were playing the Ravens at M&T stadium while I was home for Christmas. At the time, I had my Australian boyfriend visiting me for the holidays. (Terrible idea by the way, I don’t recommend it. Date domestically, ladies)

All this guy wanted was to go to an American football game (and for me to tell him I didn’t mind his foreskin). So, when the Giants were playing the Ravens, I took him to the game just like any good girlfriend would do. It was freezing. I was not enjoying myself. Anyways, I was confident that the Giants were going to win. They did not.

The Australian, my brother and all of his fellow Ravens-fan friends were singing that “Ohhh oh oh oh ohhhh Oh” song, and THE RAVENS WERE WINNING. They were having so much fun! There I stood, in my blue jersey, shivering and sipping my disgusting Bud Lite just thinking, ‘Man, that song is catchy as shit!…And their team is winning!’

…I just wanted to be apart of it!

Turns out, I look pretty good in purple too. I took off my Giants jersey, my brother gave me his Ravens jersey, and I never looked back.

The Ravens then went on to win the Superbowl so I think it’s safe to say that I’m just all around WINNING.

At the end of the day, we all just need to realize what football is really about. It’s Americans using grown men fighting over a ball as an excuse to drink and over eat.