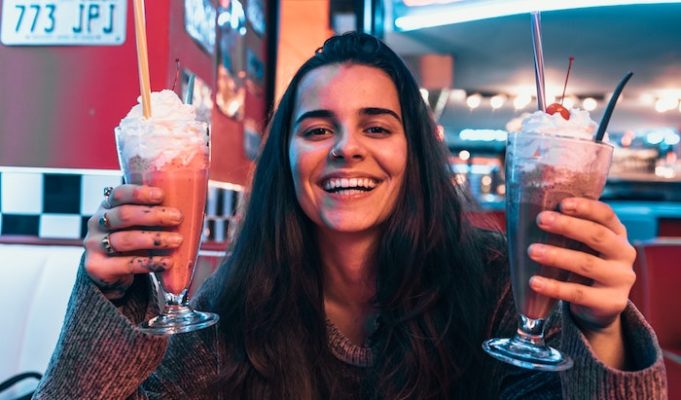 It’s three o’clock in the morning when you finally drop your drunk-ass BFFL off at her dorm. She collapses onto her bed moaning a language that only drinkers of Moonshine would understand, so you throw her a box of Cheez-Its to shut her up. She hugs the box and kisses it, snuggling up to it like you would to your boyfriend (or your pillow pet if you don’t have a boyfriend). She then proceeds to shovel crackers down her throat using  two hands. Things have escalated very quickly between her and the crackers. You feel like you are interrupting an intimate moment. You leave.

You begin to make your way to your shitty dorm on the other side of campus when suddenly you are blinded by a glistening light so bright that you hold your hand over your eyes and squint like an eighty year old woman who has lost her glasses. Is a tractor-trailer about to wreck me in 0.3 seconds? Has the sun fallen to earth? Is all of campus engulfed in flames? One could only hope.

You stumble backwards and open your bloodshot eyes to see that you have somehow miraculously ended up under The Great Golden M. MMM, says your belly full of Jäger. You WANT that quarter pounder with cheese. You NEED that quarter pounder with cheese. You shake your head no but your feet have been possessed by a force field so strong that you find yourself rapidly gravitating to the land of crispy McNuggets.

You blink. The sun is peeking through your window and you are lying on your bedroom floor. You are alive! What a terrible nightmare you had! But you look down and see a mound of crumpled yellow paper and a stream of Thousand Island dressing dribbling down your chin. You try to get up, you squirm, you toss, but you are shackled down to your bed by the twenty-pound love handles that have mysteriously grown on your sides overnight. Could this be real life? You fight hard. You kick. You punch. You scream. You pull a muscle in your non-existent abs. You lay there and you cry.

Suddenly your phone rings. It’s Ashton Kutcher calling to say you’ve been Punk’d and you’re just lying in a bed of super-glue. Duh. But NO. It’s your Cheez-It nibbling friend, asking if you want to head to Mickey D’s for some morning McLattes and McMuffins and McShitOMGwhatHAPPENEDlastnight?!?!?!? Flashbacks of processed meat and grease attack your mind. It was real. You begin to sweat. She wants a response. She could never know the truth! She would know you have no standards. No self-respect. Seven burgers in one night? You definitely have a disease. You are dirty. Unpure. RUINED. Officially a McSlut. You lie and say you have to go bowling with your aunt at noon. Really? That’s the best thing you could come up with? You hang up the phone as your sphincter muscles join together to make you pay for your sins. The McGurggles have attacked.

For the next three hours you cry on the toilet, Snapchatting your sister and calling your mother, hoping for some mental support. But all they do is laugh.

“You should have said McNo.”

No matter what it is that you unconsciously consume—Jimmy John’s, Chick-Fil-A, three gallons of Ben & Jerry’s, or that ratchet 99 cent pizza from the snack shop that has mice sitting on the front counter (you soberly swore you’d never enter those doors!)—‘drunk eating’ is a vicious cycle that college kids will never escape. You drink, you eat, you wake up in a pool of sweat, grease, and tears, and you swear to never ever EVER stoop so low again. But then Tuesday arrives and you’re sitting on your bed, sending selfies to your friends who are already passed out, and you slowly begin to fade into sleep while chowing down an entire bucket of cheesy pretzel bites wrapped thick Canadian bacon.

You’re shaking your head right now because you are ashamed to admit it’s true—but it’s okay. We’ve all been there and will continue to be there. At least if you gain thirty pounds this semester, thousands of helpless college kids will be gaining the thirty pounds with you.