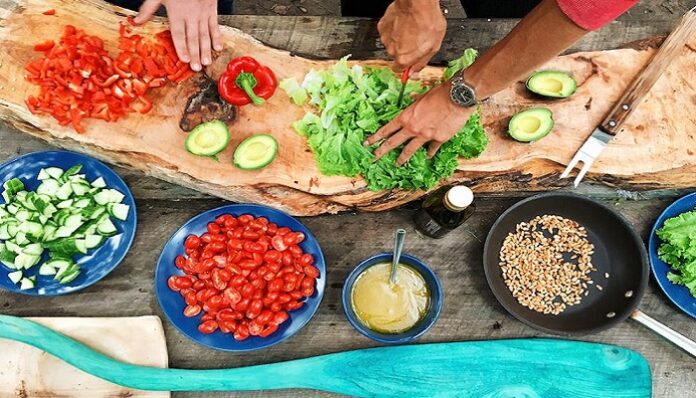 It’s a lot easier to live a plant-based life now. Whether you’re a vegetarian, vegan, or just someone trying to reduce your damage to the environment, there are many options available to you.

I became a vegetarian many years ago. Back then, the idea of having more than one option available for dinner was unthinkable. Over time, I slowly started to make other areas of my life more ethical and sustainable too, and I’m currently working towards living a fully plant-based life.

Everyone’s motivations for living a plant-based life differ. Personally, I do it for the animals and the planet. But, like many, I struggled with the change, both practically and socially. So if you’re thinking about making the change yourself, here are some of the most useful tips and tricks I’ve picked up along the way:

1. Don’t try to find a direct replacement for meat.

I didn’t struggle with giving up meat because I didn’t like it that much anyway. But if you’ve gone your entire life centering all your meals around meat, it can be very difficult to reframe the way you look at cooking and eating. One of the most useful ways to get past this is to see meat substitutes as a guideline, not a replacement. Vegetarian chicken obviously isn’t chicken. So don’t expect it to cook and taste the same. Instead, use it as an idea for the kinds of meals you can make with it instead.

2. Take a break before trying out new food.

This is especially useful if you’re eating a more vegan diet that doesn’t include animal-based milk and cheese. Try taking a month between giving something up or replacing it. For example, let’s say you usually eat loads of cheddar cheese. So, before you start trying out some replacements like Violife or Nuurish, take a break. That way, you won’t compare them as much. You might even find you don’t miss your old diet as much as you thought you would.

3. Find out what vegetarian food you already love.

Lots of the food you already eat is probably vegetarian already — you just didn’t notice it. Margarita pizzas, creamy tomato pasta, Oreos, stuffed peppers, risotto, and jacket potatoes are all vegetarian, and the list doesn’t end here. So, you probably already have plenty of vegetarian meals and snacks you know and love to get you started, so take a look!

A lot of food that looks vegetarian isn’t. For example, many candies like M&M’s have animal-derived additives. Tortilla wraps have shellac. Some cheeses contain rennet. And some wines and beers contain gelatins.

With that said, you’ll definitely make mistakes. So, don’t beat yourself up if you accidentally pick up a veggie wrap with a shellac tortilla, especially if you’re new and still learning. It happens to all of us. Just get used to the many different names of animal products that are hidden in seemingly plant-based foods.

5. Don’t panic about your protein.

You’ve probably had someone tell you that you’re going to develop a protein deficiency if you don’t eat meat. Well, you won’t if you stick to nutritious foods. For example, lentils, beans, nuts, and peas are rich sources of protein. It’s important to try and eat a varied diet so you get a range of vitamins, proteins, and amino acids in your diet. And if you’re still worried, there are plenty of great supplements available from good drug stores or supermarkets.

Still, if you notice you feel more tired than usual or suspect a deficiency, be sure to talk to your doctor and get a blood test. That way, you’ll stay as healthy as possible while maintaining a vegetarian diet.

6. Plan your first nights out.

Eating out as a vegetarian has gotten a lot easier in the last decade, but it’s still not the case everywhere. Before you go out, make sure to check the menus. Also, don’t be afraid to ask your friends to go somewhere else if there’s nothing for you to eat.

You might have to sit through some classically boring vegetarian dinners, like the side salad and chips at a steakhouse. But eventually, you’ll find some amazing vegetarian places to visit, making it easier.

7. Prepare yourself for stupid questions.

I’ve learned first-hand that transitioning to a plant-based diet comes with many stupid questions. You will be asked the same dumb, rude, and annoying questions all the time. Some of them include:

Here’s the thing: these people know the answers already. They just want to bother you. It’s difficult, but try to let it go, and don’t ever apologize for trying to make the world a little better.

8. Don’t panic about not being fully vegan or plant-based yet.

Not all vegetarians want to go vegan. But most of us do it to transition into a vegan lifestyle at some point. Whatever you choose to do, you are taking active steps to reduce your negative impact on this world. We would save more animals and create a greater positive change with a million imperfect vegans trying their best than a hundred perfect ones.

9. Don’t forget to enjoy yourself!

It might all be a little overwhelming and confusing at first. but pretty soon, you’ll find your flow. So allow yourself to just take it in for a moment; enjoy your meals, live your life, and be proud that you’re taking steps towards a kinder, more sustainable planet for all of us.