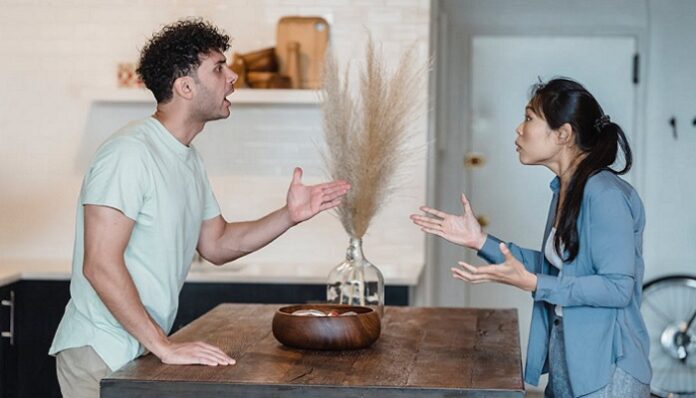 I’ve been in a loving relationship for a very long time. But I am still amazed at how long it took me to learn some of the most basic lessons about how to maintain a long-term romance. Case in point: name-calling. You cannot do it.

Which is a surprisingly painful thing to accept. Not because I’m a verbally abusive bully or anything. But simply because when you really, really love somebody, there is no one in the world who can make you angrier than that person. Because you actually care about what that person thinks about you. So, when you’re a couple with that much emotional baggage, passions definitely get inflamed during arguments. And, if you’re not careful, that’s when people start calling each other names.

And names might sound like a minor thing to worry about. If you’re screaming at each other about a truly important issue, does it really matter if someone got called an obscene name?

It took me way too long to realize this, but name-calling matters. It matters because it can completely derail a fight into something much less productive and much more needlessly hurtful.

This is important for two reasons.

First, because some fights are necessary. You need to have those fights, those angry debates, to move forward with your relationship. And, second, because I’m petty, I like to win fights (which is a horrible thing to admit), and the sad fact is, whoever resorts to name-calling first, always loses the fight.

People like to deny the impact of name-calling. They say, “Oh, we’re both completely foul-mouthed, we talk like sailors. We always call each other names.” That may be the case, but I truly believe, both on a conscious and subconscious level, that our brains keep score during our big relationship fights.

And the second our brains see a name or a personal insult on the scoreboard, everything changes.

Because the second you call your partner a name, the original fight stops and a new one begins. Suddenly, everything you were arguing about before has to line up behind “what did just you call me?”

Yes, if you think your loved one is being a jerk during a fight, calling them one can be ridiculously satisfying. (It feels so good.) But it does you no favors. That one word has instantly made you the bad guy (or gal) in that scenario. It’s like accidentally sinking the 8-ball while playing pool — you automatically lose.

Even if your partner was being awful, if you’re recounting the incident to your friends later, and it comes out that you were the first one to start throwing around the label, sympathy will not be on your side. That may seem childish, unfair, and reductive, but it’s true. Trust me, I’ve been married for 17 years and I can tell you from firsthand experience: it never ever works out well.

However, that doesn’t mean that you can’t defend yourself or let someone know that you think they’re being awful. The key is just avoiding those childish, derogatory names that are so much fun to say.

The best strategy I’ve found is substituting adjectives for insults.

If your partner is truly being an asshole, don’t use that word. But feel free to tell them that they’re being cold, cruel, spiteful, indifferent, thoughtless, nasty, unreasonable, ignorant, or mean. There is no problem with you whipping out your verbal thesaurus and telling them, with a great variety of phrasing, how you really think they’re acting.

Because, even if the adjectives make them angry (and they probably will), those are just normal, human, descriptive words. Those words might sound mean, but they have some inherent meaning that your partner will either understand or argue against.

But, when you call someone a “bitch” or an “asshole” (or worse) — especially if they’re an important person in your life — you’re not trying to convey anything of any meaning. You’re just trying to hurt them in the clumsiest way possible. And no one is going to listen to that. They’re going to shut down immediately and try to hurt you back. It may even become verbal abuse.

So, as hard as it can be, for the good of your relationship and your own sense of moral superiority, you can NOT call any names during an argument.

If you actually want your fight to accomplish something, or to be about more than just insults and cruelty, it’s a necessary step you have to take. Even if they are, unquestionably, being an asshole, you gain nothing by pointing it out.

6 Things You Should Accomplish By The Time You’re 25