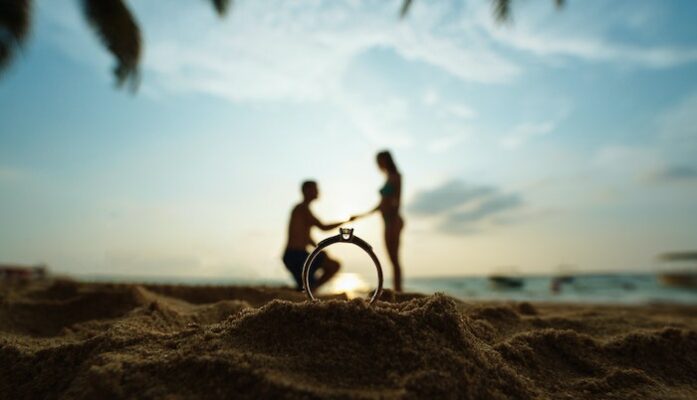 Before you can have that dream wedding, you have to do one minor thing: propose!

Many women (yes, even all of you independent ladies out there), fantasize about the day their dream man drops down on one knee and asks for their hand in marriage. Even if you’re single, you likely already know what kind of wedding ring you want, where and how you want your man to propose, the type of wedding dress you want to wear and in what picturesque location you want to get married — and likely have a Pinterest board dedicated to it all.

Of course, our fantasies can get a little out of hand and may even be impossible for our guys to live up to. In honor of National Proposal Day which is on March 20, 2018, the team at Zola, a wedding planning and registry website, asked real newly-engaged couples for their thoughts on everything engagement-related.

Here’s everything you need to know about how to propose, from start to finish.

Pick out the engagement ring together.

It’s not secret that wedding rings can get really expensive. It’s an investment — one that you should make as a couple. According to Zola’s survey, one in four couples would prefer picking out their ring together before the proposal. There are so many different styles of wedding rings and chances are your woman has an idea of the one she likes best. While no woman who really loves you would ever say no to your proposal based on the price or style of the engagement ring you choose, why risk it?

As someone whose nail polish is chipped about 93 percent of the time, I agree with the 40 percent of women Zola surveyed who agreed they wanted a fresh manicure for their dream proposal. However, it’s not mandatory. Treating your girl to a random manicure sesh might give away the surprise if it’s not something you usually do.

Whether it’s the place you first met, your favorite restaurant, or while you’re on vacation, the ideal setting for the perfect proposal is anywhere outside of the home. According to Zola’s survey, only 5 percent of couples are interested in getting engaged at home.

Make it a surprise.

If you’re ready to propose, chances are you’ve already talked about marriage and likely even picked out a ring. A surprise proposal doesn’t mean you should blindside your partner — just don’t make it obvious when it’s going to happen. According to Zola, 89 percent of couples wanted their proposal to be a total surprise. This isn’t just a personal preference, either. A study found that the brain reacts more pleasantly to surprise happy events than to planned happy events.

Even though most couples want their proposal to be a surprise, that doesn’t mean you should turn it into a flash mob in front of the entire neighborhood. According to Zola, 73 percent of couples prefer getting engaged without any observers. This should be a pressureless moment for the two of you to cherish forever.

Despite everything being Instagrammed these days, it turns out most couples would rather not have the actual proposal captured. Only one in three couples told Zola they’d want someone to photograph the proposal. Makes sense — it’s hard to hide a photographer when you’re trying to keep a proposal a surprise!

It’ll probably take everything in you not to tweet, Instagram, Snap, or post on Facebook about your engagement right away, but it’s only fair to tell your parents first! According to Zola’s survey, 96 percent of couples called their parents with the news before posting anything on social media. Share your happy news with those you love first.

Zola’s survey revealed that 57 percent of newly engaged couples announced their engagement on social media within 24 hours of the proposal. No one wastes time anymore!

Don’t be ashamed of that ring selfie.

Whoever said ring selfies are tacky was probably just jealous of someone else’s rock! 54 percent of couples agreed that ring selfies are awesome. So go ahead and flaunt your love, your relationship, and most of all, that new shiny piece of jewelry you’ve got on your hand!

Have a social wedding.

Everything is on social media these days. And while having a professional photographer is still par for the course, 61 percent of couples said they plan to have a special wedding hashtag for their big day. You can even take it one step further and design your own Snapchat filter for your wedding like 27 percent of the couples Zola surveyed. Anything goes!

Photo by sergey mikheev on Unsplash