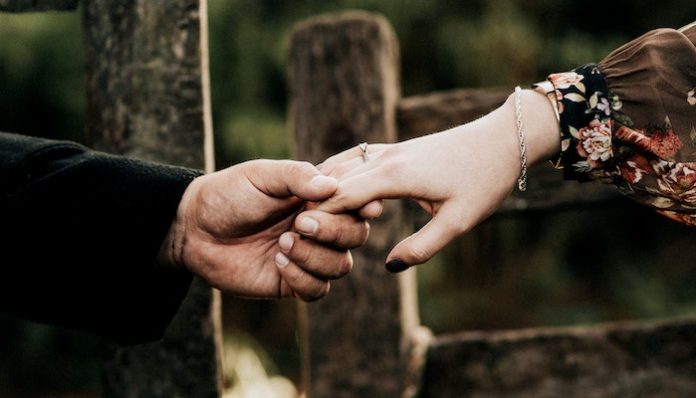 I was two years out of college, armed with a degree in English, an ambition to write, and neither the skills nor the confidence to pursue any kind of a real career. I’d moved back home to Cincinnati, Ohio and was living with my parents. I slept in my teenage bedroom, the posters of Echo and the Bunnymen and Bob Dylan still tacked to the wall, the house that once seemed plenty big suddenly felt as cramped as a packing crate.

My parents, then in their early sixties, had spread out when I went to college. They no longer slept or watched TV in the same room. I was their youngest, the last to leave the nest and the one who flew back, my earthly possessions in a bunch of cardboard boxes.

My older brother and sister were both married, owned houses, had jobs and kids and brand new cars. I drove a hand-me-down ’71 Nova and couldn’t imagine paying off my student loans on the 13k I made every year as a waiter and a bartender.

When I met Sarah, she seemed like an adult. Adult. She worked a real job. Okay, she was the new manager of the cheesy restaurant I worked in. But she had a salary, benefits, a nifty title — manager! — a dog, and a car manufactured in the decade we were living in, the 1990s.

She’d moved away from her home in Nebraska to start a life, far from her family. She knew no one when she moved to Ohio, and, to me, stuck in my overheated attic bedroom, listening to my parents flip through a million brainless cable channels, Sarah seemed like a pioneer, a Magellan who had set out with her own liberal arts degree from a giant Midwestern university unsure of what lay ahead.

And she’d found something. Stability. A decent enough answer to the question, “So what do you do?”

It didn’t hurt that Sarah was eight months older than me, pretty, confident, possessed a sharp sense of humor and a willingness to laugh at herself. When I first laid eyes on her, in her managerial position at the restaurant, I thought, “No way I’d ever go out with someone like that.” More accurately I thought, “No way someone like that — an adult — would ever be interested in me.”

I assumed she already had a rich life in Cincinnati. Friends, activities, men. All the waiters drooled over her. One even said, “If someone gets with her, he’s the man.”

Well, after a few weeks of working together, Sarah grew bold enough to ask me out. She called me — at my parents’ house. (It’s always cool when an adult woman calls and your dad answers the phone, then has to carry it to your room. No cellphones or texts back then.)

She invited me to a Reds’ game, since she knew I liked baseball. And that’s how it started. A baseball game on a warm June night, beers and hot dogs and more beers after the game and making out in Mt. Adams overlooking the city lights. Did I mention she had to drive because my car embarrassed me so much and was so unreliable it couldn’t be counted on to make it through an evening?

Things moved quickly after that first date. Pretty soon, I was spending every night at her apartment. Between work and Sarah, I almost never saw my parents. But going over to her apartment was much more enjoyable than sitting around with my mom and dad.

And Sarah, surprisingly, seemed to have plenty of time for me. When I called her apartment, she was there. When I left work, she waited for me to come over. In retrospect, I figured out that she wasn’t available so much simply because she liked me. She was always available because she was in the same boat I was. Perhaps even more so.

She knew no one outside of work, and a manager can’t just hang out with her employees. She had no family in the area. She worked a job with no connection to her college degree.

She wasn’t sure what to do next in her life. She, too,  was lost and lonely. That was our main connection.

A few months after we started dating, Sarah took a job with a retail company and moved to Indianapolis. I went to see her every weekend, happy to sleep with her in her even nicer apartment. At some point, the subject of marriage came up. And, as hard as this is to explain, I’m not really sure how we ended up engaged and marrying young.

Her parents owned some diamonds, an investment they’d made years earlier, so her mom offered one to us. Suddenly, a ring showed up in the mail. I remember Sarah sitting on the couch with her planner out. “Well, if we’re going to do this, we need to pick a date…”

Yeah, I was engaged. And then pretty quickly married. Whirlwind romance usually means something positive. This was a whirlwind kind of like a small tornado. And there were a couple of problems.

Shortly before I officially moved in with Sarah — and just before we got married — I learned she had trouble with money. Even though she made a livable salary at her retail management job, she had somehow bounced 22 checks, incurring massive penalties in the process. I went to the bank and straightened it out by opening a joint account for us.

And then I learned she had “borrowed” some money from the safe at work. I learned about this one night after I’d had too many beers. I remember slamming my empty bottle down on the coffee table in frustration. I remember Sarah taking the bottle out of my hand — and I felt lucky it hadn’t shattered and sliced my hand to pieces — and promising to put the money back. I assume she did. I don’t know where the money came from to pay the safe back since she’d just bounced 22 checks.

And then there was the credit card. Right after we got married, Sarah went shopping with her mom and came home with a bunch of new clothes. About $300 worth. When I asked where they came from, she said, “My mom bought them for me.” Fair enough. But then the bill came. To our apartment.

Lesson learned: even people who appear to have their acts together, who appear to be adults, sometimes don’t. They just plain don’t.

The other problem was romantic in nature. You see, my engagement to Sarah wasn’t my first engagement. I’d been engaged shortly after graduation to my college girlfriend, Molly. We’d dated during our junior and senior years, moved in together, and decided to get married. But neither one of us was ready for that.

Again, the pressures of being young and dumb and directionless drove us apart. She moved to the east coast while I moved back with my parents. But we talked every few months. Saw each other a couple of times before I met Sarah. And I never forgot her.

It didn’t take long for me to realize that being married to Sarah wasn’t going to last. At first, I told myself to hang on for two years. A divorce after two years won’t seem so bad, I told myself. Then my goal fell back to one year. Then I tried to hang on until Sarah’s younger sister got married in June. I can’t leave Sarah and not attend the wedding, I told myself.

But leave I did. In April. I’d told Sarah I was leaving about six weeks earlier. We stopped having sex at that point. No way I was coming out of the marriage with a baby. Sarah went to get Depo-Provera injections. Would the person who lied about money and credit cards lie about getting a birth control shot? I didn’t aim to find out.

Where did I end up on that April day when I left my starter marriage?

Back in my parents’ house in Cincinnati, crying in their living room as the full weight of the past year landed on me.

I’d failed at everything. No career. A broken marriage. Seventy dollars to my name. Student loan and car payments. I was a boomerang kid before the term had even been invented. And I’d boomeranged twice.

I only saw Sarah one more time after that. It was the day we went to court. Those proceedings were surprisingly brief, about as complicated as getting a driver’s license, and then we were divorced.

Before we went in, we talked. Awkwardly. She asked if I wanted to try counseling to save the marriage. She asked if I was gay because we’d stopped having sex. And then she asked if I left her because of Molly. Apparently, just a few days before I moved out, I’d spent three hours on the phone with Molly while Sarah was at work. It was Sarah’s turn to be surprised by an unexpected bill arriving in the mail.

I told her the truth — I’d be leaving whether Molly existed or not. And I offered to pay for the long-distance call, which she declined. When we left court, we hugged goodbye. No one said anything profound or meaningful. It was all over as uneventfully as it started.

The other day I found Sarah on Facebook and saw what she’d made public since we’re not officially “friends.” And I’m not sure of the etiquette of “friending” one’s ex-wife after 20 years. She’s married, has two kids. She looks happy.

And what would Sarah see if she returned the favor and checked out my Facebook page? She’d see that I did what I always said I was going to do. I’ve published books. I’m a tenured English professor.

And she’d see she was at least partially right about something: Molly and I got married just over two years after I left Sarah and we’re about to celebrate our twentieth anniversary.

Would Sarah feel hurt or vindicated by seeing Molly and me together? I hope not. I hope she feels the same way about me as I feel about her. I hope she wonders what she was thinking way back then when she went down the aisle with someone, eventually marrying young, just because she was scared and lonely and wanted to feel like an adult. I get it, I really do.

Photo by BRUNO EMMANUELLE on Unsplash

7 Subtle Signs It’s Time For You To Move On