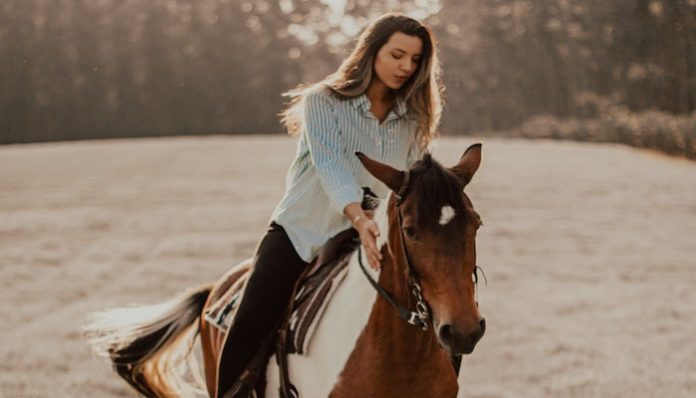 My name is Ava Falcon and I’m 25. I live in Montana. I work on a cattle ranch and I train young horses to accept riders for the first time. Out West we call it “colt starting”.

Colt-starters are sometimes referred to as “bronc-peelers” and honestly, I find that rather catchy. You’ve probably seen it in some western movies: a young man gets on a wild horse, the horse jumps around (cue Spirit: Stallion of the Cimarron soundtrack), and eventually the movie cuts to the young man taking his new horse out on the prairie.

Colt-starting is sort of like that, but I try to avoid having the horses really jump around on me.

In fact, I think of it as if I’m trying to write a peace treaty with the horse.

So, if you’re interested, I’d like to share some stories with you about what it’s like out here in the West for a regular 25-year-old gal working on ranches, freezing in the cold, and trying dang hard to hang onto broncs.

Our first story is about Sally. When I first started riding Sally, she was a giant three-year-old who had been turned out for about a year. That means that, rather than being confined to a stall, she could run free on pasture. She was started as a two-year-old before I began working at the ranchero, and she had about 10 rides put on her so far.

Sally was bigger and badder than any colt I had ridden in my life.

The first couple of weeks were rough for us. My approach to Sally was not very helpful and I had a lot of learning to do when it came to her. I was too big for my britches and she put me in my place.

Between rearing, bucking, running off, and a plethora of other bad behaviors, I had gotten to the point where I just didn’t want to ride her anymore. Quite frankly, she had beaten me more than once and I was afraid of her. And she kept getting bigger.

In the fall, on the ranchero, we bring all the cows in with their babies. This is the time of year we sell the babies. On a ranch out West we call that time “weaning.” My boss let me know as our fall works started that he wanted people to ride Sally some more.

So on a 30-degree morning, I saddled her, loaded her in the trailer, cussed more than I should have,  and off we went to wean.

By the time we got to where we were going, the temperature had dropped 20 degrees, the wind had picked up, and it was snowing. It was my first fall works at the ranch and I had never been so cold in my life. In fact, Sally was cold too. I think we both were shivering.

The work day was miserable in that kind of weather and I was so uncomfortable I didn’t have any time to worry about Sally. Actually, the rest of our fall works were a lot like that day. So day after day, I saddled Sally, we froze all day, and I made sure to grain her extra when we got home because she (like myself) had begun to lose weight.

By the end of fall works, I not only trusted her, but genuinely liked her.

Sally was turned out last winter and I brought her in for branding, where she roped and drug more calves with me than I had ever caught before. She came with me in the summer and hung in there with me when I had to doctor calves and tie off solid for the first time in my life.

It’s just amazing how suffering through some cold days with this horse helped me to find some common ground with her. And now, like most big sorrel horses do, she really has left a mark on my life.

I guess the lesson would be that sometimes going through some miserable, cold days, can help you find a friend in an unlikely place.

Photo by Paula Palmieri on Unsplash

10 Interesting Facts About Cinco de Mayo That You Should Know