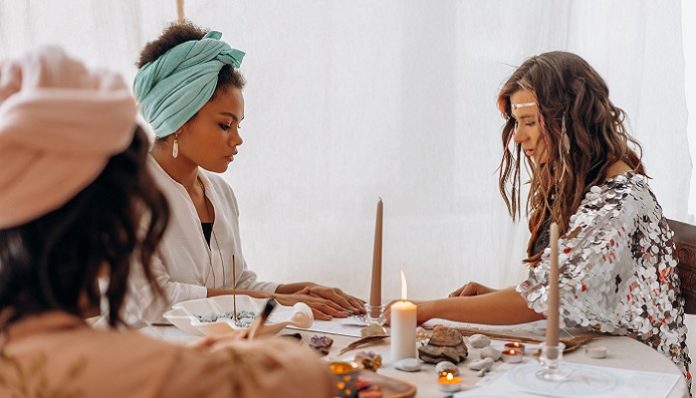 I’ll admit it: I was stuck in a rut. After yet another breakup (same type every time — great chemistry, smart, successful funny, yet lacking the emotional availability to be in a relationship), I was beginning to wonder if my love life was ever going anywhere.

After playing Tegan and Sara‘s “Shock to Your System” repeatedly for days belting out “What you are is lonely” in the shower, I began to pull myself together. I needed a plan. One that did not involve singing. I needed some healing. Love healing.

I had gone to therapy. I had done all the work exercising the demons from my past, the toxicity of living in a highly dysfunctional codependent family. But even after therapy, I have to admit I wasn’t terribly excited about dating.

It can be exhausting, soul-sucking, and time-consuming. So when I heard about Reiki, I couldn’t help but wonder if it could be that extra jolt I needed. Like a colonic, metaphorically speaking.

Reiki works by moving energy or chi. Toxic energy is released, ties to the past are broken, and voila! You are a new person. Admittedly, I had a hard time believing in the concept. I believed in the law of attraction because it seems much more logical. It’s rational (to me anyway) that like attracts like, and for every action, there is an equal and opposite reaction.

But the idea that someone else could actually move energy in and out of my body seemed at first too out there for me to believe. Then again, I also think anything is possible, and what we know about our world is limited at best.

I figured I had nothing to lose by giving it a shot, so I looked up Reiki practitioners on Yelp. Elaine was one of the first names to pop up. With over 40 five-star effusive “she changed my life” reviews, I figured I couldn’t go wrong. I made an appointment.

Prior to the appointment, Elaine gives you some reading homework. I was instructed to read Power vs. Force, which explains the connection between science and spirit (which I still haven’t finished).

Arriving at her apartment, I immediately felt a sense of calm and peace. She was dressed in a long sweater and leggings and her strawberry blonde hair was wrapped up in a bun. She looked like a normal woman. I’m not sure if I expected her to be dressed in some sort of tapestry or long-flowing caftan smelling of patchouli and singing “Kumbaya,” but thankfully she was not. In fact, Elaine is no “woo-woo” type. As I came to learn, she was quite the opposite.

She was someone with a grounded belief in science and quantum physics. She believed there was more to the world than what meets the eye and that it’s possible to harness energy even if we can’t see it.

Considering people didn’t even understand the concept of radio and light waves for most of human history and we only use 10 percent of our brains, I reasoned that perhaps she was right.

Her apartment was dimly lit with candles and soft music playing in the background. She offered me some tea as I curled up on her very comfy couch. The session started with an intake of where I was and what I hoped to achieve.

It was a two-and-a-half-hour intense discussion to be precise. Elaine did not f*ck around. She made sure to get every last bit of information out of me before beginning the actual reiki session, resulting in a total of 5 to 6 hours spent together.

We spoke about every guy I dated, old patterns, family, friends, and career. Her presence was calming and comforting, like a warm fuzzy blanket you just wanted to curl up with. She was able to frame my past in the context of learning experiences helping me to see that ultimately everything was about spiritual growth. It was like therapy with a spiritual counselor rather than a therapist.

“By the way, my left-” I said to Elaine after I felt like I had gone through everything.

“Your left leg is tingling,” Elaine said cutting me off.

“What?” I asked incredulously. There’s no way she could have known that. It wasn’t like I was walking with a limp or something.

“Your left side is receiving. The right side is about giving. You’re in a receiving mode. That’s why it’s tingling.”

“Oh,” I responded nodding my head. “I just thought it was sciatica from SoulCycle. How did you know that?”

She explained that she can feel someone’s physical, emotional, psychological disposition before she even gets started with the actual reiki session. She may have been right, but I’m never going back to SoulCycle.

Our chat session had finally exhausted itself and it was time for me to lie on the table. Elaine told me she would work on releasing any residual toxic energy, opening up my heart, and making space for new more positive energy. She explained that when she’s working she focuses on neutralizing one’s negative emotions and getting rid of their subconscious blocks. Elaine maintains a high vibration; anything that doesn’t match the highest vibration will leave.

During the Reiki session, the “patient” is shifted to their highest potential frequency. Of course, like anything else — a diet, for example — it’s up to you to want to maintain your new frequency. If you go back to complaining about your crappy life or hanging out with co-dependent types, your session will become less effective.

As she explained this, it reminded me of how when meeting certain people, you can be immediately drawn to them or repulsed for no outwardly logical reason.

I remember once when at an ashram, I saw a blond curly-haired girl from a distance and immediately decided we should be friends. I had no idea why and knew if I said that to her, I would seem like a kook. Then, I didn’t get the chance to speak to her the entire time until the last day when she happened to be sitting on the stairs as I was coming down with my bag.

Randomly, she asked me if I was going to Brooklyn. To which I responded yes and offered a ride back. Fast forward years later and we are great friends (I even threw her baby shower). She is one of my most spiritually-minded gal pals.

In retrospect, had she been the wild, crazy party girl she had been in years prior, I’m sure I would have never been subconsciously drawn to her. Perhaps in raising my vibration, I would start attracting the right guys in the same fashion.

I lay down on the table and closed my eyes as Elaine placed various rocks and crystals all over me. As she pulled on my legs, I felt my chest tighten as though I was short of breath. At one point I felt the rocks “whirl” and land in between my legs.

Startled, I tried to reach down and tried to move the rocks. But to my utter bewilderment, nothing had moved. Elaine remained silent as she continued working on me. I felt nauseous at one point and my whole left side began to tingle.

When it was all over, Elaine encouraged me to take a brief walk to get some air and take a taxi home. The loud noise and bright lights of the subway would be jarring to my subdued state.

Drowsy from the whole experience, I went home and passed out. I woke up the next morning to find a bright red itchy bumpy scaly rash on my chest.

So I stared at it, dumbfounded. I hadn’t switched detergents or body washes. I wore an old tank top and yoga pants to my session the night before and an old tee to sleep in. There was nothing that could have given me a rash. And even if there had been, I would have been red everywhere else, not in my cleavage which is the one place where the fabric doesn’t touch the skin.

Was it the reiki?!

I emailed Elaine to tell her what happened. She explained it was my heart opening up. It continued to peel and flake over the course of the next few days until it disappeared. Elaine had also told me that people from my past would try to reconnect with me. I laughed it off at the time.

After all, we’ve all had someone from the past resurface from time to time but at the present moment I couldn’t think of one person who could possibly resurface.

A few days later I received this text:

And finally this one:

I was surprised, to say the least. (Side note: why do guys think you’ll have their number saved when you’re clearly not dating them anymore?) Not only had I not heard from the last person in years, I hadn’t even thought about her! I literally forgot we were ever friends.

Last but not least (Elaine didn’t predict this, but the timing was strangely coincidental and meaningful), my father was diagnosed as bipolar. His diagnosis came about after a chain reaction to something I had said, which I don’t think I would have had the balls to say before. Oddly, it felt as though a huge weight had been lifted from me.

Cliché perhaps, but there’s no other way to describe it. His diagnosis made me feel free. I always suspected he was bipolar. But no one else in my family seemed to be interested in my very unofficial diagnosis.

Growing up, I always walking on eggshells hoping something I said didn’t result in another volcanic eruption or declaration of impending suicide attempt. I began to feel as though I was responsible for his outbursts, my “bad behavior” causing him to seethe with fury or plummet into depression.

As I grew into adulthood, I began to understand that wasn’t the case. But emotional scars don’t just fade even when you want them to, and on some subconscious level, I carried some of that behavior into relationships.

It’s been a month now since my Reiki session. Have I met Mr. Right? No, not yet. However, my life has been blissfully free of anyone emotionally unavailable. While I’ve had dates, their lack of progression into something more has been due to lack of chemistry rather than lack of emotional stability. And I’m definitely not tiptoeing around anyone no matter what their behavior.

Would I recommend Reiki? Yes, definitely. Though it’s far from a quick-fix solution, I had no doubt that something within my energy had changed. After all, it’s not every day my cleavage turns bright red and starts itching.