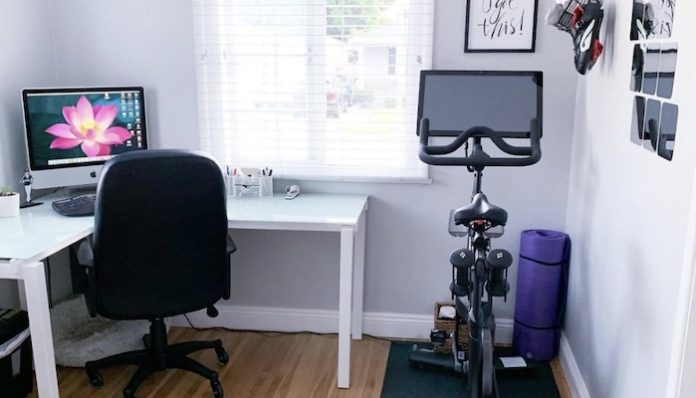 You’ve signed up to dating apps and given your number to that cute barista in your local coffee spot, but have you tried using Peloton — yes, the bike that was featured in all of those 2019 holiday ads that were heavily mocked before it became a massive, viral piece of 2020 Covid exercise equipment — to revive your dating life?

That’s exactly what some fitness-minded singles are doing.

Looking for love via Peloton might be a niche way to pursue romantic interactions but don’t knock it ‘till you try it.

Peloton has seemingly become a nexus for virtual fitness gatherings in the age of WFH and social-distancing.

The platform is known for its cultish following of devoted fitness fanatics who stream live classes online from their stationary bikes and treadmills.

But behind the high-fives and logo emblazoned merch is a tight-knit community. Tribes of Peloton users have been connecting through Facebook groups and Reddit posts since the company’s 2012 launch, forming exercise groups and friendships.

So it makes sense that some of these virtual connections have developed into real-life romantic ones.

Since options to contact people directly through Peloton are limited, most Peloton flirting happens on Facebook groups. Unless, of course, you count virtual high-fives during a Peloton class as a form of seduction!

One anonymous Peloton user said, “I usually do a live boot camp class Monday at 5 pm. The same dude high fives me in every class. Is Peloton flirting a thing? Like the new Linkedin flirting?”

The answer is yes, according to other users.

Some singles groups have over 4,000 members but you could even try your luck in other niche Peloton interest Facebook groups from Howard Stern Peloton Fans to Broadway Fans of Peloton.

And if you’re really feeling brave, a video-chat feature on the app enables users to have face-to-face time with other Peloton users during live classes. The feature was presumably conceptualized for friends to use, but there’s nothing to stop you from getting your flirt on while you sweat it out on your bike.

Joanna Schroeder, a writer and editor from Los Angeles who’s been a Peloton user since 2018, says this is one of the ways brave singles reach out to their Peloton crushes, but she’s not sure this is a great approach.

“In one of the Facebook Peloton pages I’m in, a woman rider was getting herself pumped up to ‘shoot her shot’ with a guy she thought was super-hot, and with whom she’d been sharing high-fives for a while. In that discussion, people encouraged her to look and see if she could screen-chat with him.”

“My own reaction was horror!” says Schroeder. “I can’t imagine, if I’d activated the video-sharing option on my bike, having some stranger pop up wanting to chat with me. It feels incredibly non-consensual and if I were single, I would probably immediately disregard that person for not respecting their crush’s personal space.”

She says that reactions to this idea were split among the riders in the group. Some thought it was a cute way to “shoot your shot,” while others were just as shocked as she was at this approach.

“I’d love to know if this ever ends up working for people,” she said. “I would guess some people — especially men — probably love it.”

And flirting through Peloton doesn’t have to be limited to virtual interactions.

Sarah, a 50-something mom-of-three who works as a fashion executive in NYC and preferred not to disclose her last name, has formed close relationships with fellow fitness fans on Peloton, even translating online networks into real-life connections.

After ending her 22-year marriage in 2014, Sarah spent the following years have mixed success on dating apps.

She purchased her Peloton bike in 2018 after learning about it through her boyfriend at the time who was working for the company. After the end of their relationship, the bike sat idle until early 2019 when she began riding with Olivia Amato, a popular instructor on the platform.

She quickly became an active user and now uses the Tread — Peloton’s version of the Treadmill — at least 6 days a week.

Joining a Peloton group on Facebook was an easy way for Sarah to hold herself more accountable and get a new perspective on her fitness journey. She says, “For someone who never could hold any fitness regime, I can now never live without my Peloton family”.

Meanwhile, in her dating life, Sarah was having less success. On dating apps, her choices were limited, and finding a compatible match was virtually impossible. Such is the way modern dating seems to go. We have endless ways to meet people but very few ways to actually connect.

Sarah was looking for someone like-minded. “Fit, ambitious, divorced, a parent, financially and emotionally stable,” she says. And while dating apps hadn’t proved successful on this front, Peloton did.

Sarah was connected with another Peloton user, Nick, through a Facebook group.

Her Peloton friends had told her they thought the pair would make a good match. After working out together a number of times and flirting online, Sarah and Nick moved to text. “We had a lot in common and spent hours on the phone chatting before we met”.

The pair met in person to run in a Peloton studio together in early 2020 and though their initial attraction didn’t progress much beyond this point, Sarah welcomed the chance to meet someone in a new way.

Unlike on dating apps, Sarah feels meeting Nick through Peloton offered a chance to bond in more meaningful ways and didn’t carry with it the same fears about meeting in person.

“There was an inherent trust. We knew too many of the same people. There was no concern at all. As a matter of fact, he had to travel from his state to NYC to run in the studio with me, and I spent the night with him in his hotel room. I didn’t think twice about it but would never do that with a different kind of ‘stranger’ I met on a dating app.”

After that night, Nick and Sarah realized they were better off as friends. “I just don’t think we saw a future dating,” she said.

While meeting on a dating app might carry with it some expectations, meeting via Peloton did not — and Sarah felt transitioning back to being “just friends” was seamless. “We don’t live in the same city but we speak via text very often, at least weekly. We always check in on one another.”

The next person Sarah dated — her current boyfriend of one year —was not a Peloton friend, but the two still bond over the fitness platform and are both active users.

She says Peloton flirting is relatively popular but has limited success.

“All the Peloton singles hope they can meet a Peloton guy but there are way more women than men so it’s pretty hard to meet a Peloton guy. There is a Peloton Singles group on Facebook but it’s rare any of the people in that group even hook up with each other.”

Peloton has over 1 million active users and counting, so like any good dating app, the pool is large — though not all of the users are single so tread carefully.

Unlike most dating apps, however, Peloton isn’t the most accessible way to meet new people. Peloton equipment can cost you up to $4000. But if the world of elite dating has ever piqued your interest, this could be a way to test the waters.

So if you’re missing flirting at the gym IRL, Peloton could be the place for you. And if all else fails you may at least find yourself some new workout buddies.