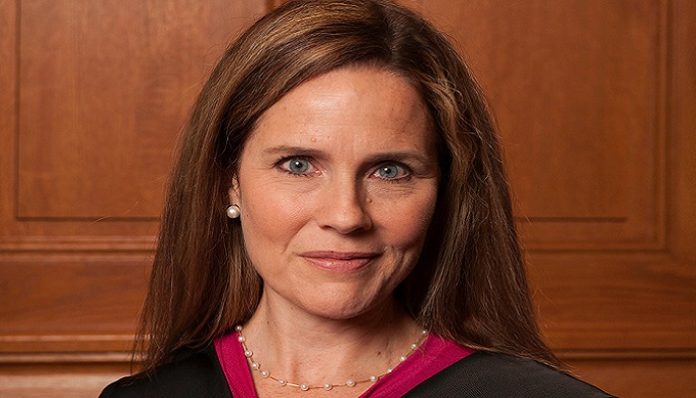 Yesterday, October 26, 2020, Amy Coney Barrett was confirmed to the Supreme Court of the United States. Surely, it was a joyful day for her and her family. But for everyone else, it should be a disgusting matter. Seven days, one week before the 2020 Presidential Election, we have this woman sworn into the SCOTUS.

Now, again, seven days before the presidential election, our president, Donald Trump, has pushed through this Supreme Court Justice for a lifelong term.

We have her whole life ahead of us. This woman? She is going to walk through every single door that RBG opened for women, and throw away the key. RBG was respected by all, no matter their political party — the Senate voted 96-3 when it came to her confirmation compared to Amy Coney Barrett’s 52-48 confirmation vote.

She’s not just pro-life when it comes to abortion matters, she’s anti-choice. She is a devout Catholic, and don’t get me wrong — there’s nothing wrong with Catholicism. But there’s a separation of church and state, right? Not for Amy Coney Barrett. In her religion, she firmly believes every decision — starting in early childhood and even involving something as simple as going on a date with someone — needs approval from a man.

In 2018, Barrett fought for a law brought on by none other than our current Vice President, Mike Pence, that would allow doctors to refuse abortions to women for suspected reasons. That’s right, not confirmed, but suspected. This goes completely against Roe v. Wade and truly shows us where she stands on this.

When brought to Senate, Barrett chose not to disclose two lectures she gave to anti-choice groups. They were only brought to light when Senate Democrats sent a letter inquiring about them. It is very concerning that she felt that these were not worth disclosing. If it’s not something that you know could cause issues, it should have been out in the open.

Barrett also chose to leave out the fact that she worked on a case where she defended a steel magnate — that drove a major Pittsburgh Hospital system into bankruptcy. Again, this was only brought to light when the Senate Democrats inquired. In the top ten cases she worked on, she listed three, and this was not on the list.

When asked questions about her stances on Roe v. Wade, The Affordable Care Act, and this information about the hospital system she helped drive into the ground, she refused to answer.

Amy Coney Barrett is asking us to turn back the clocks, not by an hour, but by decades. There have been many people speaking out against her, but unfortunately, this is someone that is now one of the most “respected” people.

Hearts dropped when she was confirmed to the SCOTUS, and for good reason. Her dishonesty, her behavior, and her stances on past rulings have shown us what we’re in for, and it’s not looking good. Barrett may be “qualified” for her position, but that does not mean she is right for the position. This woman is the embodiment of everything our mothers, our grandmothers, and all women fought against, and now she is in one of the most highly-regarded positions of power.

Yes, Amy Coney Barrett is not another “old white man” sitting on the bench, but she is actually much worse. This is a case of someone with qualifications that is not right for the position that she was granted. Ruth Bader Ginsberg fought for us. Amy Coney Barrett is giving us a whole new monster to fight against.