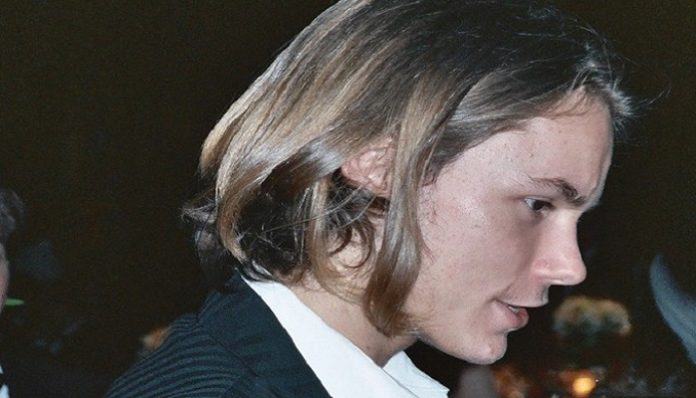 One of Hollywood’s most eccentric couples — Rooney Mara and Joaquin Phoenix — just welcomed a baby boy last week. Personally, I wasn’t too invested because tinsel town has been raining babies lately.

On top of that, there’s no denying Rooney and Joaquin are adorable together but I wouldn’t qualify them as my favorite celeb couple. Furthermore, Rooney’s public persona of “I don’t have a spare smile for anyone” has never really spoken to me. And you know, Joaquin is always a puzzling mystery in the public eye, which I can never tell if it’s a reflection of his true colors or if it’s all a publicity stunt. Those publicists are very smart these days — thinkers, those ones.

With reigning goth parents like Rooney and Joaquin, you just know this newborn came out in a black trench coat with arms crossed and a fully formed eye roll. But then something caught my eye: The new parents named this immediate style icon River, after Joaquin’s famous older brother who died of a drug overdose outside The Viper Room on Halloween night in 1993. Dark.

I’d vaguely heard about the tragic loss of River Phoenix before. But then, given the absolute boredom of my Thursday afternoon, I decided to Google this lost legend, and have you guys seen this prince?

I mean, no offense to Joaquin, but his older brother received the ‘hot’ genes. I’m talking absolute prince of darkness — think part Kurt Cobain, part James Dean but with the baby blues of our beloved Leo. I mean, these eyes were as deep as the fucking Atlantic, you guys. Additionally, his hair, effortlessly glorious with cascading layers upon layers, regal in the most legendary of ways. Just stunning.

So now, of course, I’m a huge fan. I’m completely reeled in and must know every detail about this gorgeous, deceased icon. And get this — it gets even better! Every woman’s dream is meeting a head-to-toe 10 who casually lets it slip that he spent his summers building schools in a country you can’t pronounce. This wasn’t River’s resume per se, but he was known for being especially empathetic and sensitive, with a mysterious brooding side — you know, that character trait that makes women wonder, “Is he checking me out or is he just deep in thought?” Gets me every time.

This was River Phoenix, through and through. This is why he drew people in. Well, I think he was a good actor too. But he was so different from everyone else around him. He was famous but completely disgusted with fame. He had the chiseled features of a model but hadn’t even seen himself that way.

River Phoenix was vegan, reserved, and completely detached from modern society. In a Vanity Fair interview, River said, “We are taught to consume. And that’s what we do. But if we realized that there really is no reason to consume, that it’s just a mindset, that it’s just an addiction, then we wouldn’t be out there stepping on people’s hands climbing the corporate ladder of success.” GASP.

River’s sister Rain recalls his deep love for humanity saying, “It’s a great feeling to think that I can be a friend to so many people through my movies.” Umm, are we melting from the inside out like a fucking menorah candle on the ninth day? The answer is abso-fucking-lutely.

Who was this pensive, unscathed yet sophisticated 23-year-old? Well, Wikipedia was like, girl listen to this: So the Phoenix klan was born to legit vagabonds; hippies who didn’t really practice social norms. The five children were given Earthy names like River, Summer, Rain, except Joaquin for some reason. They had no proper schooling, and at one point, the gang moved to Mexico and joined the Children of Christ cult.

After some time, the family moved to LA, and the children were placed on street corners to busk for extra change for the family. Hey, beats doing fractions.

Then, River was noticed by talent scouts. They saw dollar signs all over that kid. He was thrown into commercials and his siblings followed suit but mostly it was all about River. Naturally. He skyrocketed because of this mysterious aura about him and sure, we’ll call it talent but, we have eyes. This kid was majestic and I could feel all of this just by a few online photos and well, several hundred quotes. It was a rabbit hole, you guys. A deep dark, but gorgeous rabbit hole.

Basically, we learn there was so much more to River Phoenix — that his beauty was a mere footnote. That there was something alive inside of him, something we are all aching to have. And because of this, now I’m equally drawn to Rooney, Joaquin, and baby River, as they carry on this unique, enchanted but aloof essence — magic. Plus, born in 2020? That’s got to breed some interesting witchcraftery. Cheers to you, River.

Why Google Calendar Is An Organizational Game Changer