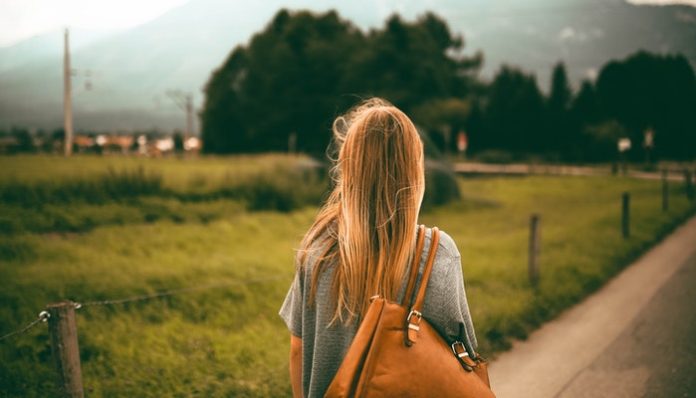 Everything is calm now, inside my head. All the mental yelling and screaming ended. All the panicked ‘get-me-outta-here’s have quieted down. Nothing remains but blanketing silence. My marriage ended.

We each had a handful of high school relationships before that. His were pretty innocent, mine were fairly traumatic. But still, it was high school, how serious could any of it have really been? Sexually, we both were each other’s first. We went off to college together, got married immediately after, and moved to California to work nonprofit jobs and save the world. We had a child, one that we both waited years to have and wanted whole-heartedly. Then, our marriage imploded.

So many times over the years people said “awwwww” to our story. They found it so enchanting. To them, we were the quintessential All-American, fairytale romance; the scenario people push on their kids as the ideal marriage prototype. Boy meets girl. Boy and girl fall in love. They tie the knot and only have sex with each other. They have a baby, are good citizens, and live “happily ever after” until they are rocking on the front porch together in old age. How precious.

Only it doesn’t actually work out that way.

The idea that someone can decide so young who and what is right for them and then be expected to stand by that decision for the next 60 odd years doesn’t seem romantic, it seems wrong. And I feel annoyed by anyone who hears the story of our coupling and finds it enchanting. I can’t believe people who say they felt shocked when we split up. Because when you reflect on the absurd odds stacked against us, I, for one, can’t believe we ever made it this far.

I knew it was going to end.

I remember distinctly the first time a voice in my head gave me an inkling that my marriage would soon be over: the night our daughter was born. The nurse came into the hospital room to help me use the bathroom for the first time after my arduous delivery. As I staggered wearily back to the metal-framed bed, the sympathetic nurse said, “Oh, honey, you look so exhausted.” At which point he stirred from his nap on the in-room sofa bed and groaned, “I am!”

The nurse and I exchanged an “Oye, men!” eye roll and she snapped back at him, “I was talking to the person who just squeezed a human being out of her body.”

“Oh,” he replied, and went back to sleep.

As I settled back into the bed, a cold sinking feeling slipped into the pit of my stomach. I pulled the crisp hospital sheets across my legs and heard the voice in my head say loud and clear, “You will be doing this on your own.”

He had an affair (I bet you saw that coming).

A month after our daughter’s first birthday, he left. Walked out. Said he just couldn’t “do this” anymore. He needed space to think. I asked if he was having an affair. He swore that he wasn’t. He was lying. Our therapist is the one who finally broke the news to me. She acted super twitchy at my individual appointment and kept asking me if we had talked. When I told her we hadn’t, she started talking in circles and implied he might be involved with someone else.

My heart stopped cold. I knew instantly who it was. The “she’s just a friend” gal pal from work. Their friendship had been a ticking time bomb of inappropriateness. Two weeks before he walked out, the two of them went to the movies together while I was at home with the baby working on a late night deadline. Apparently their “friendship” elevated to a whole new level that night. All of this hit me like a freight train as my therapist stared at me silently, pleadingly, waiting for me to connect the dots.

Suddenly everything around me evaporated. My peripheral vision went out. My throat closed up. Everything became this searing, blinding white light. I felt a sharp pain and a rush of heat shoot up the back of my head. And then the air in the room began crashing down on me like a weight. Oceans of pressure smashing me, smashing me, smashing me down into the seat. I couldn’t breathe and my head began pulsing and pounding. And then I heard it: a noise. A loud, sharp, cracking sound … deep down inside me somewhere. I actually heard it! My entire self splitting open.

Revisiting it all again in my mind, seeing the vulnerability and humiliation of that trusting girl I used to be (who to her core believed that “my guy” was not capable of being “that guy”), I realize that a part of me ended in that moment. That’s what the pain and the light and the cracking sound were – an execution.

Looking back on it now feels like watching a dog get shot.

I became a zombie.

We were separated for 6 months. He crashed at his boss’s house. I stayed with our daughter in our apartment and immediately began initiating steps to divorce him. I remember going to the courthouse and waiting in line to pay for the do-it-yourself divorce papers. There was a big line that day and it seemed everyone was there for a marriage license (of course). I felt so ashamed to be there. Like people could see it on me … that girl was betrayed!

When it was my turn in line, I said quietly “I need divorce papers, please.” The sturdy woman behind the glass, needing to know which stack of forms to give me, asked, “Are there children involved?” My heart wrenched inside my chest and I squeaked out a very broken, tear-choked, “Yes.” Everyone in line stopped and looked at me. It took every ounce of strength I had not to dissolve into a weeping puddle on the clerk office floor … and everyone knew it.

We moved to Florida to get away from the scene of the crime. Due to some positive realizations that had emerged in therapy, we decided to give things another try after the move “for our daughter’s sake.” We gave it four more years, and every day of it felt like the movie Groundhog Day (only not remotely funny). We removed ourselves from the place everything happened (and the other woman), but the dynamics that caused the affair never changed.

I spent every day of the next four years going through the motions with a fake smile plastered on my face. But I was dead behind the eyes. The internal shattering that occurred in the therapist’s office left a void and there was no coming back from it. Not with this man. Not in this life. And my daughter deserves better than a numbed-out mom.

So, I finally said the words out loud to him: “I want a divorce.”

An odd calm settled over us and we were able to really look each other in the eye for the first time in years. We were never really happy together. So, maybe finally letting each other go as husband and wife was the most loving and honest thing we’ve ever done.

I made a vision board and hung it on the wall across from my bed.

It’s the first thing I see when I wake up and the last thing I see before I go to sleep. It’s crafted from a piece of white drugstore poster board that I adorned with images and words cut ceremoniously from magazines and internet photos, each a symbolic representation of some facet of the life I want to manifest for myself as I move forward. Images of my life to come, if I get my way. It hangs humble, yet earnest. My future pasted together with a 5-year-old’s glue stick.

He stopped wearing his wedding ring a long time ago.

Just like when he moved to the sofa under the guise of the flu, and never came back to our marital bed, he removed his ring under the guise of work. He was working on a mural and I found the ring sitting all alone on an empty shelf in his work space. It sat there untouched for two weeks before I took the ring and hid it in my jewelry box to see if he’d notice it missing and come looking for it. He never did.

Finally, I brought it up. He said he took it off because it hurt his hand while working and he just hadn’t put it back on yet. I said that it was important to me that he put it back on. He said there was no latent meaning behind his not wearing it. I said that the ring is our symbol to each other and to the world that we are married. I said that choosing not to wear it, knowing how much it would upset me, most certainly had meaning. He said he understood why I might feel that way. He did not put the ring back on.

I took my ring off 6 months later.

Figured: f*ck you! If you aren’t wearing yours, I’m not wearing mine either. But my finger felt vulnerable and naked. I’ve worn that ring every day for more than 13 years. I never really cared for the ring, I’d just gotten so used to wearing it. He hated my ring. Hated it! He purchased it when we were fresh out of college, paying for it in a seemingly unending stream of micro-payments: $5 here, $25 there. By the time it was paid off, he deeply resented that ring. Probably frustrated by having to spend the money when we were just starting out and totally broke. It kind of feels like we’ve always been broke.

The other day, I decided that I need to find myself a new ring. A gift to myself. Something symbolic of the change I am making in my life. I fully admit that I am an overly-symbolic person. Not wearing a ring during this transition doesn’t feel right. When I first took my wedding ring off, I started wearing other rings on that finger to feel less emotionally naked; only those were meant for other fingers and were way too big. For months I’ve used double stick tape to hold my decoy rings in place.

I’ve decided that a new ring is absolutely essential and I’m on the hunt for just the right one. Nothing flashy. Nothing extravagant. Just something to slide on my size-5 finger that restores my symmetry and honors my commitment to myself: to fly, to soar, and to muster the courage to leap from the nest.

“With this ring”… do I promise to show myself love, patience, kindness and unfailing courage? I do. I absolutely do.

Feature Image by Tobi from Pexels