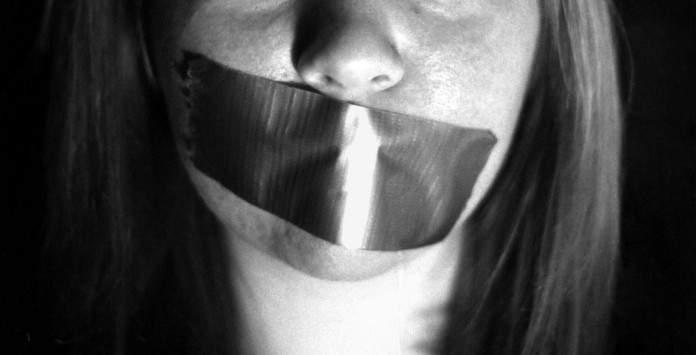 One of my not-so-proudest moments at college happened when I slapped a guy in the middle of our most popular bar. Now, before you judge, I had a good reason, so let me explain. This guy, whom I didn’t know, for some reason or another decided to get in my face and start something. Normally, I would just ignore a jerk like this, but then he called me a name I have absolutely no tolerance for –a c*nt. So – in a moment of rage – I smacked him, jumped over a chair and sprinted out of the bar.

Moral of the story: Slapping guys in bars is a quick and easy way to look like a crazy person.

But the more important moral of the story is that it’s time we stop throwing around the c-word as an insult. It’s rude, offensive and degrading to not only the person you’re saying it to, but to all women everywhere. Although the word’s meaning started out as literal, it is now regarded as the number one offensive word, according to a 2000 BBC study. Using c*nt as an insult is especially degrading because it uses a woman’s own body against her: it suggests that a woman’s body part is vile enough to use as a slur. There is nothing worse than being made to feel like one’s own being and body is so despicable that it warrants its own insult. C*nt is a word we shouldn’t hear being used carelessly, but all too often we do. Girls use it to describe other girls, guys use it to describe girls and, hell, The Wolf of Wall Street even used it three times (in addition to 569 variations of f*ck).

Putting an end to the casual use of this insulting word starts with women. We’re guilty of using the c-word as a derogatory slur, even though it’s particularly offensive to us. When a woman uses a term like c*nt to describe a fellow woman, it decreases society’s sensitivity to the word. It sends a message that says: if a woman is okay with using an offensive female term to attack another person, then it’s acceptable for everyone else to use this term, too.

Words like bitch, slut and whore are prime examples of what happens when society lowers its sensitivity to offensive remarks. These words come up multiple times in casual conversation; sometimes, they are not even used at insults. It’s normal to hear a girl tell another girl she’s been acting like a slut, and most of the times, it isn’t even that offensive. We became so lax that a word like slut, which means a dirty, promiscuous woman, can casually be used to describe a girl who was not really acting in that manner.

As a society, we’ve become sensitized to most curse words (such as the use of f*ck in The Wolf of Wall Street). Walk down the street and you’re bound to overhear words like bitch, asshole, dick and variations of f*ck in everyone’s casual conversations. And most of us don’t even blink an eye when we hear these words.

With the path society is headed down now, it wouldn’t be a surprise if eventually we all became desensitized to the c-word. And what kind of world would that be where we’re all perfectly fine with hearing the most vulgar and offensive word used in everyday conversation? Imagine your life 20 years down the line with three young children. And instead of your kids calling each other buttheads or buttfaces like today’s children do, they’re calling each other c*nts – and that’s normal for society. That’s where we’re headed now, and I hope I’m not the only one who has a problem with that.

What You Don’t Know About The Business Side Of The Entertainment...