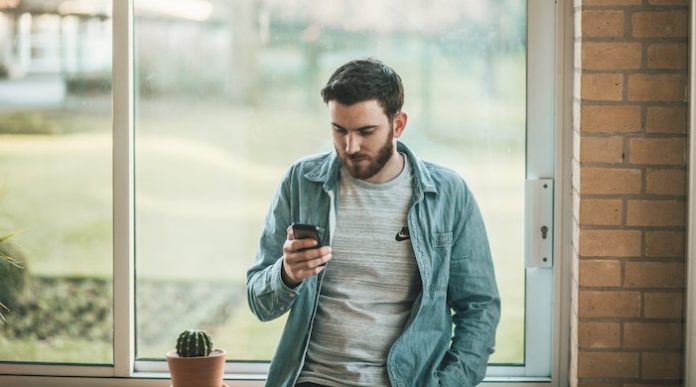 In the world of modern dating, texting is a huge part of making a relationship work. Whether it’s the speed with which someone replies, their tone, or how frequently they text, their texting style totally matters when building a relationship. The importance of being able to have constant communication with your partner is key to making a relationship last. But before you even get to that stage, how can you tell, via text, that he wants you?

Here are 14 signs that he wants you:

If a man wants to talk, he’ll reach out and talk to you. He’ll even lead the conversation until you two find your effortless flow of endless conversations.

2. He keeps the conversations going.

You could hit him with a “LOL,” and he’ll still manage to find a creative topic to talk about next just so he can talk to you.

He makes sure that the conversation isn’t always about him and he’s asking questions about you — he wants to know how your day went and about you as a person. It’s a nice change for once and you’ll notice it.

4. He tries to make you laugh.

It may be hard to do over text, but if he tries to make you laugh with a pun or a bad joke, he’s really trying to impress you. And if you had a bad day, he’ll at least say something to make you smile.

If he can text you while drinking with his friends and in those rough (and honest) stages, he’s clearly still making you a priority and hinting at something more serious.

6. His spelling is pretty good.

Not everyone is a grammatical genius. But if they have decent spelling and grammar, they’re probably being careful to impress you with their intelligence. Let’s face it, it’s unattractive when a guy can’t spell or simply doesn’t care enough to send you complete sentences.

It’s refreshing when a guy avoids talking about sex because it shows that it’s not a priority for him — and not the only thing he’s after. You’ll get the vibe immediately if he does.

8. He tells you about his past.

Someone who doesn’t shy away from their past proves there’s nothing to hide. It also shows that they want you to get to know the real them. It proves he’s open and trusting of you.

Even though he may not always see you physically, he will still throw in a compliment as though he sees what you look like at that very moment.

10. He sends you good morning texts.

It sounds super corny and high school-ish, but it’s a kind gesture. It means a lot if you want someone to wake up thinking of you or with a positive thought for the day.

It doesn’t take hours on end to reply to a text message unless he’s busy at work — and if that does happen, he explains and usually apologizes.

Most guys don’t frequently use emojis. So when he actually does, he’s trying to imply something and be playful. They wouldn’t do it with the boys, would they?

13. He asks about your future plans.

When a guy does this it’s because he’s secretly trying to plan out his week in hopes of seeing you. Even if he doesn’t initiate because he’s shy, it’s a big hint they’re interested.

If you think he’s hitting on you, he probably is. And he’ll potentially tell you he has feelings from time to time to keep you from guessing.

It’s hard to tell if someone likes you solely through online interactions, but the subtle hints listed above will help you get a better picture of his intentions and feelings. Obviously, it’s easier if he just tells you in person. But in a generation where people are afraid of putting themselves out there, I’d say it’s easier to use these tips.

Photo by Thom Holmes on Unsplash

10 ‘Logical’ Reasons Dating Should Be Exactly Like ‘The Bachelor’