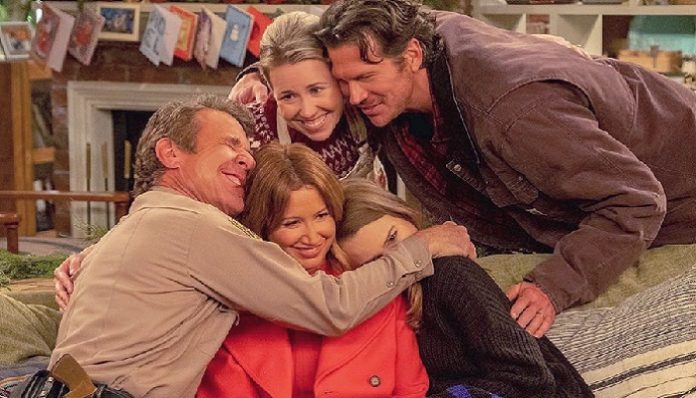 Netflix just dropped their new mini-series Merry Happy Whatever over the weekend in order to celebrate the kick-off to Christmas. Turns out, it’s one of the best shows Netflix has created in a long time.

Created by Tucker Cawley, who worked on shows like Everybody Loves Raymond, Merry Happy Whatever is a Christmas sitcom. It’s about Emmy Quinn (played by former Disney star Bridgit Mendler) returning to her family home in Philadelphia for ten days for Christmas with her new boyfriend (portrayed by Brend Morin), Matt.

However, much like a lot of families around the holidays, the Quinn family is freaking crazy.

To sum it up, you have the overprotective father Don (played by Dennis Quaid) desperately trying to ensure his Catholic family continues important Christmas traditions. Emmy’s poor new boyfriend, on the other hand, desperately tries to get her father’s approval yet fails each time. Then, you have his four kids and their families all going through their own mini conflicts, personal issues, and relatable storylines.

It reminded me a lot of the show 8 Simple Rules in the sense of the family dynamic and quality of humor. Everybody had a dad who desperately wanted to stay in his kids’ lives. Similarly, everybody had siblings who are trying to break free and feel bad doing it. And quirky mishaps that happen from time to time that bring out the best and worst in everybody are very relatable.

I have to say, I became instantly obsessed with Merry Happy Whatever for plenty of reasons.

In addition to the comedic aspect, as it’s full of witty one-liners and plenty of banter, I loved that they single-handedly described what every family experiences around the holidays. And despite only being only eight episodes long that are approximately 22 minutes each, they covered a lot.

We saw plenty of fights, a desperate dad trying to keep his sanity while monitoring his children’s actions. There are also discussions about different religions, football viewing party etiquette, tackling a mall, falling in love, failed relationships, infertility, sneaking off to have sex with a full house of people, meeting your in-laws, coming out, and new career ventures. That’s a lot for a short time, but it worked flawlessly.

My favorite part about the whole series is watching the hilarious group of in-laws (or as they labeled themselves, Quinn-laws) teaching Emmy’s new boyfriend how the family works around Christmas. And, most importantly, how to deal with the dad.

The show’s messages of warning, secret meetings, life tips, and predictions were equally as hilarious as the chemistry between actors. Those moments made me think of my family and all of the in-laws on my mother’s side sticking together through the chaos too. Even the storyline of a new boyfriend or girlfriend – they too give them plenty of warnings and expert advice.

Moreover, in a touching turn of events, Kayla (played by Ashley Tisdale), captured every viewer’s heart with a refreshing storyline. Her character had the most growth and was accompanied by a unique personality. Overall, she was enjoyable to watch as she had chemistry with every actor. Her energy and ability to change from happy to emotional seemed incredibly natural. And she represented the type of person that is rarely on TV. (I’m not giving any spoilers, but you’ll know what I mean when you watch it).

Overall, it’s a feel-good show that makes you laugh, cry, reminisce and captivates your attention. I really enjoyed the series and seeing that I wasn’t alone based on how much praise it was also receiving online.

It’s not often that sitcoms come off as natural and not cheesy, but Merry Happy Whatever did it flawlessly. Maybe it was because they show a lot of different people and personalities that make up a family. And this made it more relatable. Regardless, I could see the show having another season due to the success in its first few days out.

While news of a second season has yet to be announced, there are so many other holidays that the show can tackle with new storylines to be explored. There is so much room for something even better! Even Bridgit Mendler has a few ideas for how the series could move forward.

“What would a season around Halloween look like? Valentine’s Day? What can we do?” Mendler said in an interview with Elite Daily. “I think it would just be fun to be with everybody again.”

Hopefully, the series will be renewed for season two. And if so, I predict it’ll be announced soon. Until then, I’ll keep praying for that Christmas miracle.

Merry Happy Whatever is streaming now on Netflix.

3 Lessons Growing Up In A Military Family Taught Me