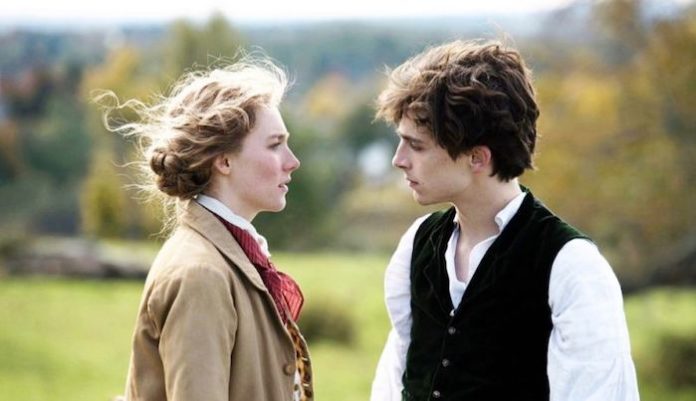 If you’re a movie buff like I am, then you know that as the New Year looms ahead, so do the promise of Oscar buzz and predictions. I’m already impatiently waiting for this year’s Oscars… But before we get too excited about awards season, we need to talk about the movies coming out in the tail end of 2019. There are some big ones!

Here are all the best movies coming out before the New Year:

Daniel Craig, Chris Evans, Jamie Lee Curtis, and LaKeith Stanfield star in this crime-comedy. It’s about an eccentric, dysfunctional family under investigation. This movie looks like a fun and ridiculous romp.

Daniel Kaluuya fans rejoice. He’s back with Jodie Turner-Smith in this drama, in which a young couple are pulled over by the police on their first date. They end up having to go on the run together.

Eddie Redmayne and Felicity Jones star in this adventure set in 1862. A meteorologist (Redmayne) and a daredevil balloon pilot (Jones) team up to fly higher than anyone in history. Their perilous journey results in a fight for survival as they face both physical and emotional challenges in the air.

Portrait of a Lady on Fire

This French film won Best Screenplay at 2019’s Cannes Film Festival and is said to be one of the best of the year. It’s set in 18th century France on an isolated island in Brittany. A young painter, Marianne, is commissioned to do a painting of a young bride without her knowing. As the two women spend more time together, intimacy and attraction grows, with Heloise’s impending marriage looming over them.

Anthony Mackie, Samuel L. Jackson, and Nicholas Hoult join forces in this drama, based on a true story. It’s about two African-American men in the 1950s. They hire a working-class white man to help them build their empire and become the first African-American bankers in the US.

Plant lovers might think twice about seeing this eerie sci-fi film. It’s about a scientist who brings one of the plants she is breeding home for her son. The plant, which is supposed to be an antidepressant, becomes less harmless than its creator thought.

A small town detective and his family are haunted as he investigates the disappearance of a young boy.

A young writer who is an addict nearly hits rock bottom and checks into two months of detox at a treatment center There, he meets a group of interesting characters.

Jumanji: The Next Level

Fans of The Rock rejoice, because the star is back for another blockbuster action movie. This sequel to 2017’s Jumanji reboot sees the gang reunite in the game to rescue one of their own, but find the game has changed since they were last there. The group must brave the unknown to survive the perils of the world’s most dangerous game.

In this Christmas-time horror movie, a stranger slalks a group of female university students during their winter break. Soon, they uncover that the killer is part of a larger, underground conspiracy at the school and they must fight back.

When a bomb exploded at the 1996 Olympics, security guard Richard Jewell saved thousands of lives, but was vilified by journalists and the press who falsely report that he was a terrorist. This drama, based on real events, stars Olivia Wilde, Sam Rockwell, Kathy Bates, and Paul Walter Hauser, and is directed by Clint Eastwood.

This is an Adam Sandler movie unlike those we’ve seen before. In this highly acclaimed film, Sandler stars as a charismatic jeweler who makes a series of high-stakes bets that could lead to the windfall of a lifetime. Howard must balance business, family, and adversaries in his pursuit of the ultimate win.

Kristen Stewart stars in this political thriller as actress Jean Seberg, who the FBI targets because of her political and romantic involvement with the civil rights activist Hakim Jamal.

Hold on to your hats, folks, because this is a big week in movie-releases!

Star Wars: The Rise of Skywalker

The final instalment of the Skywalker trilogy is finally here. Star Wars fan or not, this is a big one. The Resistance is still hanging on and Rey, Finn, and Poe Dameron must face the First Order once more as the final battle begins.

I’m sure few of us were prepared when they released the Cats trailer earlier this year, but we’d better be ready soon because it’s almost here. This adaptation of the hit Broadway show follows a group of cats called the Jellicles who, every year, must decide which of them will ascend the Heaviside Layer and be reborn to a new life.

Charlize Theron, Nicole Kidman, and Margot Robbie team up in this drama based on the true story of a group of female Fox News employees. They took on the toxic, sexist culture within the network, which led to the downfall of media mogul and head of Fox News, Roger Ailes.

This Greta Gerwig adaptation of Louisa May Alcott’s beloved novel is my most highly-anticipated movie on this list. Join the March sisters, Amy, Jo, Meg, and Beth, as they navigate life, love, and sisterhood in their post-Civil War world.

This First World War drama sees two young British soldiers given a seemingly impossible task: deliver a message to enemy territory. This will stop their own men and cause one of the soldiers’ brothers from walking straight into a deadly trap.

This animated spy-movie stars Tom Holland, Will Smith, and Karen Gillian. In this film, the world’s best spy turns into a pigeon and must rely on a nerdy tech officer to survive and to save the world.

Prison warden Bernadine Williams confronts the psychological and emotional demons of her job after years of carrying out death row executions as she has to execute another inmate.

There are still lots of great, interesting movies that are coming out before the New Year! 2019 was quite the year for movies, especially with the release of movies like Avengers: Endgame, Lion King, and The Irishman. If this year gives us any hope of what movies can do in the modern age, then I cannot wait to see what 2020 will bring to the big screen!

Let us know what you’re excited to see on this list or what your favorite movie of the year was!