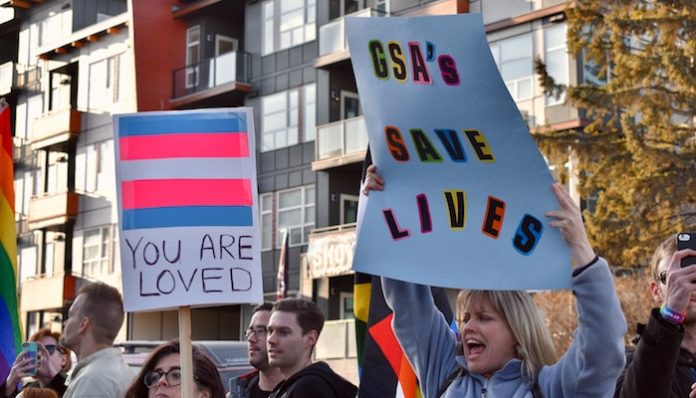 Transgender Day of Remembrance (TDoR) began in 1999 as a vigil for transgender woman Rita Hester, who was stabbed 20 times in her own apartment in 1998. We now observe this important holiday annually on November 20th. On this day, we honor those who’ve been killed as a result of transphobic violence.

According to Transgender Day of Remembrance founder Gwendolyn Ann Smith, this holiday “seeks to highlight the losses we face due to anti-transgender bigotry and violence. I am no stranger to the need to fight for our rights, and the right to simply exist is first and foremost. With so many seeking to erase transgender people, sometimes in the most brutal ways possible, it is vitally important that [we remember] those we lose and… we continue to fight for justice.”

Many local and national LGBT organizations and charities mark Transgender Day of Remembrance Day with vigils or events that often include a reading of the victims’ names.

Concurrently, the Transrespect vs. Transphobia Worldwide team, which monitors the number of transphobia-related deaths across the globe, updates and publishes the Trans Murder Monitoring (TMM) research project.

Since the project began in January 2008, 3314 transgender individuals from 74 different countries worldwide have been killed because of how they identify.

Alarmingly, these numbers don’t reflect the actual scale of transphobic violence. However, the FBI highlighted this in a recent set of figures. Despite an overall decrease in crime across the US, violent hate crimes are at a 16-year high. It seems that increased visibility and awareness of the transgender community correlates with the frightening 41% surge in gender identity-based hate crimes. Furthermore, since 2017, a jaw-dropping 168 crimes in the US targeted transgender and gender-nonconforming people.

What’s more, none of these numbers reflect the transgender lives we lose to suicide. In a 2018 study, the American Academy of Pediatrics highlighted the prevalence of transgender suicide. The study revealed that trans and non-binary youth are at a greater risk of suicidal behavior than their cis-gender peers.

The study concluded that creating supportive, safe environments for transgender youth is vital to combating the frightening transgender suicide epidemic.

But even the statistics don’t paint the full picture of the transgender lives we’ve lost and the struggles that the trans community faces.

Many who consider themselves advocates for equality draw the line at transgender inclusion, protection, and pronouns. This harms the transgender community just as much as the overt violence inflicted upon it!

Only by listening to the trans community can we begin to see transgender life more clearly. Our privilege spectacles restrict our vision. This means we can’t see, appreciate, or believe in issues outside of our own sphere. We need to listen to what trans individuals say they need because their safety, happiness, and lives are at stake.

Trans people aren’t attacked, murdered, bullied, or oppressed because of who they are.

On the contrary, transgender people experience invalidation and violence because our society refuses to accept them for who they are. And it needs to change.

So, this Transgender Remembrance Day, honor the memory of the dead by making changes that protect the living. Remember the humans that are behind the headlines and memes. Share the stories that don’t make headlines. Follow Transgender-friendly social media accounts. Raise awareness of the issues the transgender community faces. Support laws that protect and enhance transgender lives. And of course, challenge transphobia wherever you see it, especially within yourself. If you respect their rights and preferences of the transgender community, you might just save a life.