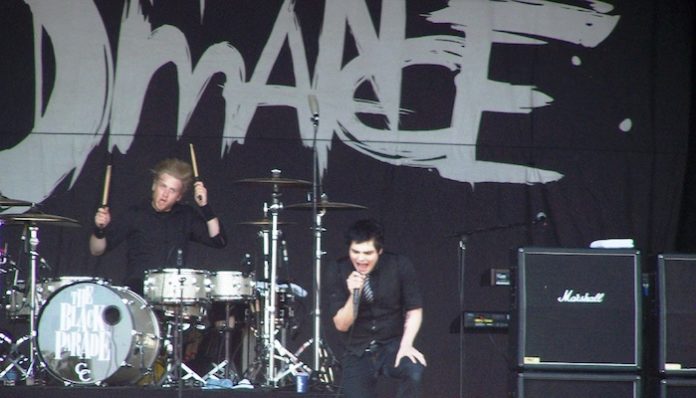 Popular mid 2000’s punk emo band My Chemical Romance surprised fans this Halloween by announcing their decision to reunite after almost 6 years since their infamous breakup.

Fans freaked out early yesterday when they saw the band released some new merch and created an Instagram account. Then it hit them that Halloween marks band mate (and my crush) Frank Iero’s 38th birthday. I think all fans thought the coincidences were adding up.

And then it happened.

MCR dropped the surprise of the century by announcing an intimate reunion show last night via Twitter.

And that’s when the killjoys (aka their fan base nickname) collectively lost their shit.

Even a very specific comment on their YouTube page created headlines making some believe that their breakup wasn’t due to conflict within the band, but was a much needed break from their successful and chaotic career.

And of course, a lot of people are bringing back cringe-worthy, fan-made YouTube videos that we loved back then but are slightly embarrassed to have loved now.

MCR broke barriers for the underground music scene back in the day. Plus, they almost had a cult-like following with their few massive hits. They broke mainstream music but still didn’t have the in-your-face popularity other bands had. Yet their fan base was intense and die hard for their boys in black.

To sum it up, My Chemical Romance had the closest thing to “boy band” fan craze as a rock group could. They had fan clubs, fan fiction, meet ups, and intense passion for their beloved band. Any emo fan would credit MCR for helping to create the genre with hits like “Helena”, “I’m Not Okay” and “Welcome to the Black Parade”.

The band broke hearts on March 23, 2013, with a short statement posted to their website, thanking fans for being “part of the adventure”. So to see that they happened to announce all this news with a short tweet isn’t anything short of what we expected from them… Well wished for but didn’t quite expect.

They accomplished a lot in their 12 years as a band and I’m thrilled to see fans are still being as receptive to them coming back as they would have been 6 years ago. Although they are only planning a one off show, hopefully the potential and warm reception will pursue them to do a mini tour. Or maybe an album? Or some music videos? Hell, just make it a full on comeback.

So congrats killjoys, this one’s for us!

To The Couple Who Needs To Get Out Of Each Other’s...