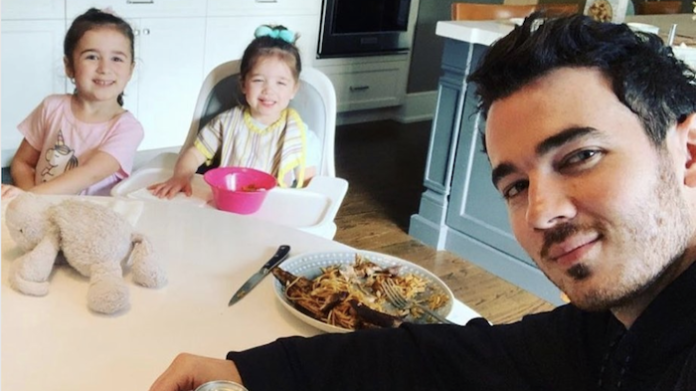 Fans around the world were overwhelmed with excitement when the Jonas Brothers announced they were reuniting for a new album and new tour. However, a lot has changed since the last time we saw this trio perform as a group. There’s one big life event in particular that happened: Kevin became a dad.

Not only do we get to see the boys with their wives, but also have the joy of getting a glimpse into Kevin’s family life. What’s better than adorable videos and pictures of Kevin’s two daughters, Alena and Valentina, having a blast with  their dad and uncles on the road?

If you aren’t a Jonas fan already, you definitely will be after checking out these social media posts.

Plus, if we thought you were a Jonas Brothers fan, you haven’t seen how passionate of fans Alena and Valentina are. I mean, they adorably celebrated the band’s number one single Sucker to begin the summer in this cute video taken by Kevin’s wife, Danielle:

The two girls have also been known to play the band’s music in their own mini band on more than one occasion. But in their mini play section at every arena, they’re often seen creating their own performances like this:

And, they’re seated front row every chance they get:

Oh, and did you know they make signs for their daddy and uncles?! And, of course, will always get recognized in the middle of a show:

My sign never got noticed, and here they are at 3 and 5 years old making waves. It’s hard to be mad though.

They also have the best tour merch. Recently, Danielle made them shirts that read, “Not to brag, Kevin’s our dad.”

If that isn’t “goals,” I don’t know what is. And to be honest, this is the kind of stuff I would do if I ever had a famous husband and baby daddy, so Danielle is doing it right!

Plus, they’ll always have people to lift them up high so they can get the best views.

They’re also getting to experience new things like what it’s like to live on the road. Most recently, their mom uploaded this adorable video of the girls playing in their bunks on Kevin’s tour bus.

I bet that made you smile and giggle. (And probably feel really jealous.)

And they’re having the most unbelievable backstage access to the band. I mean, look at them with their uncle Nick!

And their uncle Joe too!

Plus, not only are they getting to enjoy free Jonas Brothers shows, they are traveling all over North America and seeing the best places in the world:

Oh, and they’re doing it with their very famous and successful aunts:

But, are we really surprised that these little girls are living their best lives? They’ve been Jonas Brothers fans since birth when the band wasn’t even together! Look at this throwback of baby Alena dancing to Kevin playing an original JoBros song:

But they are obsessed with the bands new stuff too:

Needless to say, this is the content we didn’t know we needed this summer. It makes fans feel at peace by watching how pure these little girls are. They’re just as excited for this reunion even though they don’t quite understand how special it is.

What are you loving most about the Jonas Brothers reunion? Tell us in the comments!